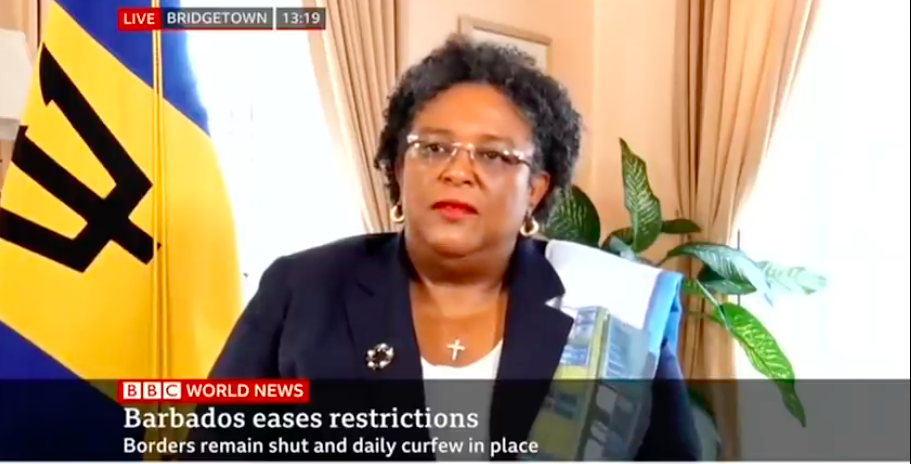 Prime Minister Mia Mottley remains adamant that Barbados' lone airport will not be resuming commercial flights until it is safe.

As countries globally reopen their borders for tourism and domestic or international travel from the end of May and in June, Barbados' leader is not moving from the government's stance that Barbados will not be pressured to reopen.

And this time her comment was made on the global stage.

Despite the Caribbean region being heavily dependent on the tourism sector the CARICOM chair and Barbados Prime Minister Mottley has re-emphasized that the tourism-dependent country does not have any plans to reopen for tourism just yet.

Barbados initially imposed a curfew on March 28 and it has extended numerous times since then. From May 17, the Government extended the curfew to May 31.

The Barbadian Prime Minister disclosed that her Government has been in discussions with the airlines and cruise industry about a health and safety protocol going forward. She reasoned that the issue of testing needed to be addressed to minimize the possibility of importing a second wave of the coronavirus disease 2019. Mottley indicated that officials were exploring whether travellers would be tested before or after their flight.

"We need to make sure that we touch all the bases and to that extent, I think the airlines have done a reasonably good job in trying to ensure that the planes can be kept sanitized far more than they have been but the big issue is testing and testing before people get on the planes or testing before they arrive,” said Mottley.

“Quite frankly, it is more practical before people leave and we need access to rapid test or test protocols that will allow us to be able to determine what is the risk that we are going to take if a person is tested 24 hours before or should the person be tested within a matter of hours before going to check-in,” she further explained.

The CARICOM head revealed that it's not just Barbados, but the CARICOM member states on the whole are attempting to cover all their bases with health officials to ensure there isn’t a second wave of COVID-19 regionally via importation. Speaking on BBC World,  Mottley said that the member states were working on a regional public health protocol to ensure the safety of its citizens and visitors.

"The individual countries are going to make sure that we touch all the bases because it is not our intention to import, it is not our intention to have anyone be infected but at the same time we have to balance the reality that the Caribbean is the most travelled, if not the most travelled and trade-dependent region in the world with 50 per cent of our GDP effectively coming from it."

Mottley's comments echo those by Barbados' Tourism Minister Kerrie Symmonds during a recent press conference with local media to update on the status of reopening in Barbados. It was held on May 21.

This is the second televised interview with Mottley that has been televised. On April 29, she was featured on CNNi's Amanpour.