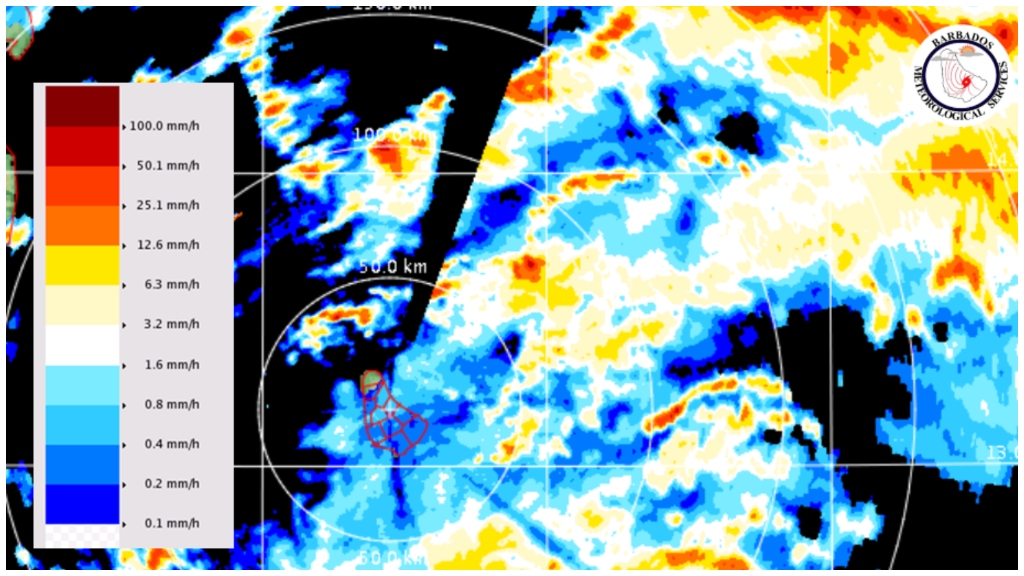 Radar image from the Barbados Met Office for October 29.

The Flood Warning remains in effect.

According to the Barbados Meteorological Service promised 6pm update, the Flood Warning will continue and will be terminated at 6am tomorrow, Friday (October 30) or sooner if conditions warrant.

A Flood Warning is now in effect for Barbados.

The Flood Watch has been upgraded to Flood Warning as of 12:14 pm. The Small Craft Warning and High Surf Advisory also remain in effect for Barbados.

A Flood Warning is issued when flooding is occurring or is imminent within the warning area.

Barbadians can expect another update at 6pm unless conditions warrant otherwise.

Barbados is under its second Watch in 24 hours, however, this time it is a Flood Watch.

Issuing an alert from 10 am today to be updated at 6pm, the Barbados Meteorological Service is advising that the Flood Watch may be upgraded to a Flood Warning later today if conditions warrant.

Flood Watch is issued when the conditions are favourable for flooding within the watch area. It does not mean that flooding will occur, but it is possible.

A tropical wave interacting with an upper-level diffluent pattern is presently affecting the island and is generating continuous light to moderate rain. These features are expected to generate rainfall accumulation of up to one to two inches during the afternoon.

Over the past 24 hours, two to three inches of rainfall was recorded across some sections of the island and has resulted in large settlements of water over fields. Due to the already saturated nature of the soil, any additional rainfall is likely to cause flooding.

In addition to this, occasional gusty winds may cause an odd tree to fall.

Residents and visitors should note that the following impacts are imminent during this forecast period :

Significant delays on traffic routes with some roads possibly impassable.

Significant flooding at the foot of hillsides and coastal roads is possible.

Synopsis: An upper-level diffluent pattern in association with another tropical wave is affecting the island.

Synopsis: An upper-level diffluent pattern in association with another tropical wave is affecting the island.