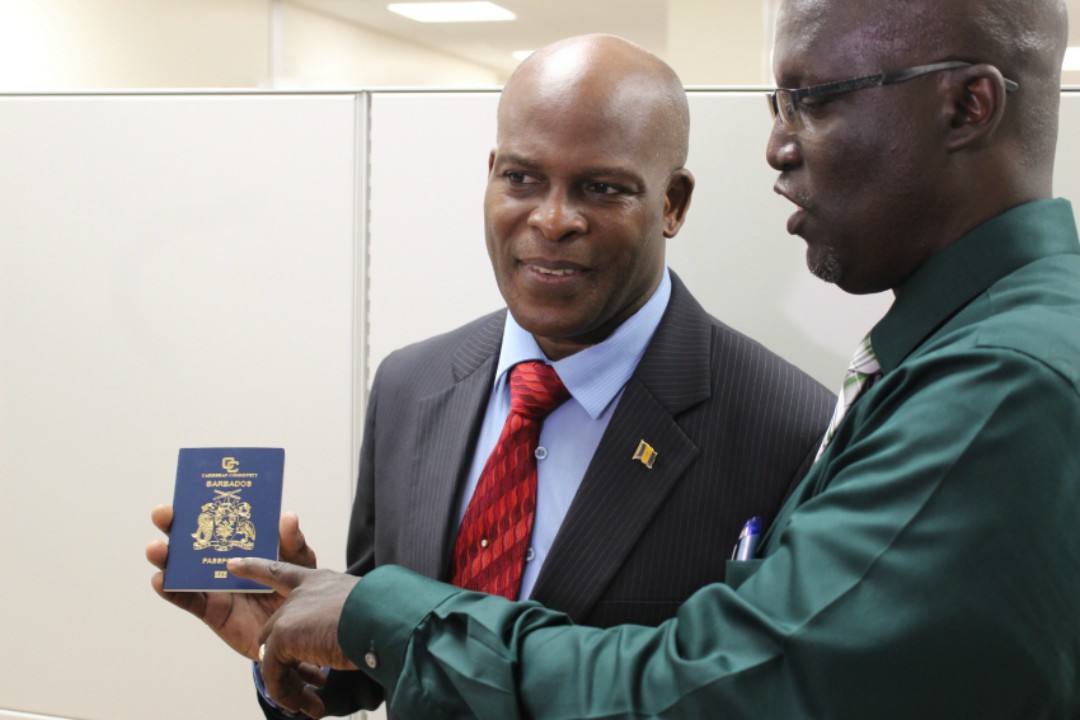 Minister of Home Affairs, Edmund Hinkson and Chief Immigration Officer, Wayne Marshall, showing one of the new e-passports, which are biometrically enabled with a chip and antenna in the cover. (M.Elcock/BGIS)

Persons applying for Barbados passports for the first time, or those seeking to renew them, will now be issued with an e-passport.

This comes as the Barbados Immigration Department commences the phasing out of the machine-readable passport for the e-passport, following a recommendation by the International Civil Aviation Authority as the new standard to be adopted for travel document issuance.

Chief Immigration Officer, Wayne Marshall, explained that the e-passport was a biometrically enabled passport with a chip and antenna in the cover that increased the security features.

“It would be more difficult to replace an e-passport because there is a chip in the actual cover. Anyone seeking to replicate the passport would have to remove the chip and ensure that it has the same information as on the biodata page,” he said.

Marshall added that the chip would capture the same biometric information – facial representation and biodata – as the machine readable passports. However, the Chief Immigration Officer pointed out that the computer chip in the cover could not be easily accessed, replicated or changed, thereby enhancing the security feature of the passport.

Marshall said that the more security features a passport had, the more accepted it was by countries around the world. “Barbados is moving towards it because of the security features and to maintain the high standard of the Barbados passport,” he stated, adding Barbados ranked highest among Caribbean countries that do not require a visa for entry into most countries.

However, it is a standard which all Caribbean countries will have to meet over time. Once fully implemented, persons would not have a choice as to if they should get an e-passport or not, as the machine readable passports would be phased out.

Marshall indicated that the application process was the same for those persons renewing or applying for passports for the first time. They should visit the website www.immigration.gov.bb, and set up an appointment.  The e-passport would be issued within 10 working days.

The adult e-passports will be valid for the usual 10-year period, while the children’s would be for five years.