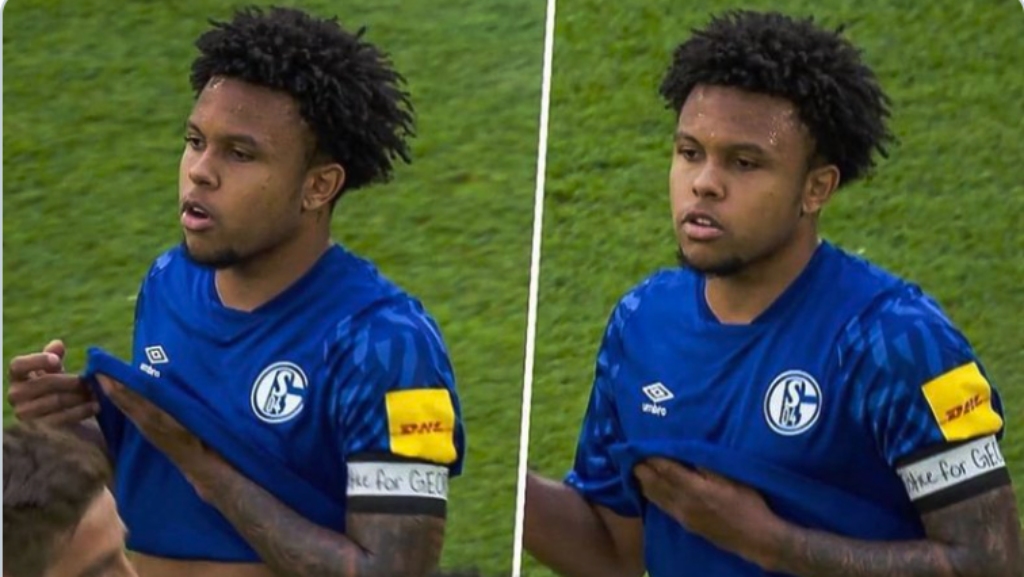 Schalke may have lost their match but one player used his platform to call for Justice for George Floyd who died in Minnesota.

Weston McKennie had the handwritten message “Justice for George” on white tape around his left arm while he played.

"To be able to use my platform to bring attention to a problem that has been going on to long feels good!!! We have to stand up for what we believe in and I believe that it is time that we are heard! #justiceforgeorgefloyd #saynotoracism"

McKennie who is a Schalke and US national team midfielder played wearing the armband referencing the death of George Floyd.

His protest came in the wake of Floyd’s death in Minneapolis after a white police officer pressed a knee into the 46-year-old black man’s neck for more than eight minutes on Monday. Floyd was handcuffed as Officer Derek Chauvin pushed his face into the pavement amid his pleas for help.

To be able to use my platform to bring attention to a problem that has been going on to long feels good!!! We have to stand up for what we believe in and I believe that it is time that we are heard! #justiceforgeorgefloyd #saynotoracism pic.twitter.com/TRB1AGm0Qx

Werder Bremen revived their hopes of avoiding relegation with a 1-0 win over slumping Schalke. Werder midfielder Leonardo Bittencourt hit a curling long-range shot into the top corner for the only goal of the game, though Schalke complained of a foul in the buildup.

Werder stayed 17th and in the relegation places but moved within three points of safety. The team has only spent one season outside the top tier since the Bundesliga was founded in 1963. Schalke dropped to 10th and haven't won a league game since January.

Robert Lewandowski scored twice as Bayern Munich took a confident step closer to an eighth straight German title with a 5-0 demolition of Fortuna Düsseldorf in an empty stadium on Saturday.

With five games remaining, Bayern moved into a 10-point lead over Borussia Dortmund, which play at Paderborn on Sunday.

Only Bayern's players and staff were there to cheer the kind of dominant win which would normally put Bayern fans in a party mood. Bayern have won 14 of their last 15 league games as they cruise toward the title, including a potential title-deciding 1-0 win over Dortmund on Tuesday.

Right-back Benjamin Pavard got Bayern going Saturday with a 15th-minute shot deflected in off Fortuna's Matthias “Zanka” Jorgensen, who was credited with the own-goal. Pavard got his name on the scoresheet 14 minutes later at a corner.

Lewandowski finished off well-worked team moves either side of halftime to add Bayern's third and fourth goals. That took the Poland striker to four goals since the Bundesliga restarted amid the coronavirus pandemic earlier this month.

Left-back Alphonso Davies added a fifth goal in the 52nd with a moment of individual skill. The Canadian international won the ball from Fortuna's Kevin Stöger on the edge of the box and powered past two more opponents before scoring.

Hertha beat Augsburg 2-0 to make it 10 points from four games since the Bundesliga resumed in empty stadiums this month. That run has lifted the Berlin club out of the relegation battle and within four points of the Europa League places.

Wolfsburg stayed sixth, in a Europa League spot, despite a 2-1 loss to Eintracht Frankfurt and are now level on points with seventh-place Hoffenheim, which beat Mainz 1-0.

Trump tweets Minneapolis is being burnt by outsiders mainly

Bayern chairman Rummenigge grateful Bundesliga can be decided on pitch