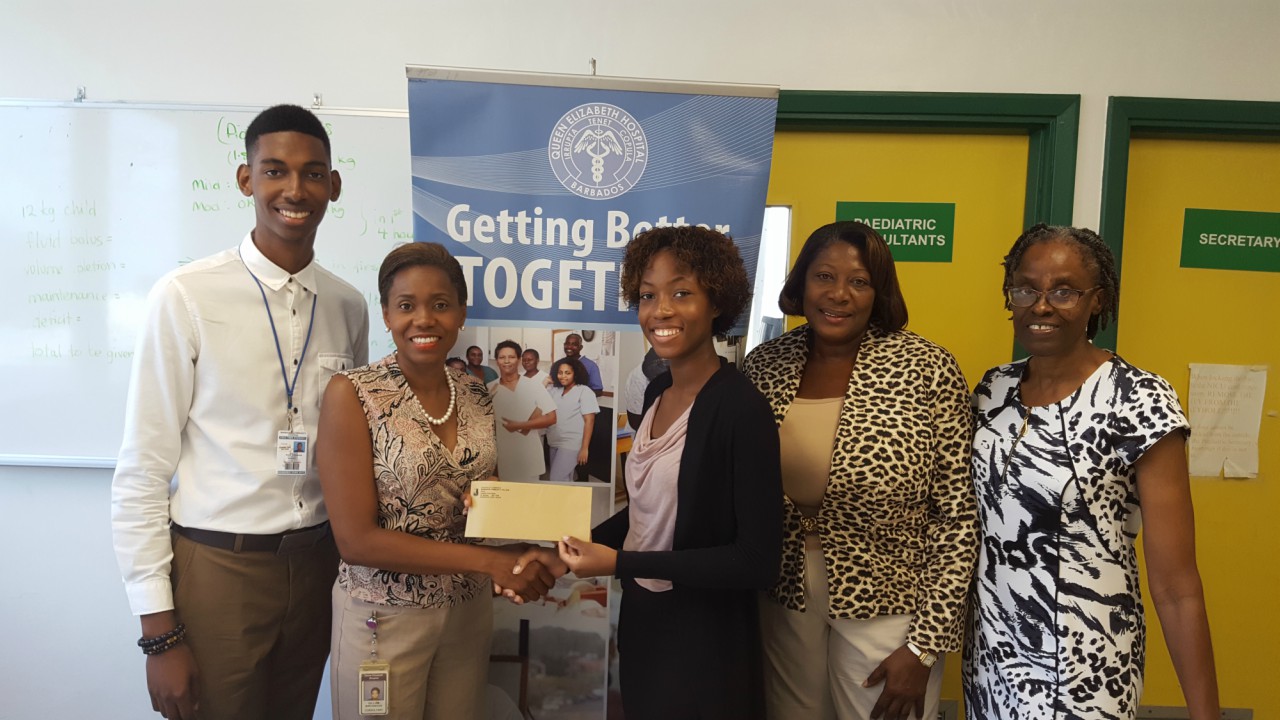 Students of the Barbados Community College (BCC) donated $1,500 to the Neonatal Ward of the Queen Elizabeth Hospital (QEH).

The Business Studies students partnered with Students Guild to raise funds for the ‘Cupcakes for Cupcakes’ project, which entailed series of bake sales and a carwash at the Massy Stores Warrens on April 7,, 2018.

Speaking at the official handing over of the cheque on Wednesday Project Leader Zharia Springer said,

“I am happy that we did this project because it allows us the opportunity to give back to the community and the future of the country. We are very pleased with our contribution especially after we saw a lot of the children in the unit and how the money can contribute to their health and well-being.”

Springer said, pulling together the project was hectic but it was also a learning experience for her and the three other members of the group.

President of the Students’ Guild, Kobie Broomes said that the Guild was happy to be on board. “Immediately after I saw the cupcakes being sold, I spoke to the council and we immediately approved funding to match their fundraising efforts. The Guild is committed to its community outreach initiatives as we celebrate the college’s 50th Anniversary and sensitise our students about the work of the hospital and especially the ward.” Broomes stated.

Related article :Clara Lionel Foundation continues to give back

The Principal of BCC Dr. Cheryl Weekes remarked that she was very proud to be associated with this venture.

“The QEH is one of our major stakeholders in the training of the students of the Division of Health Sciences. The QEH provides internships and practical experiences for a wide range of Allied Health students including Nursing, Clinical Laboratory Science, Pharmacy, Rehabilitation Therapy Technology, and Health Information Management.

During this 50th anniversary of the BCC, we are happy to give back to the community and this is one of the many student led initiatives which the administration has supported, as we continue to make our mark in the community."

Consultant Neonatal Ward Dr Birchwood accepted the cheque on the behalf of the hospital.  “We are very appreciative of all the initiatives that are undertaken, many people aren’t aware of the neonatal ward and all the babies that come through here. Intensive care is not cheap and any donations are appreciated.” She said.

UWI Principal wants to give away more scholarships with RBC