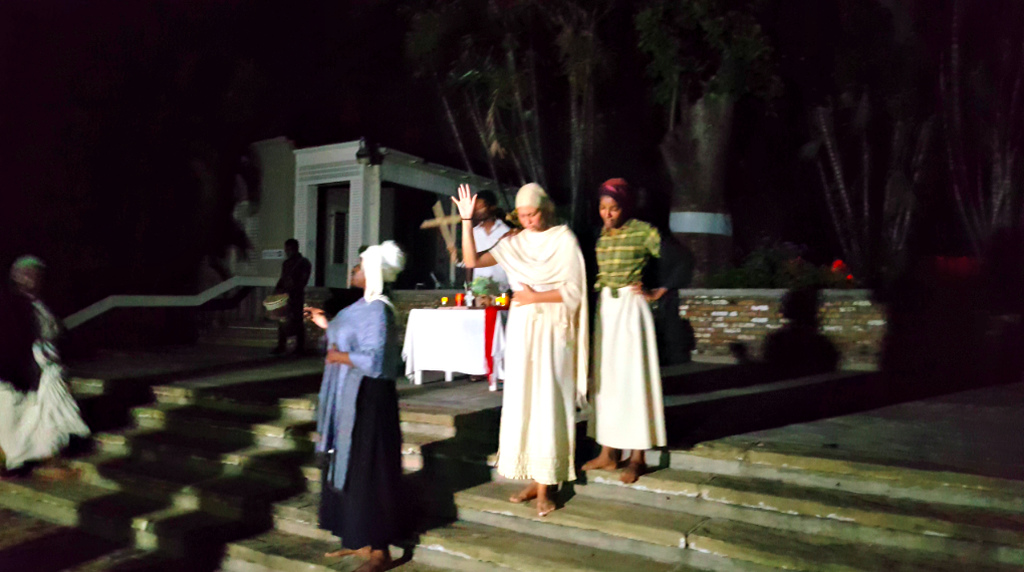 Scene from the Torchlight Experience: Millie Gone to Brazil

The Barbados Museum and Historical Society hosted Torchlight Experience: Millie Gone to Brazil and it was a hit.

Such a success, organisers are already looking ahead to next set of dramatizations and tours as eagerly as many of the patrons.

Chatting with Loop News after the last of three tours on Friday night, October 27, 2017, Senior Tour Guide of the Museum, Klebere Perry said that they saw about 200 persons pass through the gates to enjoy the short plays.

On showcase were three dramatizations by the Barbados Community College (BCC) Theatre Arts first-year students, accompanied by two graduates of the programme. The dramatizations were of The Bettor’s Death, Jacko and ‘e Blue Jacket and Millie Gone to Brazil.

The tours was held at 7:00 pm, 8:00 pm, and 9:00 pm on the grounds of the Museum. Ticketholders walked with their torchlights, lamps, cellphones or rented torchlights and followed the guide through the souvenir shop and out into the African Exhibit, after being fed a course of Aesop fables and Anansi stories.

For many it was a lot of ‘oohs’ and ‘aahs’ as they looked at exhibit after exhibit as very few have been to the Museum lately. But amongst the regular displays their some actors springing out to literally grasp the attention of patrons. This led to a few screams and some shuffling but soon silence fell as people heard wailing sounds approaching. It was then that the BCC students took centre stage.

As Perry, the tour guide rushed with her lamp to follow the party of mourners who were singing funeral hymns and sobbing, the patrons quickly ran to catch up and see what all the tears and commotion was about.

In the foyer of sorts is where the stories really unfolded.

“He kill my sister!”

“Do you all want to know what happened to Millie?”

“Yes elder! Tell us.” Even members of the audience yelled, “Yes” too.

Within the throng of persons were Millie’s sister, the brother of Bailey – Millie’s boyfriend, and many neighbours who had to give of their two cents whether welcomed or not.

Patrons heard tales of how Millie “nuses” to beat Bailey. How Millie “nuses” to brew  special cup of tea for Bailey. How Bailey put Millie in a well to stop her from leaving him and running off to Brazil. The cast members and the Storyteller, who was played by one of the graduates, wove tangled webs of lies, truths and gossip. The other graduate played the elder, and he asked more questions and told more riddles than he answered questions and brought light to any of the situations.

Now while they went back and forth about Millie, there was a loud scream as Jacko went missing from the village and his blue jacket turned up full of blood. They searched high and low walking between audience members whispering and asking “Have you seen Jacko?” “You see Jacko?” Then they told the story of how Jacko’s blue jacket used to mysteriously appear in the lake and then disappear when they tried to fish it out until the lake was drained. And still there was no blue jacket in sight.

'Millie Gone to Brazil' by BCC students at the Museum

Then the story went to four rum bibbers in the neighbourhood and they talked about duppies. Well Cleopholus insisted that he isn’t frightened for the dead and he accepted the bet to go in the vault and come back out. He went and that was the list time they say drunken Cleo alive as the duppies attacked him and he drove his blade through his own shirttail and killed himself tragically.

‘But what happened to Millie?’, you ask…

Well, as the Elder said, Millie is dead and gone, and Bailey locked up and only the two of them are probably the only ones who know the real story. So as everyone looked at the elder perplexed it was decided “Stop with the foolishness and fight so that we could bring this thing to the end.”

Singing hymns like the ‘In the Sweet by and by’ and ‘It is well’, the cast and tech crew took their bows to loud rounds of applause and cheers. They got the loudest response after the 9:00 pm tour, which ended around 10:30 pm.

Perry told Loop that the approximately 200 patrons was “wonderful” as it was more than they anticipated. She said the tours were “a great success” and she is looking forward to the next set on November 29 with fresh tales to be told.

Story time at The Gap Theatre