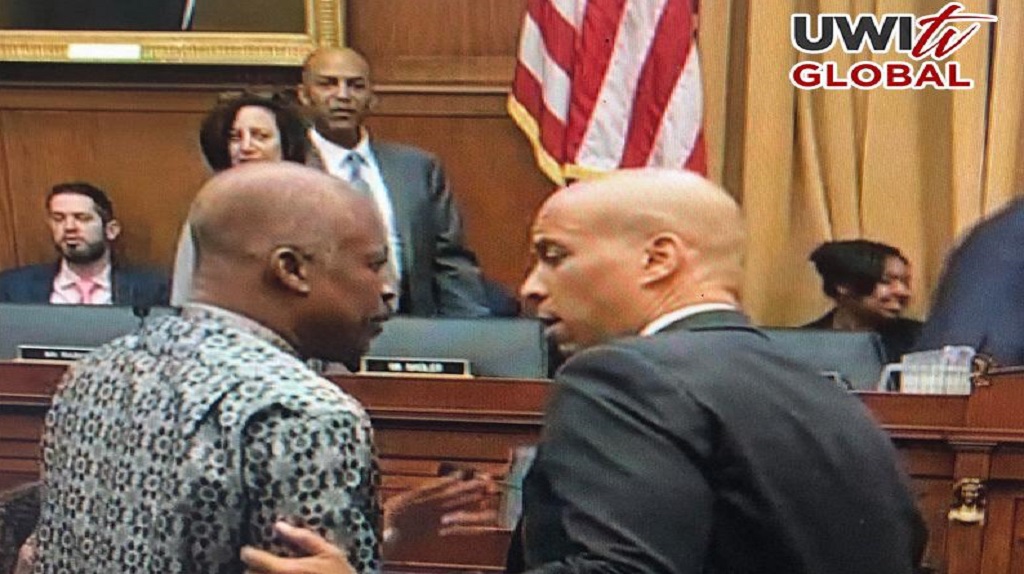 Sir Hilary Beckles (left) Vice Chancellor of the University of the West Indies and Chairman of the Caribbean Reparations Commission and Senator Corey Booker, in conversation at the Slavery Reparations Hearing before the House Judiciary Committee of the US Congress.

Vice Chancellor of The University of the West Indies (UWI) Sir Hilary Beckles on Wednesday, attended a historic hearing on slavery reparations at the US Congress in Washington.

Beckles was invited to appear before House Judiciary Subcommittee on the Constitution, Civil Rights and Civil Liberties by US Congresswoman, Democratic Representative of Texas, Sheila Jackson Lee.

Beckles’ has been a long-standing ally of former Congressman John Conyers, who, for over 40 years struggled to get a Reparations Bill through the Congress.

Beckles later joined actor Danny Glover a public forum, where he placed the Congressional event within a global perspective.

The UWI chancellor and Conyers, on several occasions, addressed the Congressional Black Caucus in an effort to build support in the Congress, according to The University of the West Indies (UWI).

“Their long history of lobbying has now matured with this hearing,” UWI said in a statement.

For his part, Beckles said his appearances was a special tribute to the leadership of Conyers, as well as CARICOM, and Prime Minister of S  Vincent and the Grenadines, Dr Ralph Gonsalves in particular, who five years ago established the path-breaking Regional Commission on Reparations that has inspired the political movement in the USA.

With Reparations taking centre stage in the current presidential debates, there is great anticipation that CARICOM and Congress will work more closely in advancing the cause that has eluded people of African descent for over a century, Beckles said.

Beckles’ participation in the Congress follows his contribution at the British House of Commons in 2014, and his delivery of the keynote address at the sitting of the United Nations General Assembly to Launch the International Decade (2015 to 2025) for People of African Descent.