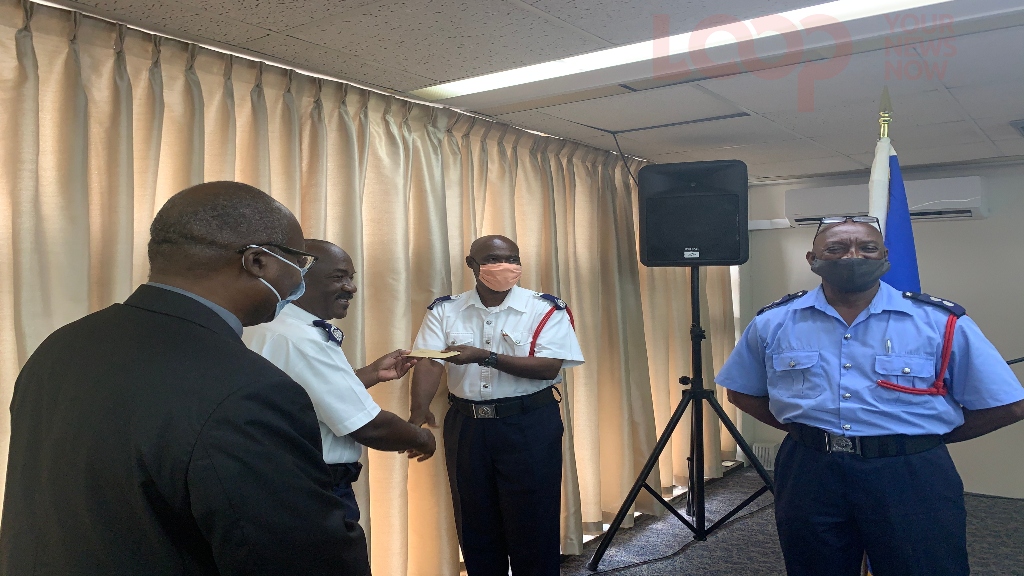 The days of acting has ended for 22 officers of the Barbados Fire Service (BFS).

Today (October 12) the cohort of officers were appointed in the positions of divisional officer, station officer, sub-officer, and leading fire officer under the new Public Service (Appointments) Act 2020.

At their induction ceremony, held at the BFS Headquarters, Chief Fire Officer Errol Maynard awarded 20 of these officers with their appointment letters.

During the ceremony, Maynard spoke briefly with the newly appointed officers.

“You do not need a title to be a leader. You received the title because you are a leader,” he continued.

He reminded them of their duties to lead others to strive for greatness and that being appointed is not the gateway to rule over others.

“You need to be firm and fair in your decision making”.

Maynard later disclosed that two officers were not present at the ceremony and approximately eight to ten officers did not receive their letters of appointment due to them not being in service from October 1. He also stated that there are 23 officers who are in training who will be "passed out" the first week of December this year. This will mean that there will be 227 officers in total however, Maynard stated that the comfortable amount is 240.

"There are officers who were acting much longer than that but because of their development and because of persons retiring they were asked to act at a higher level and therefore they did not qualify under this Act, but provisions are being made that they will receive their due reward...

“It seems as though they are being punished for being progressive, developmental and aspiring for greater heights. . .

“I don’t believe that it was in any way meant to omit these dedicated and committed officers.”

The Chief said that in the case of the batch who remain without appointment, he will be working on the behalf of these officers in finding a resolution to this matter.

Last week when appointment letters started rolling out for 200 persons in the Public Service, those who found any grievances with the process or the selection were advices to follow the necessary steps and submit the forms to have the decisions looked into properly.