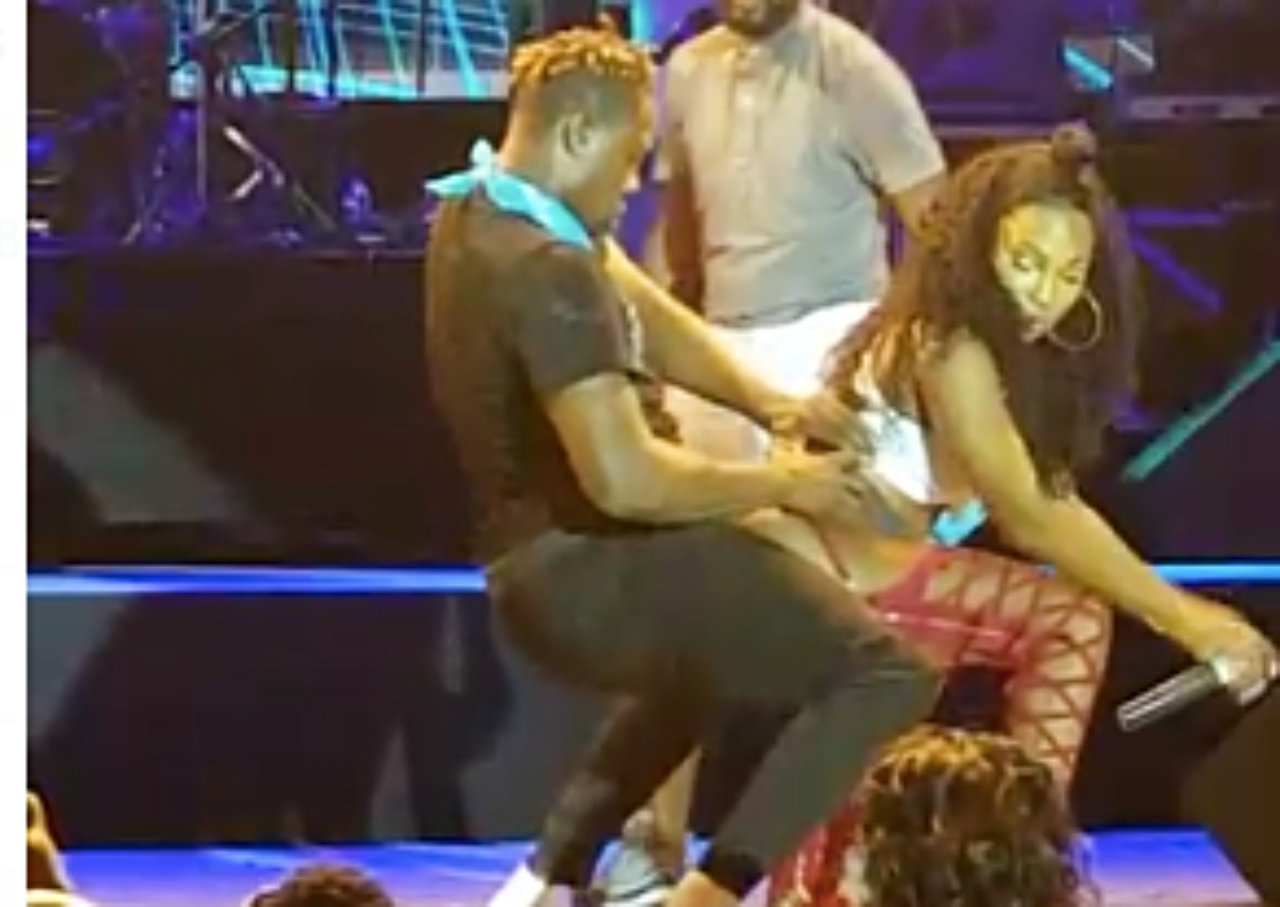 Patrice Roberts may sing about a Criminal Wine and call herself a big girl now, but she did not bargain for, nor expect the Bajan wine she got on this Crop Over trip.

It left her running and laughing.

At Soca on the Hill, Patrice made that age-old mistake of inviting men on stage for a dance and when Darrell Straughn, known to many as ‘Army man’ hit the stage and took hold of her waist, in less 30 seconds, 17 to be exact, she was in shambles and the thousands at Farley Hill were in an uproar.

According to some people commenting on Patrice’s Instagram post of the 24-second long video, his waistline ticked and tocked like the hands of the clock but both forwards and backwards. ‘That boy waistline a tick pon timing’ said one lady in Patrice’s comments.

Loop caught up with both Army man and Patrice today, hours after their performance, and they were both still laughing at the comments that the video was receiving.

Very much about living a life of fun, when asked what were his thoughts when Patrice quickly moved away after the wine started, Army man chuckled and said, “Oh I was like, wuh I now start and she gone… I was like I now getting ready to just mash up dis place and she move.”

Patrice on the flipside said, “I was looking for a memorable wine and I got just that.”

But she didn’t really see his skill until afterwards when given the video. “Of course I could not see everything that was going on behind me but looking over the footage gave me a good laugh. I am impressed all over again.”

And she was not alone. Some of the most standout comments on her post were – ‘That is possibly the most skilful wine I have ever seen in my life!’, ‘Dat man was planning that wine years now lol’, ‘Send me his number na…’, Patty yuh always backing out when tings get too real’, and when someone added, ‘That is how twins are made’, even Army man had to respond.

The two of them were probably typing ‘ha ha’ and ‘lol’ all day long.

One comment especially that jumped out at Patrice though was, ‘bring him back home when you coming back please’. Asked which comment was the highlight for her, she said, “Some of the comments have been funny. It seems to be good for tourism. People have been asking me to bring him home with me or [they] now seem to be very well interested in the Bajan’s man waistline.”

With a real love for calypso and soca, believing it to be the best music in the world, Loop wanted to find out which track was Army man’s favourite this year. Surprisingly, he didn’t have a favourite but the first off the tip of his tongue was the line, “I waan put piece uh wuk pun ya’ from Marzville’s Bashment soca track for 2018, Roughness. That was the first song that came to his mind, but he listed others and stressed that he does not cry down anybody, once he can pelt his waist to the tune, he’s good.

He even revealed that he’d like to be on stage, even more, this time next year for Crop Over 2019 God-willing.

“I even was looking to bring out a song next year. I don’t know if I gonna do much singing though ‘cause I like to wuk up and get on bad, but I would like to bring out a good song next. It doesn’t have to be in a competition. Just get lil stage show, get a song and just wuk up and party hard,” he explained.

Laughing still at the many people watching and re-watching the videos on both their Instagram channels, Patrice just encouraged her fanbase in Barbados to continue to support the artistes that are representing the Caribbean and she called on them "to indulge safely and be respectful for the remainder of Crop Over 2018", and of course, she added, “I love Barbados”.

Lyrikal, who sings the Carnival 2018 track - Criminal Wine, with Patrice, popped in under her video today too and he added his two cents saying, “Gotta learn this move ASAP!!! #PracticingNow”. But he too met his Bajan match in Barbados’ very own Mara Rose earlier in this Crop Over 2018 season.