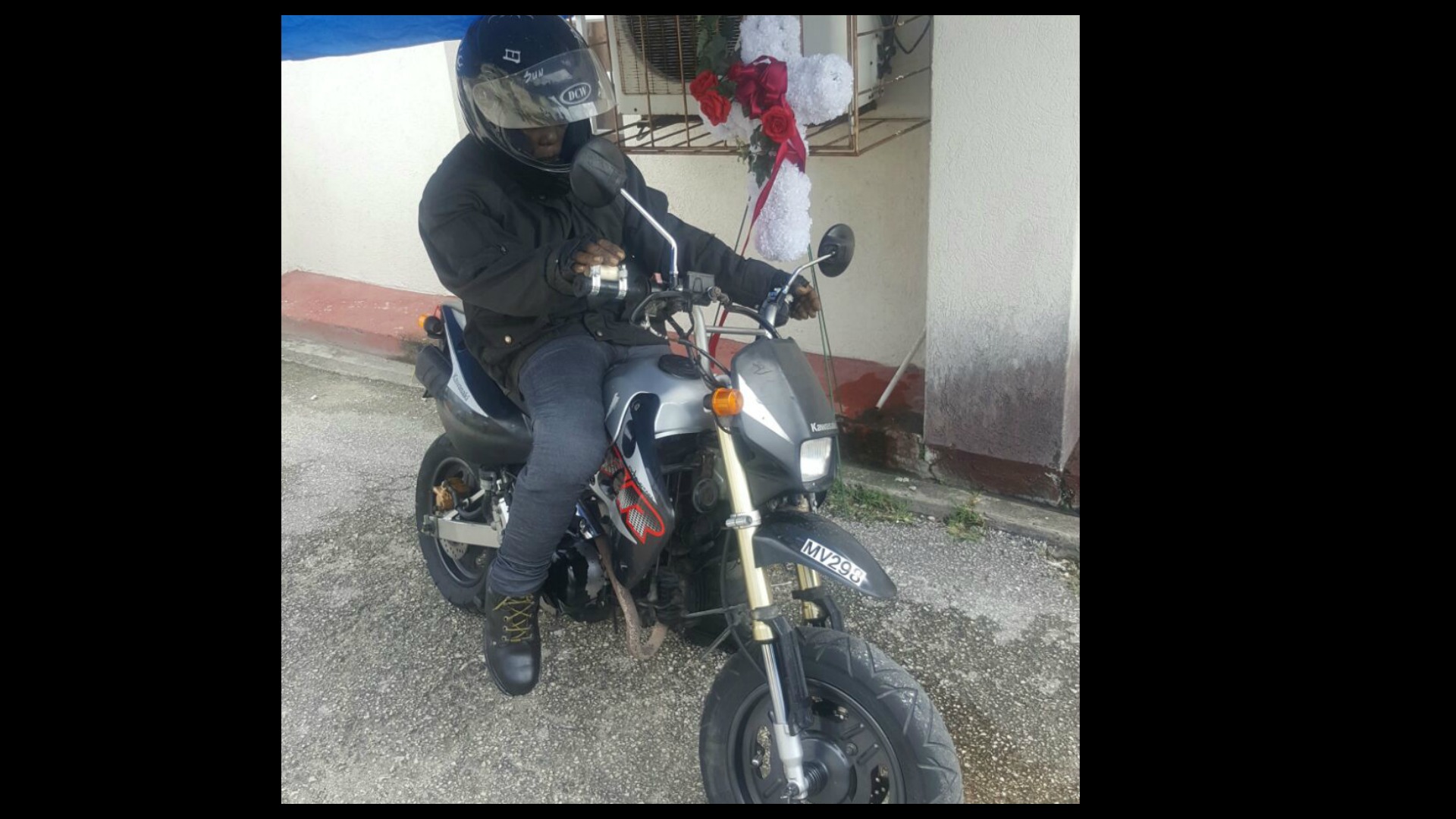 Toni Barrow loved her motorcycle and she got a most fitting send off.

At the viewing held at Brian Bentham’s Funeral Services in Bush Hall, St. Michael, yesterday, bikers, family and friends were wowed to see Barrow’s body up erect on her motorcycle.

“Once Toni was on that motorcycle she was all bubbly and everything.”

Having met her three or four years ago when he went in for his motorcycle licence, he reminisced,

“I saw her with this cute, little motorcycle and I was like, ‘Wait, where you get this from?’” And the rest is history as they say.

Tafari recalled that Barrow was always excited to see the big bikes, always, and even though he encouraged her to come and ride with them or even join in for the Independence ride every year, she’d always say, “Man nah! I too slow and my bike too small. I’d say, ‘Toni you just need to do at least 40mph, that is all. Your bike can do 40 right?’ She said, ‘Yea, how yuh mean? Easy!’ I’d say, ‘Okay ‘cause de fellas don’t be riding fast and reckless in the Independence ride, but she always believed she was too small to hang with the big guys.”

Reflecting on the last time he saw Barrow alive, he said that it was less than a week before she died, “three or four days before, I saw her at the gas station in Wildey and she ran and hugged me from behind.”

Tafari said that people say she loved her bike and it was the truth. “She always to tell me two things she used to look forward to in the day - one, when she done shower and had her breakfast and stuff like that, she used to look forward to getting on her motorcycle and riding to work, and then she used to be excited for the evening, she couldn’t wait for the evening to come so she could get on her bike and ride back home. Those are the things I remember about Toni. She was always bubbly and cheerful. Once she was on that bike she was happy.”

Therefore at the viewing he said he was most pleasantly surprised.

“When I saw her on the bike at the funeral home I was like, yeaaaa, that’s what I talking ‘bout!”

Overall, Tafari said, “she was my girl. She was irie.”

Barrow was also on the bike at the funeral service, which occurred at Bethel Life Assembly on Hindsbury Road this morning at 10:00 am. She was cremated.

The late 43-year-old mother resided at Spooner’s Hill, St. Michael. She died on the scene of her crash along Barbarees Hill Road, St. Micheal on May Day.

Motorcyclist dies in May Day crash