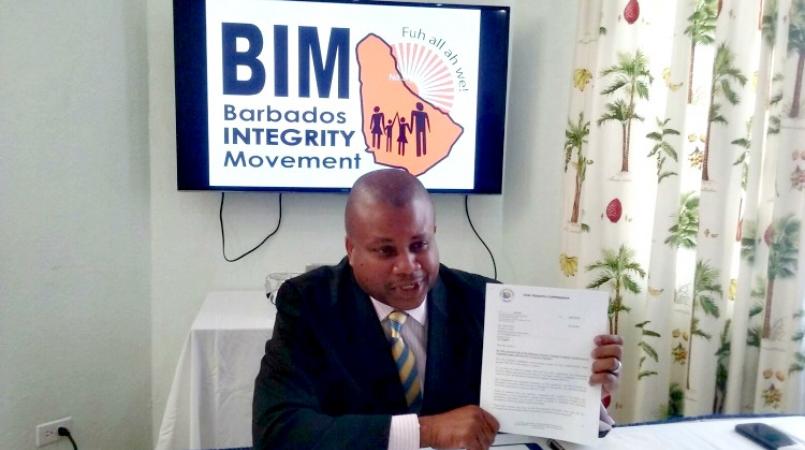 Head of the Barbados Integrity Movement (BIM) is calling on Opposition Leader Mia Mottley, to meet him to debate issues and look at how the country can move forward.

Neil Holder said he wants Mottley to join him in a national debate, so as to give the people of Barbados the opportunity to hear their visions for Barbados:

“Let us debate on how we propose to make this country great again."

In his Errol Barrow Day message yesterday, he commented on a seaworthy Barbados which he notes was the refuge for the Caribbean, a country that which boasted to be the best for social services, education, the sugar

industry, cotton, rum and spirits, amongst many other industries.

Holder however noted that Barbados is now “dry docked by the likes of selfishness, corruption, squander-mania, nepotism, insularity, crime, violence, lack of concern for fellowman, greed, racial and political

"Our greatest challenge of recent has been that of finding positive leadership! We have lost our way when our very leaders and those reposed with the responsibility of taking charge of our great nation are found to be feathering their own nest at the pain and suffering of the masses."

He questions how to exercise good conscience when Barbados is rife with allegations of vote buying and bribery? Disrespect for high office he further stated, is demonstrated when a singular individual can defy the laws of the country by erecting an illegal structure and yet though served notice by the authorities, continue in good stead having made public utterance that they will push the laws to the fullest extent."

Holder stressed that The Rt. Excellent Errol Walton Barrow never envisaged that “we would one day sell our National Bank, it was never envisaged that Barbados would one day become a state of Trinidad and Tobago by virtue of their acquisition of our prime conglomerates and lands and on the other hand the lack of testicular fortitude on the part of our local businesses and credit unions for not stepping forward to invest in our prime assets and crown jewels!”

The leader of BIM further stated that The Rt. Excellent Errol Walton Barrow would have never conceded that Barbados would have an Edutech Program spending over $50 Million USD with little trace or evidence of the spending and value after such an undertaking.

Holder said that it was "with utmost selflessness, patriotism, vision and pride for country the Rt. Excellent Errol Walton Barrow – National Hero and father of Independence sought to release Barbados from the colonial rule under the British Empire on November 30th, 1966," while lamenting that this is no longer the aim of many who have taken up political office.

WATCH: Heated discussion on the youth shows up political divide