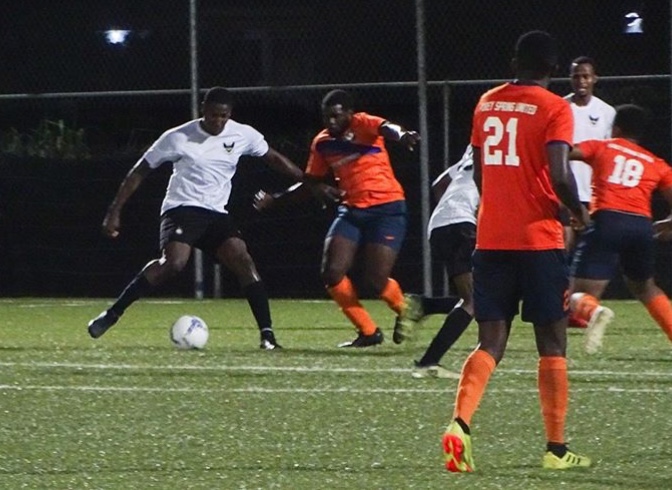 The Blackbirds soared to their second consecutive victory with a comfortable 4-1 victory over Porey Spring FC.

Former national captain Mario Harte got his first goals of the competition, registering a brace on the evening, with goals in the 18th and 57th minute.

The ever consistent Niall Reid-Stephens scored his fourth goal of the competition in the 24th minute. Rommel Bynoe completed the Blackbirds’ scorecard in the 31st minute.

Damion Thorington managed a consolation goal for Porey Spring in the 50th minute.

Earlier in the evening, Crane & Equipment Ellerton held off a late attack from Claytons Kola Tonic Notre Dame to emerge 4-3 victors and table leaders of Group D with six points.

Ellerton raced to an early 3-0 lead and as a result, became arrogant and complacent.

Shaquan Clarke netted two of his three goals in the first half (18th & 26th) and national U17 skipper Roshon Gitten made it 3-0 in the 28th minute.

Dishon Howell’s spectacular strike from distance in the 42nd minute ignited a possible comeback, as Kyle Gibson brought the Bayland boys within one goal when he headed in Dames’ second goal in the 56th minute.

Clarke scored his third and Ellerton’s fourth from the penalty spot in the 59th minute after Notre Dame defender Chavez Lloyd was adjudged to have handled the ball inside the area by referee Ryon Small.

Gibson scored again in the 64th minute but Ellerton held on for their second successive victory.

In Group B action Tuesday night, Wotton defeated Fitts Village 8-1, while Paradise FC remained in the top spot with a 4-3 victory over Youth Milan.