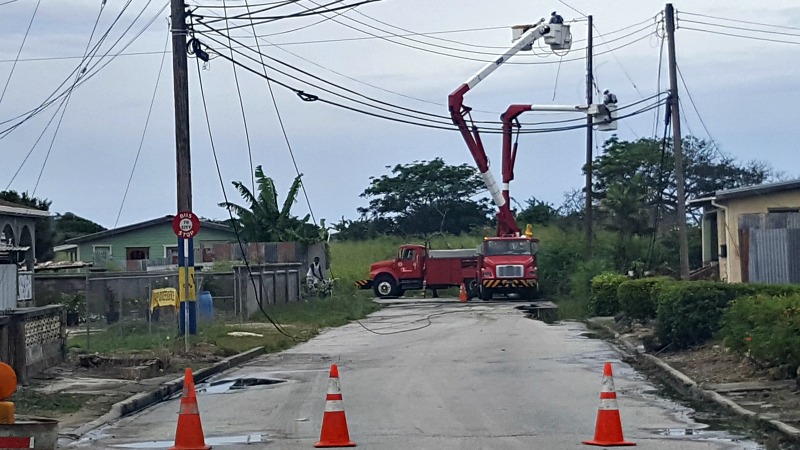 Barbados Light & Power Company trying to stay on top of the job.

Barbados Light & Power (BL&P) Company is not resting on its laurels after last week's debacle.

Since last week’s outages, BL&P has had support from The Bahamas and Korea and as a result is again operating with excess capacity. In fact, while the island’s peak demand stands at approximately 145 megawatts, the company’s current generating capacity is back up to 247 megawatts.

And the heads of BL&P have met once more with Prime Minister Mia Mottley and made some promises to improve generating capacity and prevent another island-wide power outage which shuts down the entire island.

In a statement from the Prime Minister's Office today, Tuesday, November 26, it was stated that the Barbados Light & Power Company yesterday agreed to urgently add another 15 kilowatts of generating capacity to its electricity grid, part of the process of guaranteeing its capacity after two consecutive days of power outages last week.

Following that meeting in today's latest update, it was confirmed this evening when the top brass of BL&P met with Barbados' leader, some members of her Cabinet at Parliament, officials of the Barbados Water Authority (BWA), Barbados National Oil Company (BNOC), the Fair Trading Commission and advisors.

It was reported that BL&P has "committed to completing all matters related to the procurement of this additional generating equipment over the next 48 hours, and to having the generators in the island by Christmas.

"This will be in addition to the temporary 12-megawatt  generating plant which is already on a ship headed to Barbados from Panama. That rented plant arrives on December 5 and BL&P personnel have already begun the preparation to ensure it is installed and commissioned by December 15."

In the interim, the power company also committed to putting plans in place from as early as tomorrow. "It is immediately proceeding with the procurement of 33 megawatts of power generation equipment to boost its permanent plant. While these four new generators costing more than $100 million will arrive equipped to burn heavy fuel, they have the capacity to be retrofitted to burn natural gas."

According to Prime Minister Mottley, BL&P has committed to doing this retrofitting early in the life of this equipment to ensure it conforms to the national policy of a 100 per cent carbon-neutral  power generation environment by 2030.

“These acquisitions by BL&P will go a long way toward the immediate and long-term stabilising of the island’s electricity generating capacity and rebuilding the confidence of Barbadians in the company at this very critical time,” the Prime Minister said.