Police say the shooting occurred sometime after 3:00 p.m. and resulted in a 41-year-old woman and man in his late thirties receiving gunshot injuries.

Preliminary police investigations are suggesting, that the assailant saw the man, who is known to him, in the area of the Fairchild Street Market and opened fire.

As a result, the woman, who was sitting by one of the stalls, was shot in her right thigh, while the male received two gunshot injuries - one to his foot and one to his back.

The woman was transported to the QEH by ambulance for medical treatment, while the man took himself to the QEH in a private vehicle.

Police are asking anyone who can provide any information to assist with this investigation is asked to contact the CID Headquarters at 4307189, or 4307190. Police Emergency at telephone number “ 211”, Crime Stoppers at 1-800 –TIPS (8477), or the nearest police station.

This latest shooting comes just four days after a group of gunmen opened fire on 20-year-old Tareid Rock on Spring Garden Highway at the end of Grand Kadooment, killing him and injuring at least 18 bystanders.

Persons in Bridgetown on River Road scampered as shots rang out in the area of the Fairchild Street Market sometime after 4 p.m. 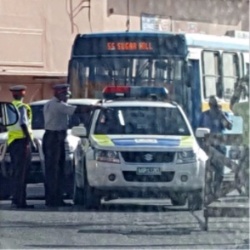 Police confirmed the shooting incident and are on the scene in The City.

According to reports, bystanders said two persons were hit by the bullets and one fled the scene in the direction of the Queen Elizabeth Hospital.

Shots were reportedly fired into the stalls in the Fairchild Street Market directly across the street from the Barbados Workers’ Union (BWU) Co-operative Credit Union at the corner of Fairchild and Nelson Streets.