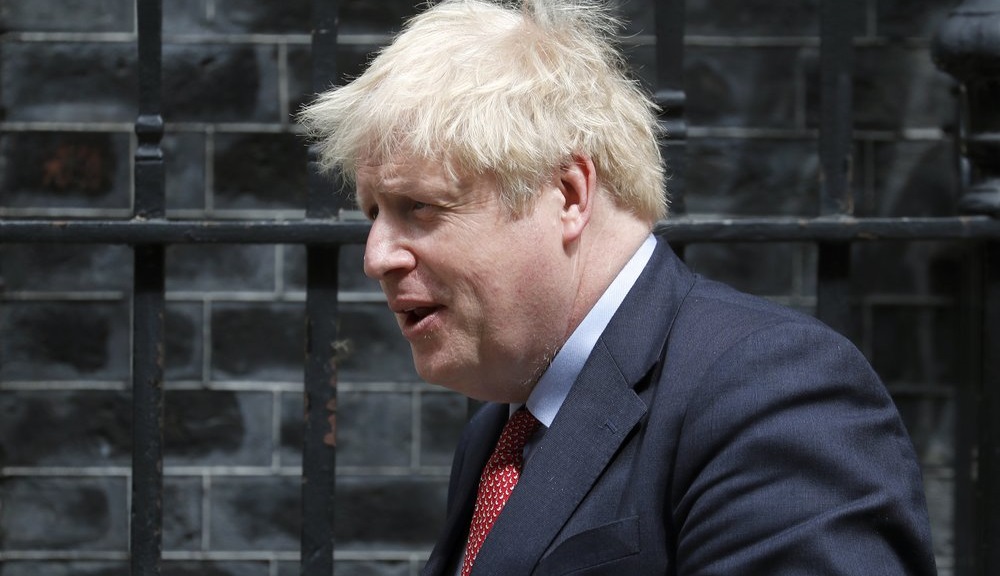 Johnson announced a raft of measures aimed at easing COVID-19 restrictions on Friday, including trials on larger gatherings in places like sports stadiums as the country emerges from a lockdown imposed on March 23.

Johnson is trying to walk a tightrope, persuading Britons that the country is ready for new outbreaks while also encouraging a return to shops, restaurants and workplaces to kick-start a moribund economy that has shrunk by a quarter since March.

He also offered employers "more discretion'' in bringing their employees back to work.

Follow all of AP's pandemic coverage at http://apnews.com/VirusOutbreak and https://apnews.com/UnderstandingtheOutbreak

BARCELONA, Spain — Health authorities are asking Barcelona's 5.5 million residents to keep their socialization to a minimum and to stay at home as much as possible.

The measures announced Friday mix mandatory orders like banning social gatherings of more than 10 people and closing nightclubs and gyms, as well as a public call for voluntary compliance with restrictions on mobility, including refraining from traveling to second homes outside of the regional capital.

Nearly 1,300 more people were confirmed or suspected of carrying the virus in Catalonia on Thursday, the highest daily increase in weeks.

The regional government's spokeswoman, Meritxell Budó, has said that stricter measures such as a full lockdown would only be avoided by reducing social activity and venturing out for essential activities such as work.

Mandatory use of masks, even when outdoors, is rapidly spreading across Spain as officials grapple with more than 150 active outbreaks.

PARIS — French authorities are imposing mask requirements and testing in two western regions where virus infections are picking up, amid fears that summer holidays will bring a new wave of illness.

Masks will be required in all indoor public places in France starting next week, but the Finistere region of Brittany and Mayenne region near the Loire Valley are doing so already in select cities and towns, outdoor markets and islands that attract summer tourists.

In Mayenne, several clusters have appeared over the past several days.

The virus reproduction rate in Finistere climbed from below 1 in recent weeks to 2.5, meaning one person with the virus infects 2.5 others. But the regional health agency noted Thursday that rising case numbers are also linked to a 50% increase in testing in the area over the last week, and noted that there are only three people in intensive care with the virus in the region.

France has reported 30,138 deaths related to the virus.

BERLIN — The United Nations is increasing to $10.3 billion its appeal for humanitarian aid funding to handle the fallout from the coronavirus crisis around the world.

Jens Laerke, a spokesman for the UN Office for the Coordination of Humanitarian Affairs, said in Geneva on Friday that "the number of people in the world who need humanitarian assistance has more than doubled because of the COVID-19 pandemic and the effects of the global lockdown of economies and societies."

At the beginning of the year, humanitarian agencies targeted around 110 million people, he said. They now need to reach 250 million in 63 countries.

Laerke said the UN initially asked for $2 billlion in late March for the immediate response. That was increased to $6.7 billion in May.

He said the appeal does cover basic health services but the bulk of it is related to non-health needs, such as food, water, sanitation and shelter. He added that "we are seeing a huge increase in the number of starving people, which could reach some 270 million by the end of the year."

JOHANNESBURG — South African President Cyril Ramaphosa is praising the family of the daughter of anti-apartheid leader Nelson Mandela for disclosing that Zindzi Mandela had tested positive for the coronavirus before she died Monday.

"This is a virus that affects us all, and there should never be any stigma around people who become infected," the president said in a statement. In disclosing her status "you are helping encourage social acceptance for sufferers."

South Africa how has the world's sixth largest confirmed virus caseload with nearly 325,000 infections. Mandela, a South African diplomat, was buried Friday. Her family has said they were still awaiting her autopsy for the official cause of death.

The Friday report said an Emirates Airline flight landed in Tehran's Imam Khomeini international airport. It was the first flight since late February when the airliner stopped its flight after Emirati authorities found two Iranians who were infected with the coronavirus.

Emirates planned to have one flight per day to Tehran-Dubai-Tehran with a Boeing 777 jetliner.

PHNOM PENH, Cambodia — Two US diplomats are among five new cases of coronavirus in Cambodia announced Friday by health officials.

All five cases involve people who had traveled from the United States. Three are Cambodians who arrived Wednesday via Taiwan, said a Health Ministry statement.

The statement described the two Americans as senior diplomats who had flown from the US via South Korea and also arrived Wednesday.

It said the two are being isolated at the US Embassy in Phnom Penh. An embassy spokesman declined to provide immediate comment or details.

Cambodia banned virtually all new arrivals in March but last month eased the rules, allowing the repatriation of more Cambodians and the tightly restricted entry of foreigners.

Cambodia has had 171 confirmed coronavirus cases with no deaths.

BEIJING — Further tightening measures are being imposed on the northwestern Chinese city of Xinjiang following a reported cluster of new coronavirus cases.

Airlines say passengers departing the city's airport are being required to show a negative test for coronavirus and records showing they have a clean bill of health.

The main subway line linking the city to the airport has also been shut and some residential communities closed off and restrictions imposed on use of public transport.

The health department in the surrounding region says five confirmed cases have been reported over the past 24 hours, along with eight cases where people have tested positive but are showing no symptoms.

SEOUL, South Korea — South Korean prosecutors have questioned the leader of a secretive church sect over accusations that they hampered the government's anti-virus response after thousands of COVID-19 infections were detected among its members in February and March.

Lee Man-hee, the 88-year-old chairman of the Shincheonji Church of Jesus, was questioned for about four hours Friday at a district prosecutors' office in Suwon, south of capital Seoul, before being sent home after he complained about unspecified health problems, prosecution and church officials said.

Lee and other Shincheonji leaders have faced suspicions of hiding some of the church's membership and under-reporting its worship activities to health authorities to avoid broader quarantines. Prosecutors last week arrested three senior members of the church over the allegations. Lee and Shincheonji have steadfastly denied the accusation, saying that the church has been properly cooperating with health authorities.

JERUSALEM — Israel has reimposed sweeping restrictions in response to a new surge in coronavirus cases, including weekend closures of many businesses and the limiting of all restaurants to takeout and delivery.

All gyms and exercise studios will be closed except for use by competitive athletes. Restaurants will no longer be allowed to have on-site seating and beaches will be closed on weekends beginning later this month.

Stores, malls, barber shops, beauty salons and tourist sites will also be closed on weekends. Public gatherings will be limited to 10 people indoors or 20 outside.

By late May, Israel had largely contained its outbreak following a two-month lockdown. But cases have soared in the weeks since restrictions were lifted, with Israel reporting around 1,900 new cases on Thursday alone. At least 384 people have died since the outbreak began.

"We have asked people and businesses to raise their alert levels," Tokyo Gov. Yuriko Koike told reporters, urging social distancing, regularly disinfecting of hands and other measures to curb the outbreak.

Virus cases in Tokyo were confirmed at 286 Thursday, setting off worries the economy had reopened too quickly. Tokyo was taken off the area eligible for discounts, set to start next week, under the government "Go To Campaign" to encourage travel and tourism within Japan.

Japan has never had a total lockdown but asked businesses to close and people to work from home in an "emergency," starting in April. That has been gradually lifting.

Japan has so far avoided the massive cases of the hardest hit nations, at fewer than 24,000 confirmed cases and about 1,000 deaths.

BEIJING — China is now requiring those arriving on the mainland from Hong Kong show a negative coronavirus test taken within the previous three days and undergo 14 days of supervised quarantine in order to gain entry, following a new outbreak in the semi-autonomous region.

Notable exceptions include students and truck drivers who must cross the border on a daily basis, along with "important business people" and others recognized under bilateral policies excluding them from quarantine demands, according to the official notice.

The new requirement took effect from 10 am on Friday.

Hong Kong reported 67 new cases of coronavirus infections on Thursday, an all-time daily high. Authorities said 63 were locally transmitted and that they could not trace the source for 35 of them.

MELBOURNE, Australia — Australia's Victoria state has reported a daily record of 428 new COVID-19 cases as authorities move to increase testing in the state to monitor for any spread of the coronavirus from the Melbourne area.

Most of the new cases and three deaths reported Friday were in Melbourne.

Melbourne and neighboring semi-rural Mitchell Shire have been locked down since last week and authorities hope the restrictions will soon bring a plateauing of infections.

Victoria Premier Daniel Andrews says only five of the new cases are in parts of the state not in lockdown. He says the government is increasing the number of testing sites outside Melbourne.

The state health minister adds that all but 42 coronavirus infections detected in Victoria this month were in Melbourne and Mitchell Shire.

SEOUL, South Korea -- South Korean health officials are expressing optimism that the country's COVID-19 outbreak is coming under control despite a spike in infections tied to international arrivals.

Senior Health Ministry official Yoon Tae-ho said at a briefing Friday that the spread of the coronavirus is clearly stabilizing in the densely populated Seoul metropolitan area and other major cities, where transmissions had surged since late May.

Yoon says imported cases are less threatening than local transmissions because South Korea is enforcing two-week quarantines on all people arriving from abroad and having them tested within three days.

Boris Johnson says COVID-19 has been a disaster for Britain