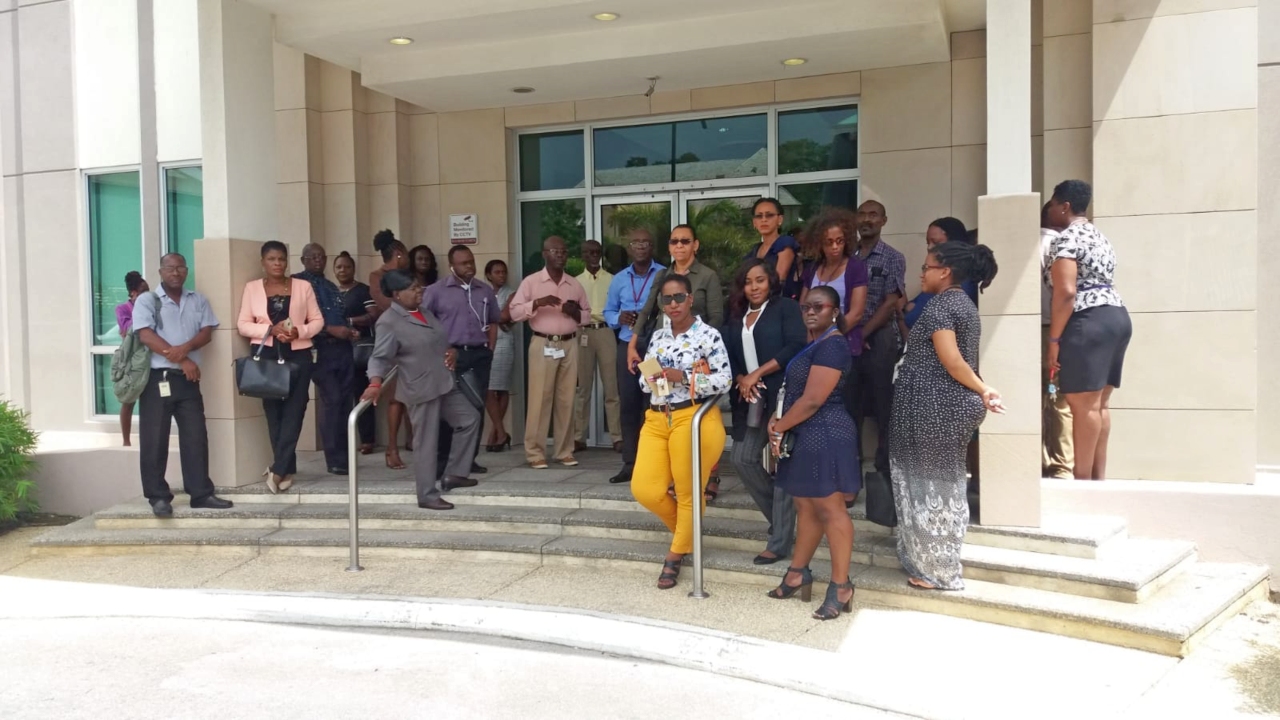 Workers at the Barbados Statistical Service (BSS) outside of their Baobab Tower office.

Workers at the Barbados Statistical Service (BSS) are off the job as a result of environmental issues.

When Loop News visited the establishment which is housed on the fifth floor of the Baobab Tower in Warrens, St Michael, workers were outside of the building and expressed frustration about the reoccurring problem.

They believe that the environmental problems they face is what led to the collapse of a coworker today and had resulted in others racking up medical bills as they continue to have to visit the doctor for problems resulting from being in the office.

Shop steward with the National Union of Public Workers (NUPW) Kimberly Agard, explained that while the issue started when they "first moved into the building in 2012," it has been intensified to the point where workers' health is now at risk:

"It is an environmental issue that we had been battling with for the past two or more years. We had the complaint when we first moved into the building, but the previous building manager somewhat dealt with the issue.

"For the past few months, a year or so, we have been having the issues every day - we have this stifling sewage scent that comes. Before it came twice a day and it would come between 9:30 am and 10:00 am, and 1:30 pm and 2:00 pm every day, but now the occurrences have decreased - they are coming guaranteed every Monday and you have the lingering stench throughout the office during the rest of the week."

She added that workers did not pay enough attention to the matter at first and had even ridiculed a former colleague who complained about feeling ill in the building, before eventually being transferred from that complex:

"At that time it was only her being affected and we in our error we did not take it seriously, but now that it is affecting more persons we recognised that it is definitely something serious."

She described some of the symptoms they have been experiencing:

"It has been causing some staff members some high levels of discomfort - we have runny eyes, we have swollen eyes, respiratory issues, itchy throats and as recent as this morning a staff member collapsed, and I have sought medical attention and I'm now back from the doctor."

Agard added that while they understand that it takes time to resolve such matters, workers can no longer be patient as their health has to be placed at the forefront:

Those inspections include "an air quality test and I know they said they were sealing the windows to try to prevent any cent from outside from coming in".

She also lamented that "it is so strange":

"It only happens on the fifth floor and only on one half of the fifth floor. So the entire floor before was not being affected, however I've heard some of my colleagues on the other side of the office now complaining that the stench is reaching them."

Some other workers wanted to remain anonymous, but spoke to Loop News about the matter:

"This environmental issue is taking a toll on health. People are getting sick, it isn't one or two of us and it is time they take this seriously," one woman said.

"Look at his right eyes," one man said while pointing at another whose right eye was not opening, "it cannot open - that is what is happening here, not only to him but that happened to a lady and me too."

Their plea to have the matter urgently addressed was the sentiment held by their collegues, as persons stressed that the situation was just "too much to bear".

Director at the BSS, Aubrey Browne, told staff that they will be contacting "the Ministry of Housing- which is the landlord of the property - the Environmental Protection Department and the Ministry of Labour to investigate what is causing the problem". He was also joined by Industrial Relations Officer at the NUPW, Christian Rock, who told the BSS employees to follow protocol on the matter:

"Usually in situations like this we would advise the staff to still come in, sign in and if you experience the issue then you will come out... leave".

Caribbean must be environmentally and fiscally resilient - World Bank