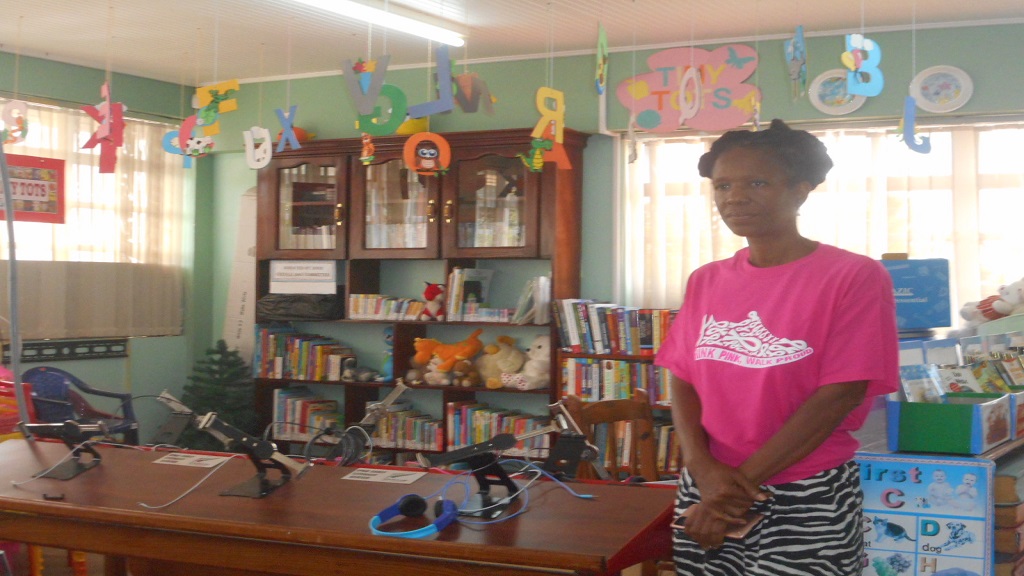 Adria George standing where the stolen iPads were located

Police in St Lucia are investigating a burglary at the Micoud Public Library where a number of items were stolen over the weekend.

The items stolen were 12 iPads, a television set, seven headphones, and laptops.

In an interview with Adria George, librarian of the Micoud Public Library, she told Loop News that the incident appears to be well planned.

“The thieves came with all their tools,” she said.

According to George, she was alerted of the incident by the janitor of the library sometime before 6 am today, Monday, August 17, 2020.

“When I arrived at the library, I realized two of its glass windows were broken but the door was locked. I looked around and noticed our 40-inch Samsung flat-screen television, 12 iPads, laptops, and seven headphones were stolen,” she said.

“What hurts me more was the iPads which were stolen. We got the iPads from the New Zealand Embassy through a grant, which we obtained to conduct a literacy programme. It was a programme we intended to extend.”

She said now that the iPads have been stolen, they don’t know what to do.

“It’s really a set back for us with what we want to do with the kids,” she lamented.

According to George, the library has never been safe, adding that they have informed the relevant authorities of their security concerns.

“We have one entrance which is also the exit, we have no security guards, no security alarm or security cameras,” she said.

George noted the open wifi at the library is another concern for them: “You find all types of characters around the library.”

She said most of the things in the library were obtained through their own effort.

George is now calling on the public to play its role in the investigation of the matter.

“We are appealing to the public not to buy any iPads, television set or laptops from anyone offering to sell it to them. Contact us, the Micoud Police Station or the nearest police station to them,” George said.