Over 15,000 sign petition made by Chase demanding justice for Demarco 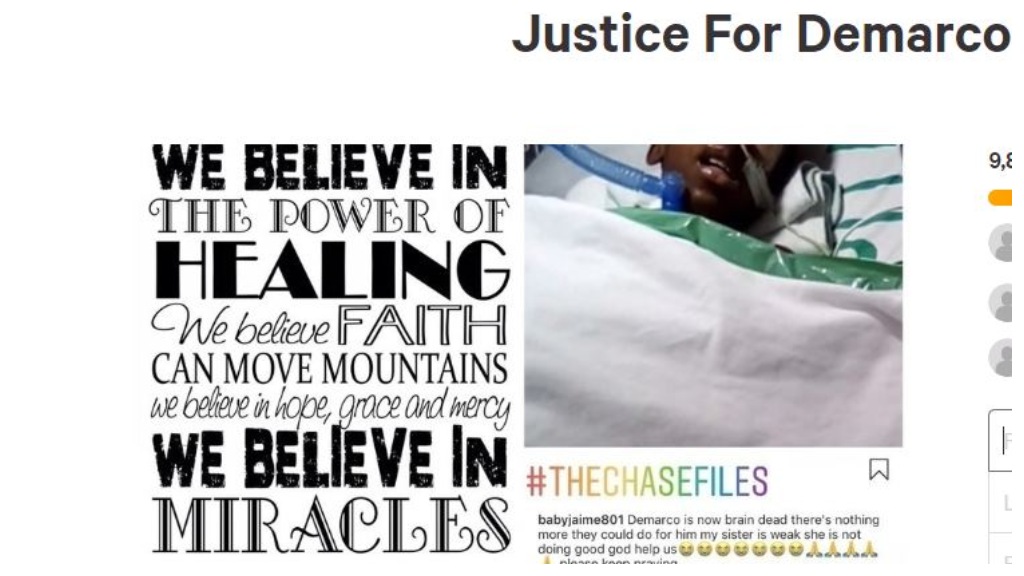 The online petition for Demarco Gibbs

Bajans are demanding justice for Demarco Gibbs and Stephanie Chase is ready to lead the fight against bullying, especially when children are the victims.

Since the story about the ten-year-old boy who was struck in the head with pieces of wood by four of his playmates was made public, social media has been ablaze with posts and comments. Many have taken to online forums to vent, expressing both dismay and anger at the situation.

Yesterday (July 30) a picture of the child lying in a hospital bed with several tubes attached to his lifeless body began making the rounds on social media. An accompanying caption stated:

“Demarco is now brain dead. There is nothing more they could do for him. My sister is weak. She is not doing good. God help us. Please keep praying.”

“The laws of Barbados need to be amended to charge children as adults when they commit heinous crimes. Their parents must also be held accountable. The time for change is NOW!! I firmly believe that it is time parents are held accountable for the actions of their children who are "minors" in the eyes of the law so they think that they can get away with committing their brutal crimes!! It must stop. CHARGE THEM!! The time for CHANGE is NOW!”

In just over nine hours, the petition has amassed near 15,000 signatures.

In addition to the online petition, Chase has made a rallying cry for others to assist her in organizing a proposed #JUSTICEFORDEMARCO march. The appeal, also posted to her social media platforms, encouraged those interested to act. It read: “Who is willing to help me organize a #JUSTICEFORDEMARCO march? I will write to the Police Commissioner to request permission and assistance with logistics. I Am calling out all social activists, all children’s advocates!”

While demanding a need for change Chase stated that the demonstration will also be to stand in solidarity for all children who are bullied.

When contacted, Chase told Loop News: “As an educator by profession I know the long-lasting repercussions of bullying on children.”

Following on the heels of the instance of cyberbullying of 11-year-old Keishawn Thomas, who felt bullied after correcting his verbal slip on national television a few weeks ago, this recent incident is just “too much”, she said.

“We had to deal with Keishawn being cyberbullied and the entire country rallied behind him. It took two weeks for the public to be made aware that this child was beaten to a pulp. It is all just too much,” she lamented.

Chase wondered whether if Demarco was not from the lower socio-economic bracket if the public would have been made aware of his plight sooner and possibly alternate medical treatment could have been sought for him. Now she fears it may be too late.

In addition to bringing about awareness, the educator wants swift justice and for those responsible to be held accountable.

While some may label Chase as a social activist, she says advocacy is nothing new to her as it is something she has done since 1998 in her pageant days. With the advent of social media, she simply utilizes her platforms to highlight issues, agitate for justice and be instrumental in bringing about positive change.

She believes Barbadians in general are now made more aware of injustices because of these social media platforms and are becoming more vocal and playing more of an active role to “take back this country”.

CCB to roll out cyber-bullying program in schools

Kiwanis Club of Barbados on board for anti-bullying campaign