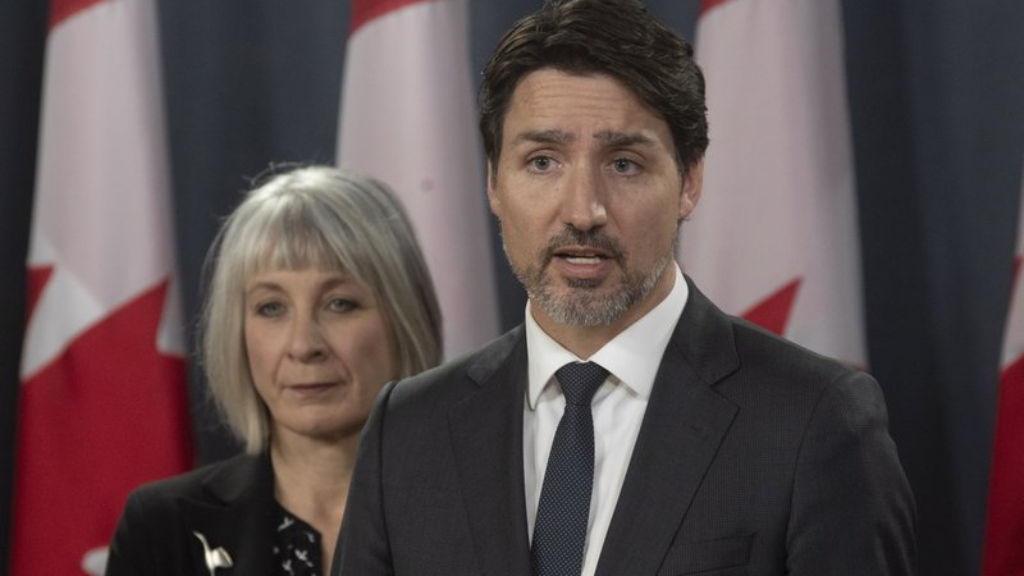 Minister of Health Patty Hajdu looks on as Prime Minister Justin Trudeau speaks during a news conference in Ottawa, Wednesday March 11, 2020. Canada is announcing $1 billion ($730 million) in funding to help health-care workers cope with the increasing number of new cases of coronavirus and to help Canadian workers who are forced to isolate themselves. (Adrian Wyld/The Canadian Press via AP)

Canadian Prime Minister Justin Trudeau said Monday he will close the country's borders to anyone who is not a citizen, an American or a permanent resident — and even they have to self-isolate for 14 days on arrival — due to the novel coronavirus pandemic.

Trudeau said Canadians who are not in Canada need to come home immediately and he said they must isolate themselves for 14 days after they arrive.

He also said those already in the country, "as much as possible should stay home." He spoke outside his residence, where he is self-isolating after his wife tested positive for the virus.

Trudeau said his government based its decisions on science and public health recommendation, but said Americans would be exempted despite cases surging in the US. "We recognize the level of integration of our two economies," he said.

The US is by far Canada's largest trading partner — accounting for 75 per cent of the country's exports. Trudeau has spoken to US President Donald Trump in recent days.

He said the country is taking "increasingly aggressive steps" to keep everyone safe.

The government is also restricting overseas flights to just four airports in Toronto, Montreal, Calgary and Vancouver, and mandating airlines to screen passengers for symptoms of the virus before allowing anyone to board a plane.

Trudeau said: "We can still slow the spread of this virus'' but it will take a major adjustment from everyone.