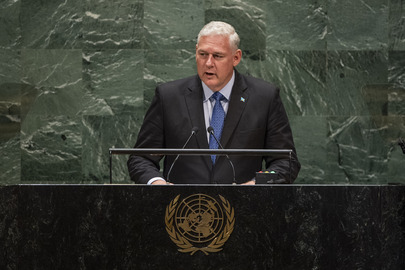 As nations around the world focus on the effects of climate change at the 74th General Assembly of the United Nations, St Lucia’s Prime Minister Allen Chastanet has told world leaders their urgent action was needed to reverse the damage already caused.

Addressing the grouping of nations in New York, he described it as disturbing that every September, when countries gathered for the annual session, it was against the backdrop of “another devastating extreme weather event”.

Related article :CARICOM Chair: Caribbean at risk of being uninsurable

“Have we already forgotten what befell Dominica in 2017 when Hurricane Maria ravaged that island causing a loss of 226% of GDP?

“Have we already forgotten Barbuda laid to waste by Irma or the British Virgin Islands and Anguilla,” he asked.

Chastanet, who is the current chairman of CARICOM, said when he visited the Bahamas three weeks ago following the passage of Hurricane Dorian, he witnessed the devastation that accompanied the category five cyclone which rested over the island for close to two days with winds over 180 miles per hour.

Chastanet, while reiterating comments made earlier by Barbados’ Prime Minister Mia Mottley that region was not looking for handouts, urged the world leaders to honour the commitments made to countries which were impacted by hurricanes.