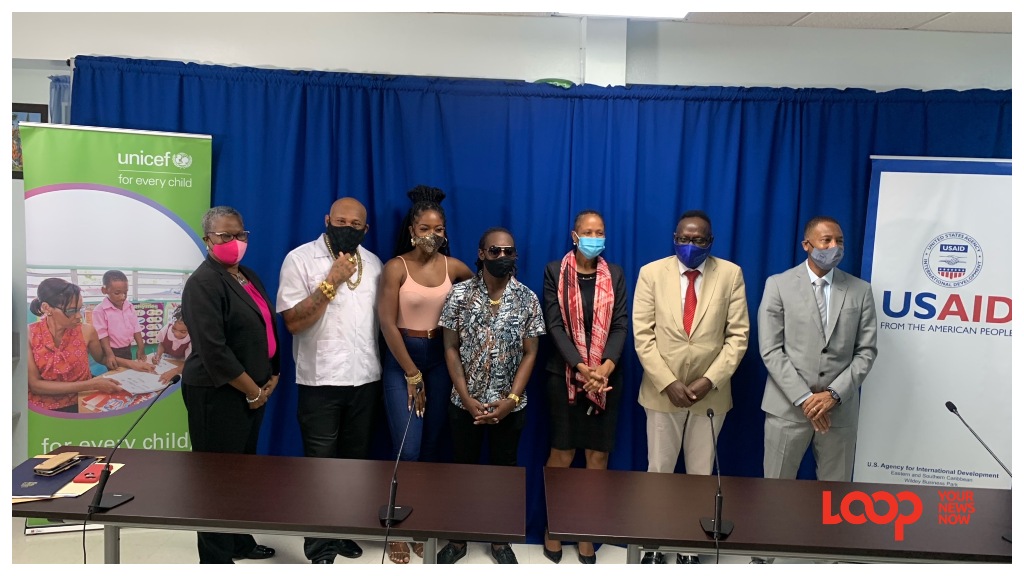 The Ministry of Education, Technological and Vocational Training (METVT) is heralding the message that “We’re Stronger Together”.

In this vein, they have released a new jingle specifically geared towards the student population throughout the island.

With its catchy lyrics, it is the hope that the jingle will serve to reinforce the message of the internationally recognised health and safety practices in this island’s continued fight against the novel coronavirus.

The song, with accompanying video, was released Friday, October 30 and features three of the island’s popular entertainers: Peter Ram, Faith and Mole. Both the jingle and video reinforce mask-wearing, hand sanitization and physical distancing, which have become the ‘new normal’ during the COVID-19 pandemic.

Speaking at a press launch held at the METVT on Friday morning, Minister of Education Santia Bradshaw explained the rationale behind the latest project.

“Our children are one of the nation’s most valuable resources and I do not take my task as minister responsible for education lightly. This ministry and I remain committed to safeguarding the future of tomorrow, by protecting our children, today. With that as our guiding mantra and in light of the fluidity of this present pandemic, this project was embarked upon, in earnest, with an aim to reinforce the various safety precautions in line with the established protocols for schools and, of course, because of my background, no doubt, in music, it had to be done through the use of music and videography. This effort has placed emphasis on health protocols relating to the washing of hands, the wearing of masks and adhering to physical distancing guidelines, along with other things.”

The song and video were both locally written and produced. The lyrics to the jingle were written by Peter Ram who was joined by Faith and Mole in its performance. Dwain Atrobus of BassInk Studios was responsible for the music production while Graham Cumberbatch and his team at MediaHouse were responsible for video production. The coordination of the entire project was executed by Ruel Ward, CEO of Pyramid Entertainment Management Inc.

Minister Bradshaw thanked the artistes, their management and the production team who collaborated to expeditiously bring the project to fruition.

The video features students from St George Secondary and St Ambrose Primary schools and will be promoted across social media platforms.

Education Minister urges students to wear masks outside of school too