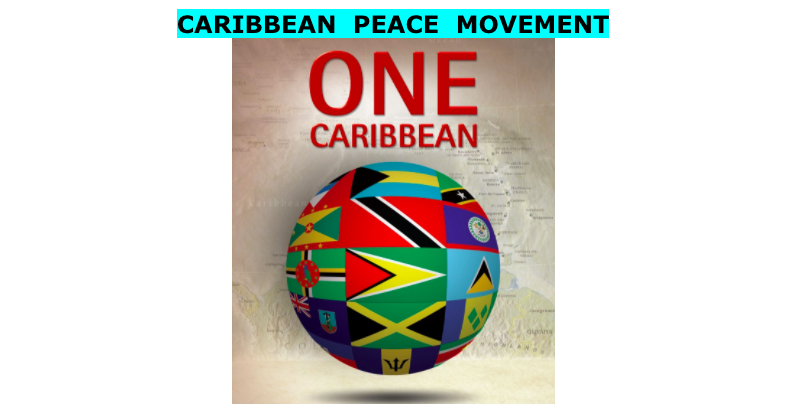 The Caribbean Peace Movement is speaking up for Venezuela.

The leaders of some Caribbean nations are today in hot water, while others are sitting pretty for taking action for the region’s friend – Venezuela.

This news came via the Caribbean Peace Movement (CPM) as concerned persons and organizations within the region signed their names to a letter penned to the Heads of Government of CARICOM on behalf of Venezuela, in hopes of gaining assistance for the nation and avoiding ‘a military coup’.

Standing a cut above the rest, the CPM and its supporters saluted “the Governments and political leaders of St. Vincent and the Grenadines, Dominica and Suriname for their dignified votes at the OAS meeting not only in support of sovereignty and self-determination in Venezuela, but also in defense of the principles of self-determination and sovereignty of CARICOM itself.”

However, others have come in for a lashing for going against Vnezuela and for keeping silent on this issue.

In the letter, the CPM stated that “As CARICOM citizens, we are writing to you to express our deep concerns about the ongoing imperialist assaults against our sister nation of Venezuela, and also about the very troubling stance of some Heads of Government of our regional body.

“We wish to make it unmistakably clear to you-- our Heads of Government-- that as CARICOM citizens we stand unwaveringly with our embattled sister nation of Venezuela in defense of its sovereignty and its right to choose its own political path to self-determination and development.”

Amongst the signatories so far are persons and associations from Barbados, Guyana, Jamaica, and Trinidad and Tobago, with the Jamaica Peace Council being the first signatory to the letter.

The letter dated February 26, 2018, goes on to state that “Unfortunately, at the recently held Organization of American States (OAS) meeting in Washington DC, some of our CARICOM member states -- specifically Jamaica, St. Lucia, Barbados, the Bahamas and Guyana -- chose to abandon the principles of collective leadership enshrined in the foundational document of the Treaty of Chaguaramas which have historically guided CARICOM’s foreign policy positions in relation to other countries.

“The unprincipled actions of the referenced member states led them to side with United States (US) imperialism by voting for a Resolution that is premised on the fraudulent notion that there is a breakdown of democratic order, rule of law, and social peace in Venezuela, and that the Presidential elections that are scheduled for the 22nd of April 2018 will not be democratic, transparent and fair.

“The said "Resolution of infamy" also encourages and portends an illegal and subversive intervention in the internal affairs of Venezuela with its demand that the Venezuelan Government postpone the Presidential election and open the country up to interventionist so-called "assistance" from OAS member states that are hostile to the Bolivarian Government.

“We believe that this unprincipled vote on the part of Jamaica, St. Lucia, Barbados, the Bahamas and Guyana is not only a despicable betrayal of CARICOM’s traditional principles of non-interference in the internal affairs of other nations and respect for other nations' right to self-determination, but that it is also a betrayal of a friend who has extended to us badly needed assistance through the Petro Caribe Energy Cooperation Agreement and other forms of aid to foster development and the prosperity of our peoples.”

Regardless of the fact that most of the signatories are from the territories being accused, they have still put their pen to paper to make their feelings truly known on this matter, and they further admonished those who sat idly by and let the wheels be set in motion as well.

“We, therefore, condemn in the strongest terms the machinations of these five CARICOM member states that have shredded the principles of CARICOM in order to assist the largest and most menacing imperialist nation of our hemisphere to achieve one of its prized geopolitical objectives, namely, the isolation and overthrow of Venezuela’s anti-imperialist revolution.

“We also profoundly regret that the Governments of Grenada, Antigua and Barbuda, Haiti, St Kitts and Nevis, and Trinidad and Tobago chose to sit on the fence at the OAS meeting by either abstaining in the vote or by absenting themselves from the Meeting, instead of voting in favor of upholding the principles of sovereignty and self-determination in relation to our sister nation of Venezuela.”

Unapologetically reiterating their solidarity with the anti-imperialist Bolivarian revolution in Venezuela, the CPM respectfully called upon all the Heads of Government of CARICOM “to staunchly defend the principles of self-determination, sovereignty, freedom, and the non-interference in the affairs of other countries.”

And they stressed, “Needless-to-say, it is our unbending belief that to defend these principles in Venezuela and all other states is to defend them in our CARICOM states as well.”

Below are some of the signatories so far: 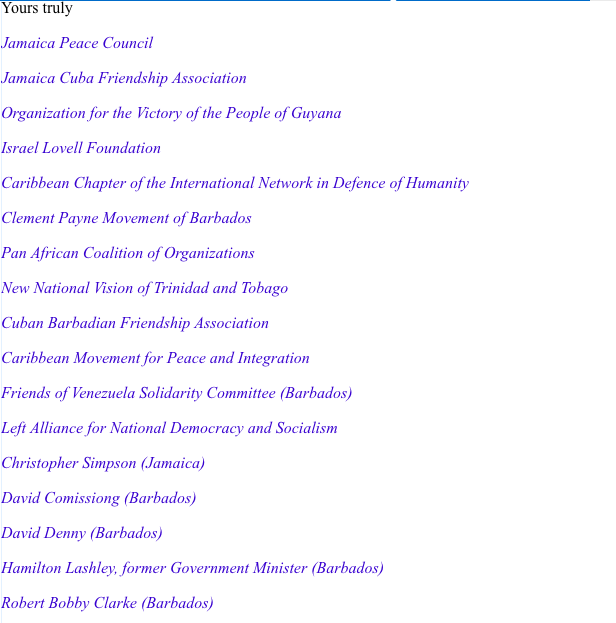