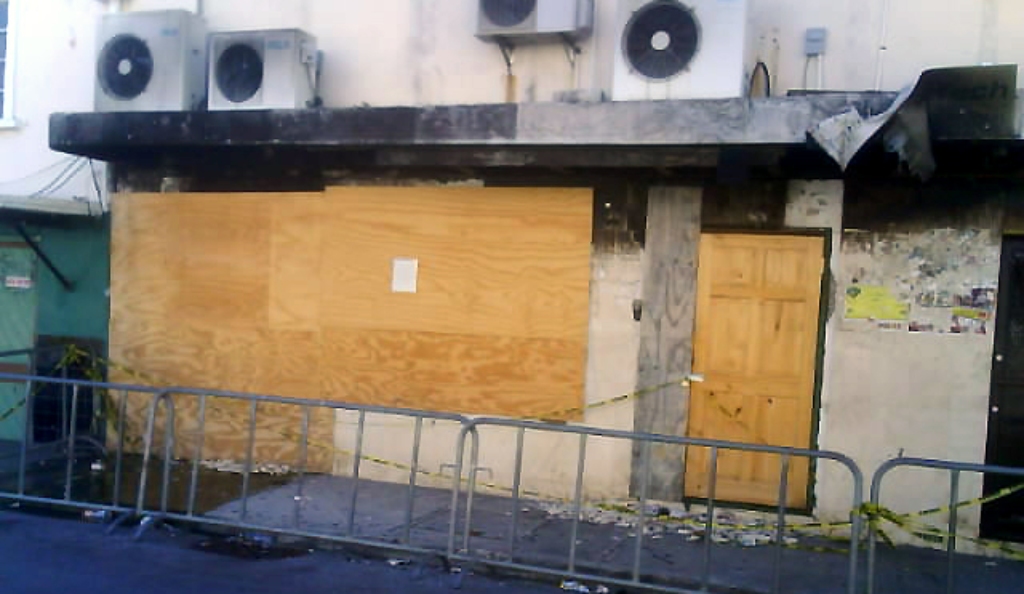 Campus Trendz location after the September 2010 fire. Since then in March 2017 the building was demolished. (Internet image)

This case which shook Barbados left six young women dead after the store they worked at and shopped in went up in flames, trapping them inside before fire officials could extinguish the blaze.

Today, in Port of Spain, Trinidad, the Caribbean Court of Justice (CCJ) held a Case Management Conference (CMC) re-opening the appeal of Renaldo Anderson Alleyne v The Queen. Alleyne had appealed against the judge’s imposition on him of six life sentences for the firebombing of a clothing store (Campus Trendz) in Barbados.

On January 2, 2019, the Court issued a CMC Notice requesting further information from the parties after discovering that Alleyne had been involved in the firebombing of another building (the Chicken Galore building) on August 13, 2010, less than one month before the Campus Trendz incident.

At the CMC hearing, the lawyers on both sides confirmed that Alleyne had pleaded guilty to aggravated burglary and arson in relation to the firebombing of the Chicken Galore building. This information, however, had not been brought to the Court’s attention during the hearing of Alleyne’s appeal against sentence in the Campus Trendz matter, held December 5, 2018.

In 2010, Renaldo Alleyne was convicted of manslaughter and sentenced to six concurrent life sentences for the Campus Trendz store incident.

At the Court of Appeal in Barbados, Alleyne argued that the life sentences imposed on him by the trial judge were excessive and further that the trial judge did not consider a discount for his early guilty plea.

In dismissing his appeal, the Court of Appeal held that his sentences were neither excessive, disproportionate or wrong in principle, given the seriousness of the offence, and that the issue of a discount did not apply to a life sentence. Alleyne appealed to the CCJ seeking to have the decision of the Court of Appeal overturned.

The CCJ last month, December 5, 2018 had reserved judgment in the matter.

However, in light of the new information regarding the Chicken Galore building incident, the CCJ at the CMC hearing held today, January 10, 2019, ordered the parties to file further written submissions. The Court requested further submissions on whether Alleyne’s guilty plea in relation to the Chicken Galore incident should have been considered by the Judge who sentenced him for the Campus Trendz incident.

The Court also asked whether  Alleyne’s plea of Guilty in respect of the Chicken Galore incident is relevant to the appeal before this Court. Additionally, the CCJ ordered the parties to give reasons why this information was not provided to the Court at the time when the Court heard Alleyne’s appeal on the Campus Trendz incident.

The Court advised that its judgment will be further reserved pending the filing of the above mentioned further submissions.

WATCH: Four businesses gone from Bridgetown in one blaze