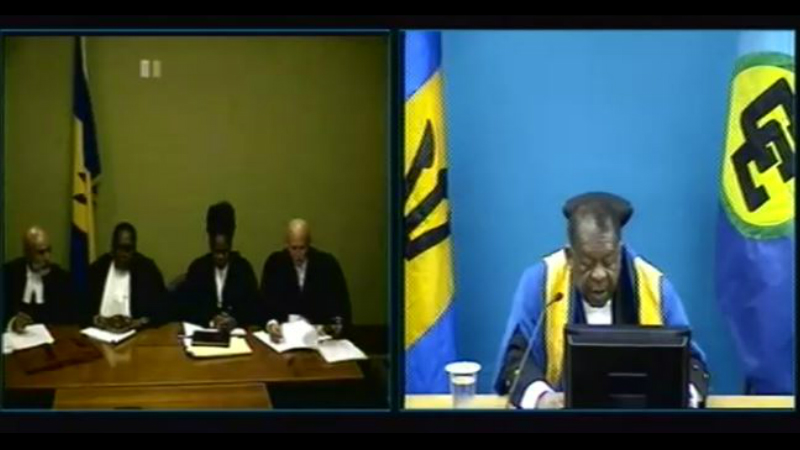 CCJ President Sir Dennis Byron (right) delivering the judgment today by teleconference to the attorneys for the applicant and respondent.

The Caribbean Court of Justice has ruled in favour of a Barbadian woman who challenged a Barbados Court of Appeal decision on her status with regard to the estate of her deceased live-in partner.

In the case of Smith v Selby the Caribbean Court of Justice (CCJ) today held that Ms. Katrina Smith should, in fact, be considered the spouse of her late partner, Mr. Albert Michael Selby.

The Court found that the definition of spouse, under Barbados' Succession Act, is a single woman who has cohabited for the statutory period of five years immediately preceding the death of her cohabitant partner has the right to inherit from him on his death.

The matter which was filed at the CCJ in March, centred on the interpretation of Barbados’ Succession Act which states: “for the purposes of this Act, reference to a 'spouse' includes: a single woman who was living together with a single man as his wife for a period of not less than 5 years immediately preceding the date of his death”.

The CCJ examined the legislative regime that existed prior to the Act and noted that prior to its enactment, the law excluded the survivor of a cohabitational relationship from benefiting on the death of the partner who had not left a will.

Ms. Smith and the late Mr. Selby had been living together since April 2002 until he died suddenly in April 2008 without leaving a will. He had been married, separated from his wife and officially divorced in 2004. The late Mr. Sealy had no children, was predeceased by his parents, and survived by his siblings including the respondent Mr. Albert Anthony Sealy.

The court concluded that the natural and ordinary meaning of the words in the Act, and a review of the Act together with its social and historical context, is that a single woman who has cohabited for the statutory period of five years immediately preceding the death of her cohabitant partner has the right to inherit from him on his death, provided he is a single man.

In making this decision, the CCJ set aside the earlier decision of the Barbados Court of Appeal and all orders for costs from the courts below. The Court declared that Smith was the spouse of the deceased and ordered Mr. Anthony Selby to pay costs in the sum of BD$20,000.

In handing down the judgment today via teleconference, CCJ President Sir Dennis Byron said, "The right of a survivor of a non-marital union to benefit from the estate of the deceased partner was not dependent on the status of marriage but on the duration of cohabitation with the deceased immediately preceding death."

"The cohabitation for five years immediately before the death of the deceased was determinative of the right to inherit as spouse, being the period which the legislature determined was a credible indicator of a commitment to a true union comparable to formal marriage. Provided the deceased was not married to someone else preceding death it was irrelevant whether the deceased was divorced or widowed for more or less than five years."

The CCJ expressed concern that it appeared to be the practice in Barbados for matters to be stayed pending the outcome of interlocutory appeals without a formal court order. The Court dissuaded the use of this practice except in circumstances where it was necessary after a full consideration of the relevant factors.

The Court commented that the nine years that elapsed since the death of the deceased was inconsistent with the overriding objective to resolve disputes justly and expeditiously. In this case, the CCJ noted that more than nine years had elapsed since the death of the deceased. The CCJ noted that such delay inevitably caused distress as no one had been appointed to administer Mr. Selby's estate. As a result, the CCJ sought to give a ruling as expeditiously as possible, the matter having been filed at the Court in March 2017.

CCJ President to leave office in 2018