Celebration of Cuban culture for 58th anniversary of Revolution 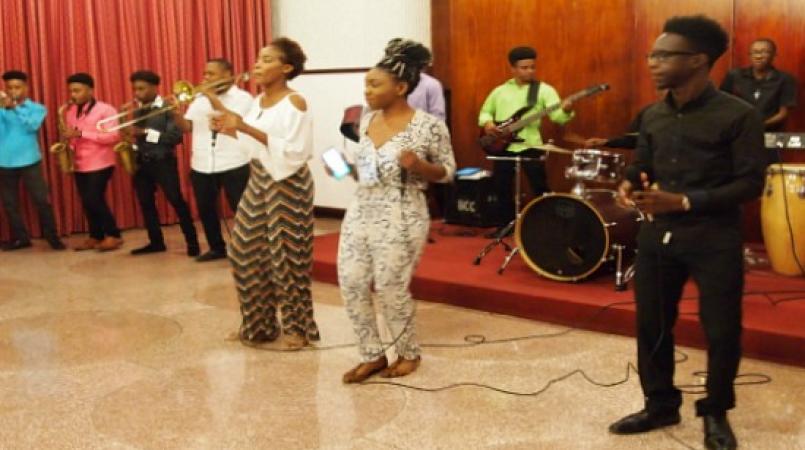 Those who attended the cocktail reception at the Grand Salle on Tuesday definitely went home feeling a greater appreciation of Cuban culture and music.

Members of the Barbados Labour Party (BLP) including Opposition leader Mia Mottley as well as officials from the National Union of Public Workers (NUPW) and the Congress of Trade Unions and Staff Associations of Barbados (CTUSAB) and government took in a bit of the celebrations. Members of the Pan-African community and the Chinese diplomatic corps were also in attendance.

The life of the party rested in the hands of the Barbados Community College Cuban Ensemble headed by tutor and musician, Darren Massiah. The eleven-member band belted out several Cuban classics including ‘Guantanamera’ and ‘El Cuarto de Tula’. Vocalists Kareem Agard, Claire Hunte and Adriana Mayers went the full hundred during the hour-long performance making it seem as though they had been born and raised in Cuba.

The horn section of the Cuban Ensemble was not to be overlooked as Nicholas Stephenson, Justin Baird, Shakhouri Thompson, Romario Wilkinson and Matthew Banfield all gave the audience sweet solo performances.

It was not long before the timid crowd broke out in salsa, even the Cuban Ambassador, Francisco Fernando Pena and his wife got in one the action. No doubt everyone went home satisfied and in full appreciation of all Cuba represents.