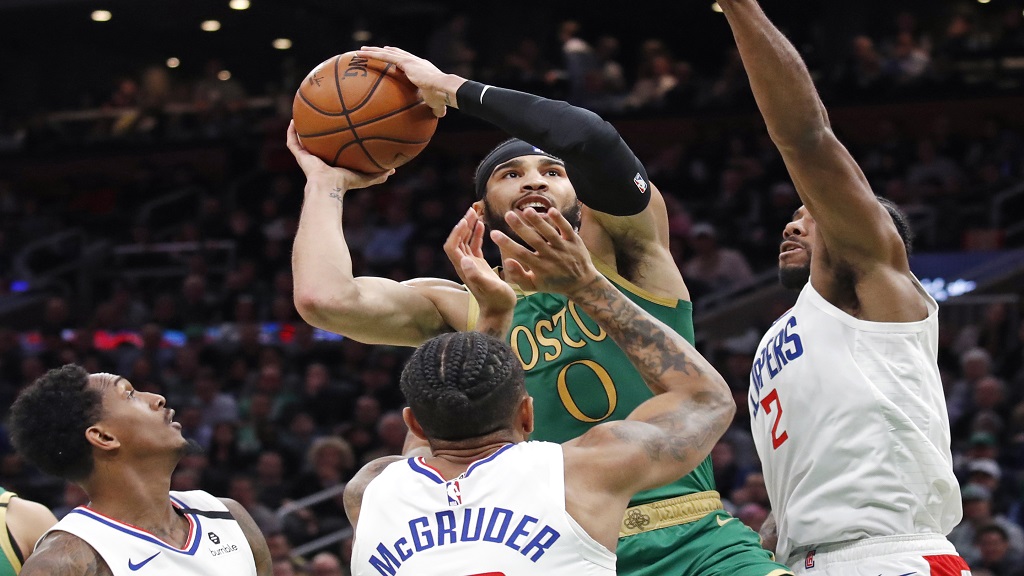 Boston Celtics forward Jayson Tatum (0) goes up to shoot against Los Angeles Clippers', from left to right, Lou Williams, Rodney McGruder and Kawhi Leonard in the first half of an NBA basketball game, Thursday, Feb. 13, 2020, in Boston. (AP Photo/Elise Amendola).

The Boston Celtics prevailed 141-133 against the Los Angeles Clippers after double overtime prior to the NBA All-Star break, while the Oklahoma City Thunder also won.

In the final two games before the All-Star Weekend in Chicago, the Celtics and Thunder both celebrated victories on Thursday.

Jayson Tatum, who will play for Team Giannis in Sunday's All-Star Game, led the Celtics with a game-high 39 points and nine rebounds against the Clippers in Boston.

Trailing the Celtics 114-111, Clippers recruit Marcus Morris Sr. made a three-pointer with 46.8 seconds remaining in regulation to send the game to overtime.

Clippers guard Landry Shamet then nailed a shot from beyond the arc to level proceedings at 127-apiece as double OT beckoned at TD Garden.

Lou Williams had 35 points for the Clippers, while Kawhi Leonard finished with 28 points and 11 rebounds on the road.

It was a tough night for the Clippers, who lost star Paul George to a strained left hamstring in the first half – the same injury that forced him to miss 10 games in January.