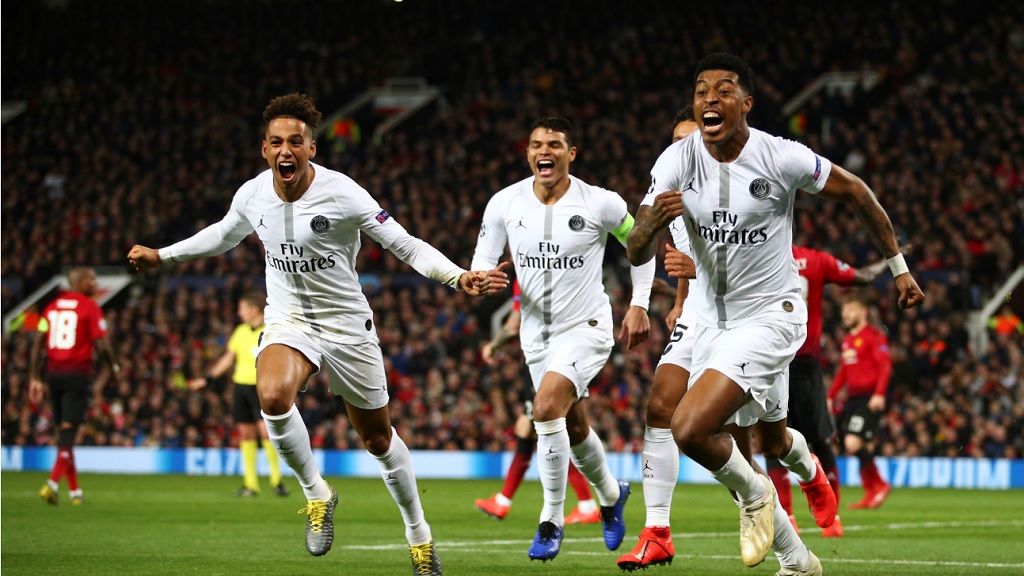 PSG's Presnel Kimpembe, right, celebrates with teammates after scoring the opening goal in their Champions League round of 16 match against Manchester United at Old Trafford in Manchester, England, Tuesday, Feb. 12, 2019.

Paul Pogba was sent off as Paris Saint-Germain (PSG) won 2-0 at Manchester United to take control of their last-16 Champions League tie, with Ole Gunnar Solskjaer tasting defeat for the first time since taking charge.

Injuries to Anthony Martial and Jesse Lingard dented United's attacking thrust and PSG scored twice in seven second-half minutes at Old Trafford on Tuesday to put a foot in the quarter-finals.

Presnel Kimpembe converted a corner from Angel Di Maria to score his first professional goal and the former United winger recorded another assist when he set up Kylian Mbappe for a crucial second.

Although PSG were without injured forwards Neymar and Edinson Cavani, United could muster no response with veteran goalkeeper Gianluigi Buffon completely untested and the Premier League side's task in next month's second leg looks huge, especially as Pogba will be banned.

Di Maria bent an early curler wide on his Old Trafford return then Mbappe missed the target after being sent through on goal by Julian Draxler's incisive pass.

United lost both Martial and Lingard to injury with Alexis Sanchez coming on moments before the interval and Juan Mata introduced for the second half.

David de Gea was tested for the first time in the 53rd minute, diving low to his left to push away Mbappe's header, but PSG opened the scoring from the resulting corner.

Di Maria's right-wing delivery curled over Pogba and Kimpembe shook off the attentions of Nemanja Matic to send a controlled volley into the roof of De Gea's net.

PSG almost scored a quickfire second when a thumping drive from Dani Alves flew just wide but they extended their advantage with a potentially pivotal second on the hour.

Di Maria was again the creator, finding too much space on the left wing to deliver a low cross that Mbappe finished superbly after powering through a gap in the middle of United's defence.

Solskjaer waited until the 84th minute to send on Romelu Lukaku but PSG held on comfortably, with United's misery complete when Pogba was shown a second yellow card for a foul on Alves.

What does it mean? Priceless PSG away goals

Thomas Tuchel's tactics worked to perfection with PSG denying United space to show off their counter-attacking skills, while injuries to Martial and Lingard stifled United. Solskjaer's side, beaten for the first time in his 12th match, now have a mountain to climb in the French capital next month.

Argentina winger Di Maria was subject to abuse from a section of the United fans, although he did perhaps provoke them with his celebrations after PSG's opening goal. What is certain is Di Maria showed far more productivity in his two assists than during his forgettable spell at United.

France international Pogba has been increasingly influential in United's Premier League recovery, but he lost the midfield battle against the excellent Marco Verratti. Allowing his frustration to boil over in the closing stages with a rash challenge showed his immaturity and United will miss him in Paris.

PSG are away to Saint-Etienne on Sunday in Ligue 1, with United going to Chelsea in the FA Cup fifth round the following day. United will try to overturn their two-goal decific in Paris when the return leg is played on March 6.