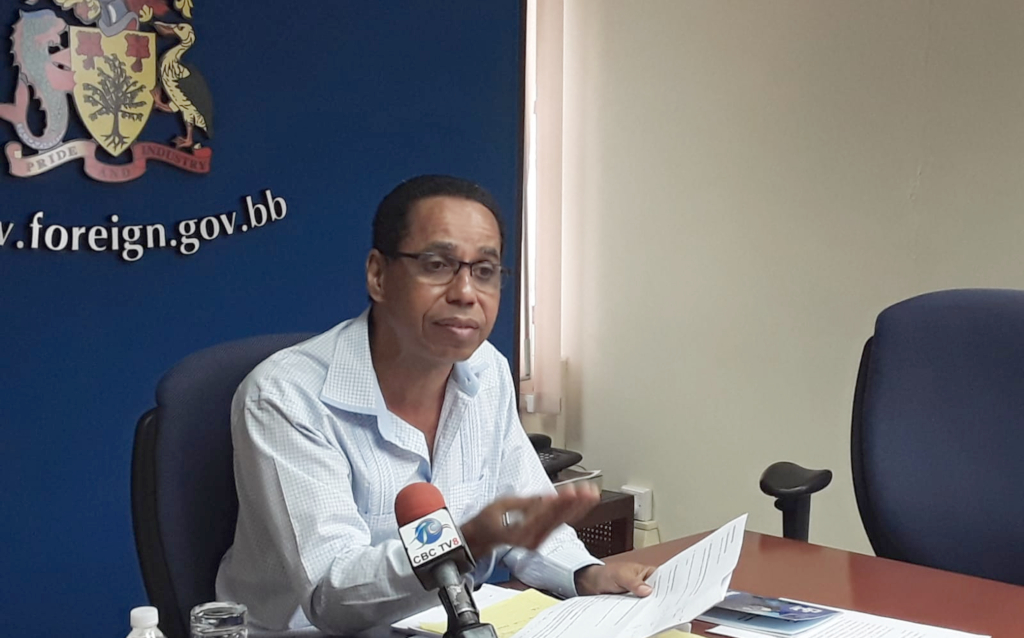 CARICOM Heads working to improve transportation in the Region

A thorough review of the sale tax on airline tickets is to begin soon. This is an initiative that heads of government of the Caribbean Community (CARICOM) believe is necessary and urgent.

This was one of the decisions that were made at the recent meeting of CARICOM, held in St. Kitts and Nevis.

Barbados Ambassador to CARICOM David Comissiong said, the heads looked in-depth at the issue of intra-regional travel and this was one of the issues that they singled out that needs attention.

“The heads recognize that there is a problem to the degree to which airline passages for Intra-Caribbean Travel are taxed, that there are many sale taxes and that these taxes needs to be rationalized, they need to be scaled back in order to make air travel within the Caribbean cheaper and more affordable for Caribbean people."

Ambassador Comissiong was speaking to the media yesterday, Thursday, March 7, 2019, at the Ministry of Foreign Affairs office at Culloden Road, where he gave a review of the meeting.

He said the heads have already commenced the review of the taxes, noting that the technical assistance is going to be given to Caribbean governments to see whether some of the taxation can be removed.

Discussions on LIAT he said took up a lot of time at the meeting, as the heads tried to come up with a rescue plan that could help the cash-strapped airline – an airline that he said is in crisis.

The role of LIAT he stressed cannot be undersestimated since it services most of the Caribbean, but the heads are of the view that more countries, especially those who benefit from the service, should invest.

“It was recognized that LIAT simply cannot continue to bear loss-making flights, and it has been agreed that where they are loss-making flights and individual countries wish to continue because it offers convenience to their citizens or are otherwise valuable to their country that they will pay subsidies to LIAT to keep those flights going,” he disclosed.

The heads according to Comissiong, also recognized that over the years some of benefits that employees have bargained for are unsustainable for an airline in the financial condition that LIAT is in, and therefore some of the benefits must be scaled back.

The issue of Maritime transportation was also discussed. Prime Minister with responsibility for Maritime Transportation Ralph Gonsalves of St. Vincent and the Grenadines made a report and the much talked about Ferry was high on his list.

“It has been decided that CARICOM will fully explore the concept of developing a regional ferry system".

It was agreed that it will be a joint Private-Public Sector initiative with private sector being the owners of the ferry.

A team he explained is being pooled together to put the project in place. That, he further explained calls for all the studies that have been done on the ferry service and also examining the records of other regions of the world.

There is already an outline for how financing for the project can be attained, the role that government will play in making some investments in what will fundamentally be a private sector initiative and the role that the governments will play in helping with the port facilities to facilitate the movement of the ferry across the Caribbean.

Ambassador Comissiong assured that the meeting was significant and he pinpointed other issues including the EU Blacklisting of CARICOM member states, The Venezuela Impasse, and Security and the CSME along with Public Procurement.