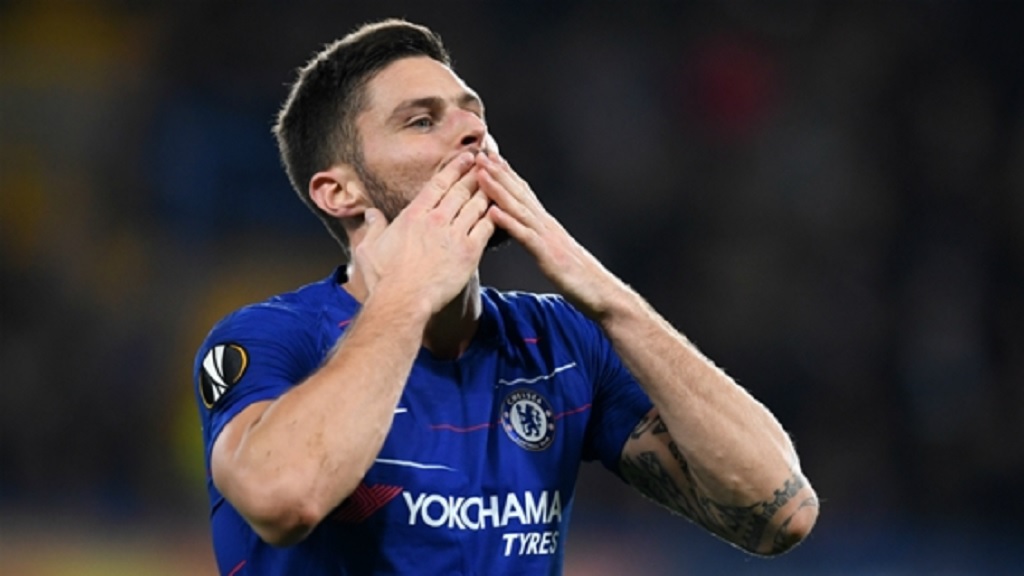 Olivier Giroud's first-half double set up a comfortable 4-0 home win over 10-man PAOK in which Callum Hudson-Odoi opened his Chelsea account, Maurizio Sarri's side topping Group L of the Champions League after extending their run of wins to five matches.

BATE's 2-0 home defeat of Vidi earlier in the day ensured Chelsea could not be caught in top spot, with Sarri making 10 changes from a crushing 3-1 loss at Tottenham that ended their unbeaten start to the Premier League season last time out.

Yevhen Khacheridi's early red card gave Chelsea's young guns plenty of chances to fire but it was Giroud's well-taken brace before the break that put the Blues on track for victory.

And 18-year-old Hudson-Odoi hit his first Chelsea goal with a fine finish before substitute Alvaro Morata headed a late fourth, with Group L's bottom side PAOK now unable to qualify.

Khacheridi's dismissal in the seventh minute left PAOK in deep trouble, the centre-back tripping Giroud as the France striker ran on to a loose pass from Leo Matos.

Hudson-Odoi was proving lively and another Chelsea youngster, Ruben Loftus-Cheek, forced a superb fingertip save from Alexandros Paschalakis with a fizzing 25-yard drive.

Chelsea's opener arrived in the 27th minute, a long ball over the top from Cesc Fabregas beautifully controlled by Pedro, who held the ball up to wait for support and laid it off for Giroud to pass a first-time finish across Alexandros Paschalakis.

Hudson-Odoi, making his first Europa League start, then hit the crossbar with a 20-yard curler but Giroud's controlled volley from another lovely lofted Fabregas pass doubled Chelsea's advantage and recorded his fourth goal in three games for club and country.

Teenager Hudson-Odoi scored the goal his vivacious performance deserved on the hour-mark, cutting in off the left flank to rifle a right-footed drive inside Paschalakis' near post, with Fabregas collecting another assist.

Andreas Christensen's substitution due to injury was a sour note for Chelsea, who were able to rest Giroud and Pedro in the closing stages with Group L's top spot in the bag.

And with 12 minutes to go Giroud's replacement Morata nodded in Hudson-Odoi's right-wing cross to complete the scoring.

When the Europa League resumes after Christmas, Sarri may have to decide how seriously he wants to take the competition. Chelsea are among the favourites and have enough quality squad depth to go far, but if they are in the Premier League title race that will likely be the Blues' main priority.

Playing against mediocre opposition who were down to 10 men suited Fabregas, but he provided a timely reminder to Sarri of his playmaking talents with two assists and a hand in the opener. Sarri suggested this week N'Golo Kante is not the right sort of midfielder to play in front of his defence - Fabregas may be. Hudson-Odoi also grasped his chance to impress, becoming the youngest player to score a goal in the Europa League since 2009 and crossing for Morata's goal.

Perhaps Khacheridi should have let Giroud run into the penalty box rather than bring him down, but a poor pass from Matos put the Ukraine defender in a difficult situation. It may have been Khacheridi who walked, but Matos must also take responsibility for PAOK's early red card.

Chelsea host Fulham in a Premier League London derby on Sunday, while Greek league leaders PAOK are away to Lamia a day late. On matchday six of the Europa League, Chelsea are at Vidi while PAOK host second-placed BATE in their Group L closer.