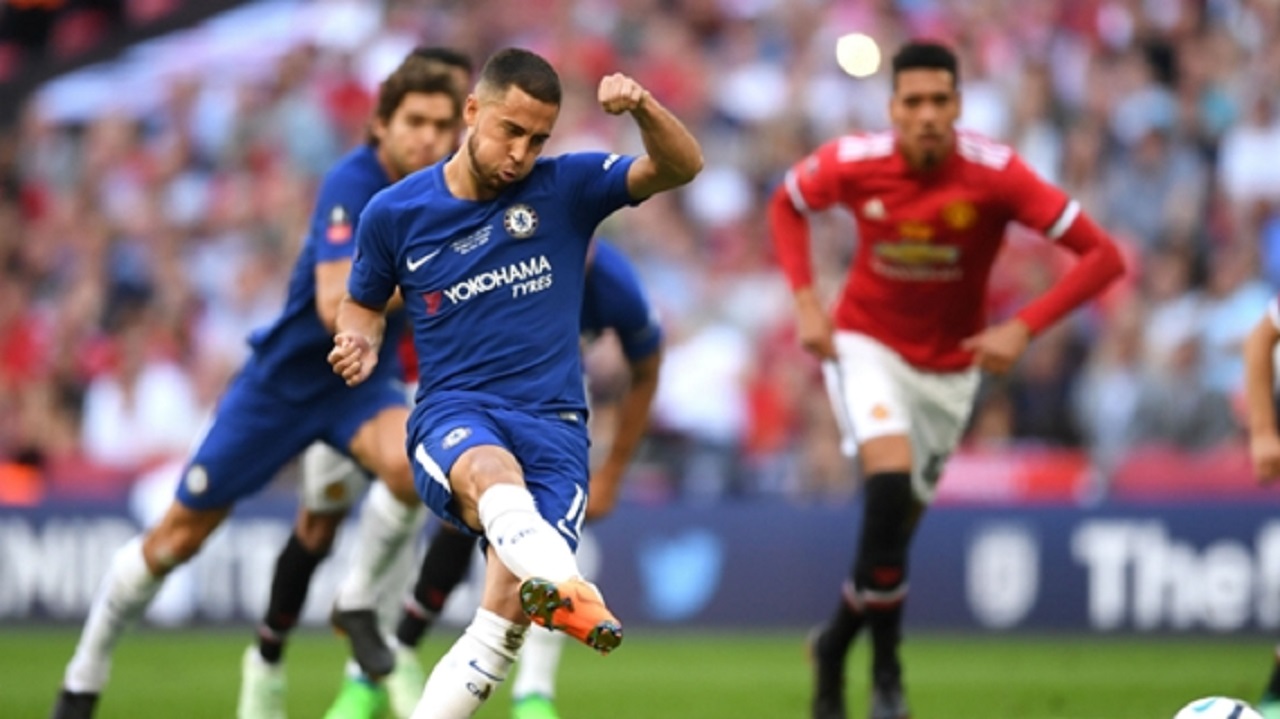 Eden Hazard inspired Chelsea to a 1-0 victory over Manchester United in the FA Cup final at Wembley on Saturday.

The 27-year-old forward fuelled speculation over his future this week by stating he will wait and see how Chelsea's close-season transfer policy develops before committing to a new contract at Stamford Bridge.

But he was all business at England's national stadium as he turned the first half into an ordeal for Phil Jones – the United defender whose clumsy foul meant Hazard won and converted a 22nd-minute penalty.

United improved upon a tepid showing after the break and Alexis Sanchez had a goal ruled out for offside, but even the late introduction of Romelu Lukaku on his return from an ankle injury could not force an equaliser.

It meant a sweet victory for Antonio Conte over his rival Jose Mourinho on what could prove his farewell outing as Chelsea coach, with the FA Cup a notable consolation after their Premier League title defence slumped to a fifth-place finish.

As in the semi-final win over Tottenham, David de Gea was preferred to United's regular cup goalkeeper Sergio Romero and the Spain international was called upon in the ninth minute.

Jones gave away possession and Tiemoue Bakayoko set Hazard running at the backpedalling England defender, who he skipped past and forced De Gea to save with his right boot at the near post.

Bakayoko and Sanchez had half-hearted penalty appeals turned down but there was little doubt for referee Michael Oliver when he later pointed to the United spot.

An utterly hapless start to the game continued for Jones, who blundered through Hazard as the Belgium star darted around him after bringing Cesc Fabregas' lofted pass under his spell.

Conte was furious on the touchline after Jones was only yellow carded – in line with the International Football Association Board update brought in from last season – but Hazard was a picture of calmness as he stroked home, sending De Gea the wrong way.

Jones had a chance to make amends but headed wide at the far post from Ashley Young's left-wing cross, with United belatedly arriving as an attacking force in the closing minutes of the half.

Mourinho's side enjoyed their first sustained spell of pressure early in the second half, with Ander Herrera liberated from attempting to shackle Hazard and lending greater impetus to United's midfield play.

Thibaut Courtois beat away a drive from Rashford and Pogba saw a deflected 57th-minute shot loop behind, before Nemanja Matic scuffed wide wastefully against his former club.

The pressure looked to have told in the 63rd minute but Sanchez was fractionally offside – a decision confirmed by VAR – when he prodded in after Courtois denied Jones.

Chelsea attacks had become a rarity by the time N'Golo Kante marauded forward and played in Marcos Alonso. The wing-back was denied by his countryman De Gea and Young escaped penalty claims for handball as Chelsea followed up.

Courtois denied Rashford one against one before the England forward made way for Lukaku, and Mourinho would no doubt have preferred a glorious 82nd-minute headed chance fell to the Belgian as opposed to Pogba.

Hazard waiting for Chelsea signings before deciding on contract