Chelsea Tuach, Chelsea Roett into Round 4 of Barbados Surf Pro 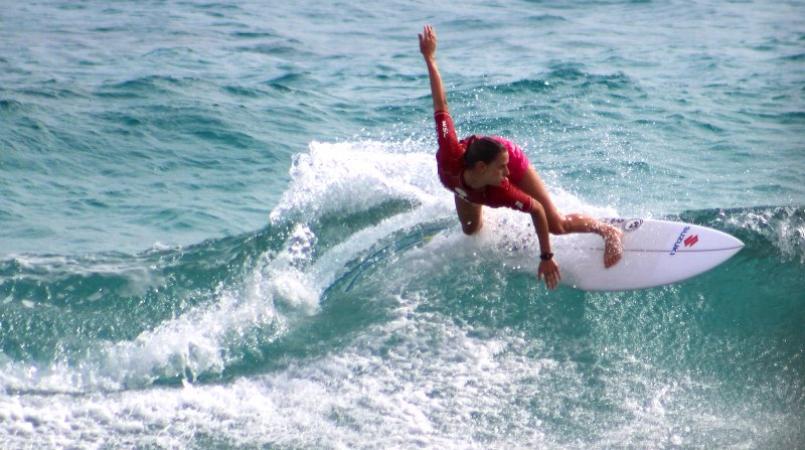 There were contrasting Heats for Barbados’ top two female surfers, Chelsea Roett and Chelsea Tuach, when the curtains came down on Day 3 of the Barbados Surf Pro QS 3000.

Taking to the water today at Drill Hall Beach, St. Michael, Roett opened Round 3 for the females in the afternoon.

Roett, who won the Barbados Independence Pro Open Women last year, led the Heat for most of the session with favourite and former Championship Tour (CT) surfer Alessa Quizon from Hawaii also in the Heat.

It was in the last five minutes that positions in the standings began to move around. With Roett falling from first to third, in a last-ditch effort she caught her final wave which saw the horn going after she had completed some of her slashes and slices.

It was just in the nick of time too, as she earned just enough to jump back into second place and qualify for Round 4 with 11.16. Quizon won the Heat with 13.60.

Tuach entered the water for the final Heat of Day 3 a few hours after Roett.

Though admitting she had some nerves as it was her first time hitting the water for the competition, she turned in a well put together Heat performance, with two waves scoring in the 7-point range to easily win the Heat and advance to the next round with a score of 14.74.

New Zealand's Paige Hareb and also a former CT surfer was a surprise exit in Heat 5 which was the same Heat in which 14-year-old wildcard selection Kirra Pinkerton (USA) was able to finish second and move on to Round 4.

“The nerves have been building up so much just waiting to get in the water so it felt great to get in there and get on a couple,” Tuach told the WSL. “I feel really good, my boards feel great and it’s my homebreak - it just has a good, positive and inspiring energy around it with all my support on the beach. It was a bit surreal for me to see all the international competitors arriving in Barbados to compete here. It’s been something we’ve wanted for so long and it’s been going so smoothly. This is something that’s very inspiring to the Barbadians to see all these surfers come here and surf our break, we’re seeing the calibre we have to be at. I’m just really excited and can’t wait for the rest of the week to unfold.”

The Barbados Surf Pro ?runs from April 11 - 16. It is the first time a World Surf League (WSL) Qualifying Series event is being held in Barbados.