China imports from US plunge 31% in June amid tariff war 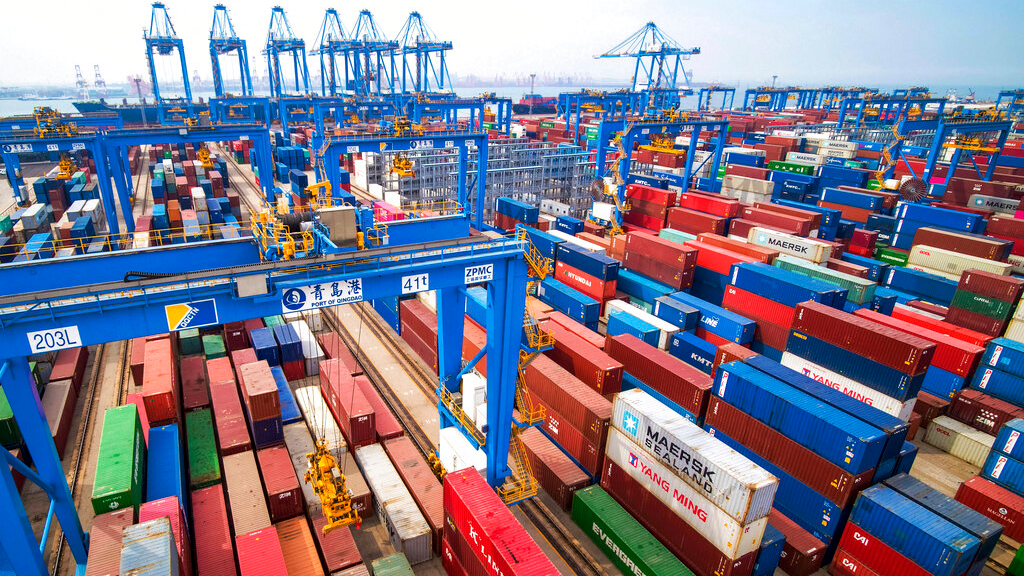 In this Tuesday, May 14, 2019, photo, containers are piled up at a port in Qingdao in east China's Shandong province. China's imports from the United States plunged 31.4% in June from a year earlier amid a tariff war with Washington, while exports to the U.S. market sank 7.8%, Customs data showed Friday, July 12, 2019. (Chinatopix via AP)

China's trade with the United States plunged in June amid a tariff war with Washington over Beijing's technology ambitions that has battered exporters on both sides.

Imports of U.S. goods fell 31.4% from a year earlier to $9.4 billion, while exports to the American market declined 7.8% to $39.3 billion, customs data showed Friday. China's trade surplus with the United States widened by 3% to $29.9 billion, potentially giving its critics ammunition to demand Washington take a hard line with Beijing.

Presidents Donald Trump and Xi Jinping agreed in June to resume talks on the fight over U.S. complaints about Beijing's trade surplus and plans for government-led development of technology industries. That helped to calm financial markets but economists say the truce is fragile because the conflicts that caused talks to break down in May persist.

Trade has weakened since Trump started hiking tariffs on Chinese goods last June. Beijing retaliated with its own penalties and ordered importers to find non-U.S. suppliers.

Envoys talked by phone Tuesday in their first contact since Trump and Xi met in Japan, the Chinese Commerce Ministry said. It gave no details or a date for more contacts.

"Our base case remains that trade talks will break down again before long," said Julian Evans-Pritchard of Capital Economics in a report.

Trade weakness has added to pressure on Xi's government to shore up economic growth and avoid politically dangerous job losses.

Washington is pressing Beijing to roll back plans for government-led creation of Chinese global competitors in robotics, electric cars and other technologies. The United States also wants other changes including cuts in subsidies to Chinese industry.

Beijing agreed last year to narrow its trade surplus with the United States by buying more American natural gas and other exports but scrapped that plan after one of Trump's tariff hikes. The Chinese government said in June that any purchases must be at a reasonable level, suggested Beijing was becoming more cautious about making big commitments before it sees what Washington offers in exchange.

Trump accused Beijing on Thursday of backsliding on promises to buy more American farm goods. He said on Twitter that "China is letting us down."

Trump's statement "highlighted how more speed bumps may remain in the road ahead," said Craig Orlam of OANDA in a report. "While a deal makes sense for both sides this year, it's far from guaranteed and could hit many more snags."

Importers of American soybeans and other goods are trying to switch to Brazilian, Russian and other sources, but supplies are limited and costs are higher. Farmers who use soybeans as animal feed have been told to switch to other grains.

While American exporters have been hit hardest, Chinese industries including electronics that Beijing sees as its economic future have suffered double-digit declines in sales to the United States, their biggest market.

Economists say even if a settlement with the U.S. is reached, China's exports this year will be lackluster due to weak global demand, putting pressure on manufacturers that support millions of jobs.