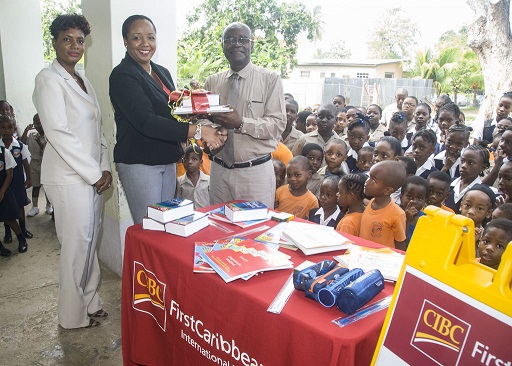 Eagle Hall Primary School has started to feel the positive impact of its annual reading week.

Principal of the school, Mr. Orlando Jones said the emphasis on reading is not only enhancing his pupils’ ability to cope in the class room, but it is also improving their social skills and many of them are now better able to discuss issues and settle their differences amicably.

Mr. Jones was commenting following a presentation of books and school supplies to the school during its morning assembly, by officials of the Operational Risk Department of CIBC FirstCaribbean International Bank.

The school principal thanked the bank, adding that the materials were selected based on the book lists for several classes. He said that the school’s catchment area was not generally made up of well-off families and the books would go directly to students who needed them most so that they would be able to begin the school year, this September well equipped.

In reply, Director of Operational Risk, Khadija Bourne explained that back-to-school was generally an expensive venture for parents and guardians and the bank recognised the need to provide help particularly to those less fortunate.

Ms. Bourne pointed out that the project, which falls under the bank’s Adopt-a-Cause programme, was also aimed at promoting the importance of reading to the students’ overall development. She added that the presentation was therefore not a one-off activity but that members of the bank’s Operational Risk team would be volunteering their time to share in a series of reading sessions during the school’s reading week and will also give motivational talks.

Reading week is an annual event at Eagle Hall Primary, which the headmaster said was aimed at encouraging reading among his pupils as he recognised that it empowers them and opens global activities to them.