Natalie 'Natlee' Harewood has recently announced her intention to contest the 2018 General Elections as a candidate in The City and it appears as though her support is quickly growing.

Harewood has gained social media notoriety after she released the soundtrack 'Dirty Harry', detailing her experience with a client who wished to take his relationship with her more seriously. Though prostitution is illegal in Barbados, Harewood has never hidden the facts about her source of income and profession. 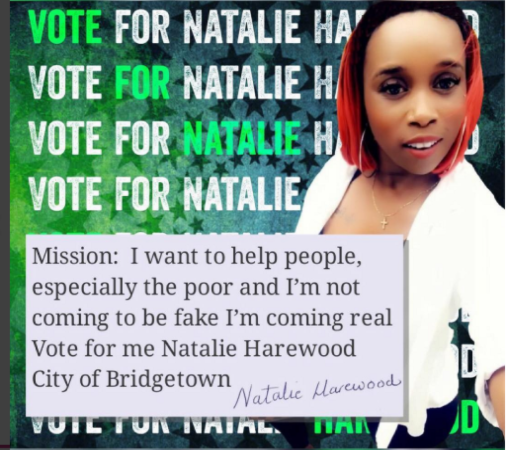 Loop News visited The City today to find out how residents were viewing Harewood as a potential representative. There were mixed views about her candidacy.

One resident, Charles Harte said Harewood, despite her profession, had the right to contest the seat. He said people may perhaps judge her harshly but he believed her intentions were good.

Harte added there were many in the area who were in the same profession so they should not criticize Harewood.

"There are a lot of them out here that are like that, so they shouldn't really cry her down."

Harewood's biggest supporter was perhaps resident, Kenny Browne, who stated he was even willing to assist Harewood on the campaign trail. Browne said he believed many in the Nelson Street area had no intention of voting in the upcoming election due to dissatisfaction with the government as well as their Opposition representative.

Nevertheless, he said he believed Harewood will amass a large number of votes, as he noted she is of the people and for the people.

"I don’t believe she will win but I believe she will get a good set of votes. Why you think Natlee is do what she do? Because she know the struggle. Obviously they will take Natlee for a joke but Natlee have the right motive. Natlee means well. She wants what all of we want so she is the right body," Browne stated confidently.

Support for Harewood was not felt by all, however, as was clear with one 73-year-old resident who requested anonymity. She said she believed no one in The City would take Harewood's candidacy seriously and suggested she stick with her profession and stay out of the political arena. The resident stated proudly she was a staunch supporter of the BLP candidate, Bostic and Harewood should not run "around here".

UPDATE: Just a few hours ago, Harewood made an announcement on her Instagram page, stating she will officially be quitting her job as a prostitute to dedicate herself fully to her political career.