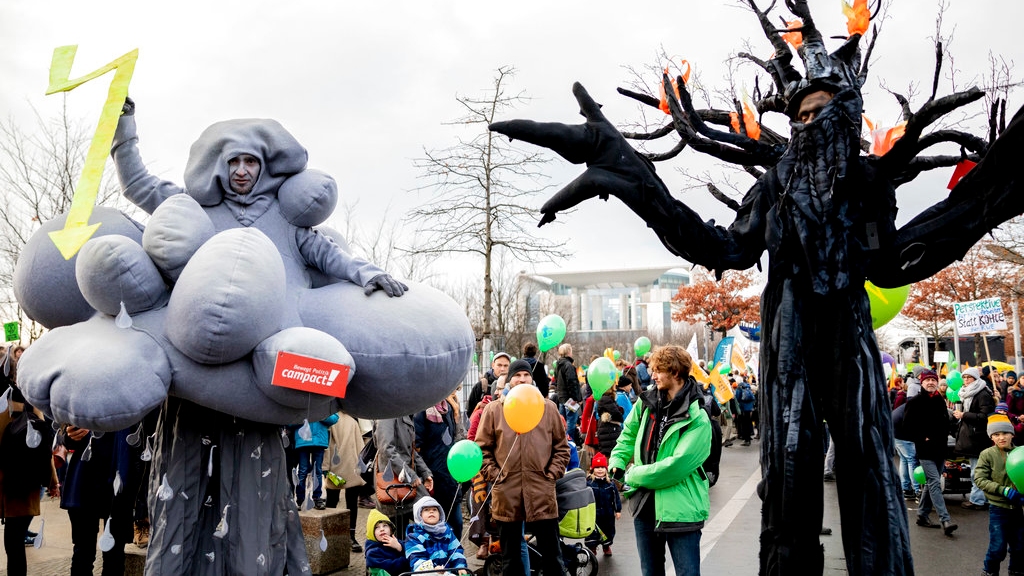 Demonstrators take part in a climate demonstration in Berlin, Germany, Saturday, Dec. 1, 2018. Thousands of people are marching in Berlin and Cologne to demand that Germany make a quick exit from coal-fired energy, a day before a U.N. climate summit opens in neighboring Poland. (Christoph Soeder/dpa via AP)

Negotiators from around the world began two weeks of talks on curbing climate change Sunday, three years after sealing a landmark deal in Paris that set a goal of keeping global warming well below 2 degrees Celsius (3.6 degrees Fahrenheit).

Envoys from almost 200 nations gathered in Poland's southern city of Katowice, a day earlier than originally planned, for the U.N. meeting that's scheduled to run until Dec. 14.

Ministers and some heads of government are joining in Monday, when host Poland will push for a joint declaration to ensure a "just transition" for fossil fuel industries like coal producers who are facing closures as part of efforts to reduce greenhouse gas emissions.

The meeting received a boost over the weekend, after 19 major economies at the G-20 summit affirmed their commitment to the 2015 Paris climate accord. The only holdout was the United States, which announced under President Donald Trump that it is withdrawing from the climate pact.

"It is sad that the federal administration of the United States, a country that is increasingly feeling the full force of climate impacts, continues to refuse to listen to the objective voice of science when it comes to climate change," Figures said.

"The rest of the G-20 have not only understood the science, they are taking actions to both prevent the major impacts and strengthen their economies," said Figueres, who now works with Mission 2020, a group that campaigns to reduce greenhouse gas emissions.

The meeting in Katowice is regarded as a key test of countries' willingness to back their lofty but distant goals with concrete measures, some of which are already drawing fierce protests . At the top of the agenda is the so-called Paris rulebook , which will determine how governments record and report their greenhouse emissions and efforts to cut them.

Separately, negotiators will discuss ramping up countries' national emissions targets after 2020, and financial support for poor nations that are struggling to adapt to climate change.

The shift away from fossil fuels, which scientists say has to happen by 2050, is expected to require a major overhaul of world economies.

"The good news is that we do know a lot of what we need to be able to do to get there," said David Waskow of the World Resources Institute.

Waskow, who has followed climate talks for years, said despite the Trump administration's refusal to back this global effort the momentum is going in the right direction.

"It's not one or two players anymore in the international arena," he said. "It's what I think you could call a distributed leadership, where you have a number of countries — some of them small or medium-sized — really making headway and doing it in tandem with cities and states and businesses."

Later Sunday, protests were planned by environmental activists calling for an end to coal mining in Poland, which gets some 80 percent of its energy from coal. Katowice is at the heart of Poland's coal mining region of Silesia and there are still several active mines in and around the city.

On Saturday, thousands of people marched in Berlin and Cologne to demand that Germany speed up its exit from coal-fired power plants.

G-20 shut Trump out on climate, strike deal on trade