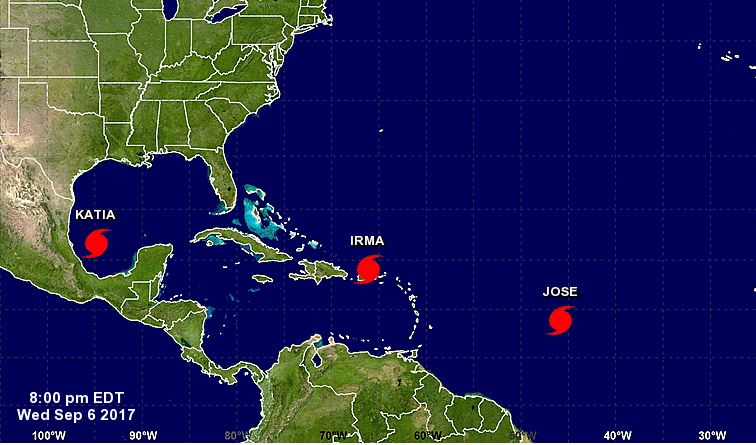 Hurricanes Irma, Jose and Katia have formed in the Atlantic.

There is a possibility for future hurricane seasons to have stronger systems if sea temperatures continue to rise.

This is the prediction given by climatologist with the Caribbean Institute of Meteorology and Hydrology (CIMH), Cedric Van Meerbeeck.

The season so far has been quite active as storms and hurricanes continue to come in quick succession. Tropical Storm Harvey passed through the Caribbean in the middle of August and went on to cause record-breaking damage in Texas. Now, Hurricane Irma, Hurricane Jose and Hurricane Katia are coming through the Atlantic Ocean in the short space of a week.

He explained factors such as temperatures in the Atlantic Ocean being approximately 1 -1.5 degrees warmer than usual for this time of the year was one of the reasons why storms were becoming more intense and quickly developing into hurricanes.

“Because they are warmer than usual, there is more energy available for storms to pick up. Besides that, there are other factors in play but those are weather-related so they are more short term. Right now in terms of weather, there is not much wind shear in the atmosphere so that means there is a different direction of wind. A set of storms can grow more easily into a tropical storm or hurricane.”

Hurricane Irma is one that grew quickly and significantly over the last few days and has been documented as one of the most dangerous hurricanes on record, with powerful wind speeds measuring up to185 miles per hour.

Van Meerbeeck went on to say that although the effects of climate change on weather patterns cannot be ignored, one single extreme weather event is not usually attributed solely to climate change. He said while warming sea temperatures have the potential to create “very strong hurricanes”, the silver lining is that there may not be an increase in the number of systems for the season.

“We have not seen a very long-term trend in the number of named storms. So although it is a suggestion that in this century we might see our stronger storms getting stronger and more frequent, the total number of storms actually might not change.”

He said “if all goes well” by October or November there should be a decrease in activity, however, it must be noted that the increase in sea temperatures could prolong activity with systems such as cyclones developing.

He added the prediction for a longer than usual hurricane season was just that - a prediction and not “absolute truth” and assured if there is activity after November it is not likely to affect Barbados.