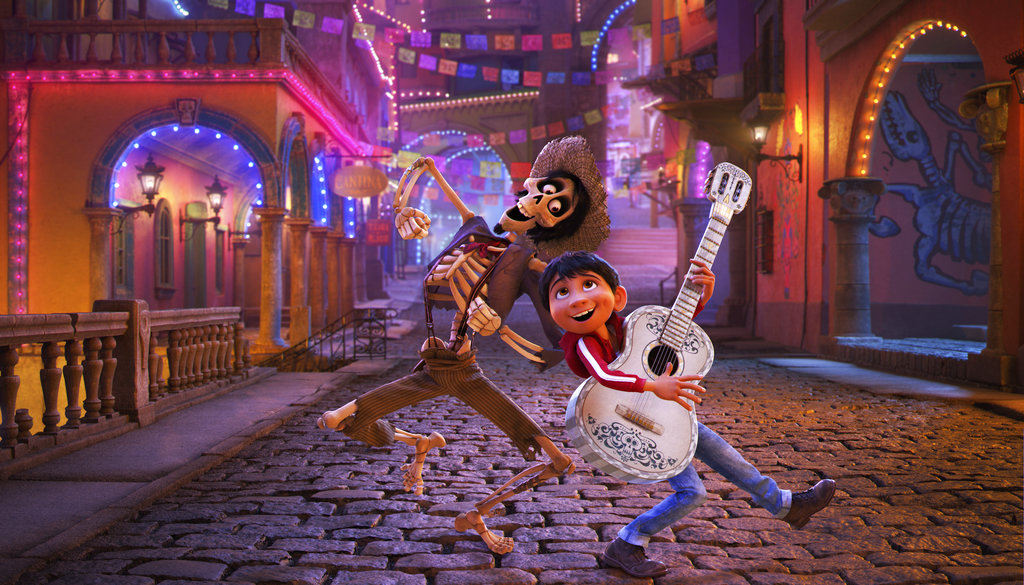 In this image released by Disney-Pixar, character Hector, voiced by Gael Garcia Bernal, left, and Miguel, voiced by Anthony Gonzalez, appear in a scene from the animated film, "Coco." (Disney-Pixar via AP)

In a sleepy post-Thanksgiving weekend at the box office, Pixar's "Coco" remained the top film for the second straight week while a number of Oscar contenders packed theaters in specialty release.

"Coco" again easily led all films with $26.1 million in the U.S. and Canada, according to studio estimates Sunday. The acclaimed animated tale based on the Mexican holiday Dia de los Muertos (Day of the Dead) has dominated new releases both domestically and abroad. It has already racked up a global gross of $280 million, including record-breaking totals in Mexico and an impressive $75.6 million in China.

The family film "Wonder," about a fifth-grade boy (Jacob Tremblay) with facial abnormalities, likewise stayed in third with $12.5 million. The sleeper hit of the season, also starring Julia Roberts and Owen Wilson, has taken in $88 million in three weeks for Lionsgate.

Among new releases, most successful was James Franco's "The Disaster Artist." The comedy opened with $1.2 million on 19 screens, good for a per-screen average of $64,254. The film, directed by and starring Franco, is about the making of the infamously bad cult movie "The Room."

With most studios staying clear ahead of the impending release of "Star Wars: The Last Jedi" (which some forecasts peg for a $200-million debut), much of the weekend's action was with awards-season releases. They helped drive the weekend to the biggest post-Thanksgiving weekend in five years, according to comScore.

Greta Gerwig's "Lady Bird," which spent the week collecting honors from the New York Film Critics Circle, the Gotham Awards and the National Board of Review, added 403 theaters, for a total of 1,194. The A24 release, starring Saoirse Ronan and Laurie Metcalf, earned $4.5 million, bringing its total to $17.1 million.

Fox Searchlight's "The Shape of Water," an acclaimed monster-movie fantasy from director Guillermo del Toro, opened in two New York theaters with $167,000. (The $83,400 per-screen average ranks as among the best of the year.) Searchlight's "Thee Billboards Outside of Ebbing, Missouri," also expanded to 1,630 screens and grossed $4.5 million. The Frances McDormand-led film has grossed $13.7 million.

The coming-of-age tale "Call Me By Your Name," which topped the Gotham Awards on Monday, remained in very limited release — four theaters — and pulled in an excellent per-screen average of $67,000. The Sony Pictures Classics last weekend debuted with the highest screen-average of the year. The film's young star, Timothee Chalamet, has emerged as one the leading best-actor contenders.

A scary box office weekend for everyone but Tyler Perry