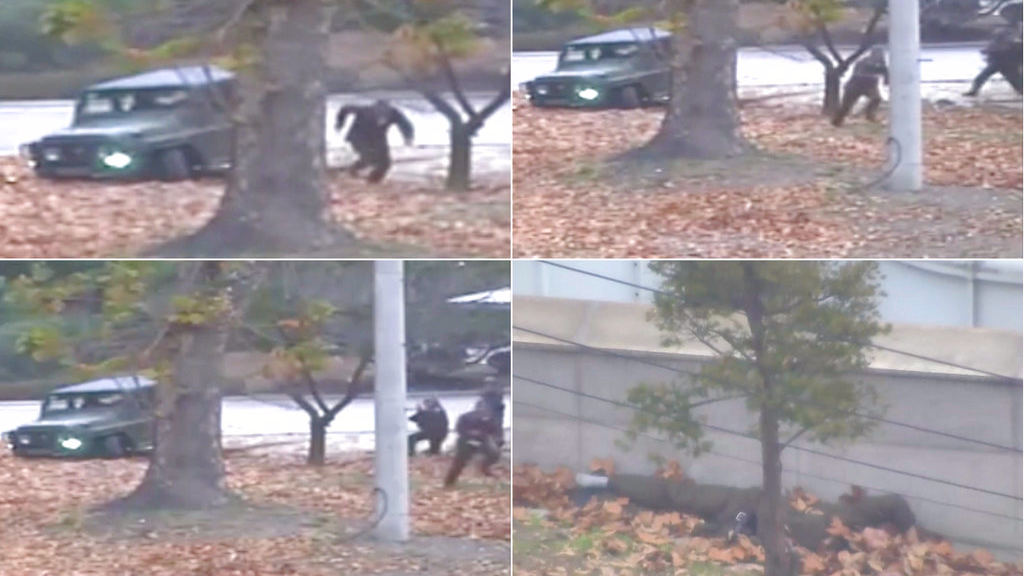 It's 3:11 p.m. on a cold, gray day on the North Korean side of the most heavily armed border in the world, and a lone soldier is racing toward freedom.

His dark olive-green jeep speeds down a straight, tree-lined road, past drab, barren fields and, headlights shining, across the replacement for the Bridge of No Return, which was used for prisoner exchanges during the Korean War. The shock of soldiers watching the jeep rush by is palpable from the video released Wednesday, and no wonder: They're beginning to realize that one of their comrades is defecting to the South.

They sprint after him.

The jeep slows and turns at a monument to North Korean founder Kim Il Sung, the staging point for North Korean tours of the area.

The border is near, South Korea just beyond it.

Four North Korean soldiers, weapons in their hands, race by the blue huts that straddle the border and are familiar to anyone who has toured the only spot on the perimeter where North and South Korean soldiers face off within spitting distance of each other. There are no tourists this day.

Right at the line that divides North from South, the defector crashes the jeep into a ditch. Seconds pass as he tries in vain to gun the vehicle out of the gully before leaping out and sprinting into the South. He kicks up leaves, ducking below a tree branch just as the North Korean soldiers skid into view.

Muzzles flash. The North Korean soldiers, one of whom drops flat into the leaves, fire at the defector at close range with handguns and AK-47 assault rifles — about 40 rounds, the South says.

Suddenly, two of the North Koreans run away while the soldier in the leaves jumps up and dashes across the dividing line into South Korean territory before stopping, turning on his heels and sprinting back to the northern side after his comrades. The defector, hit five times with bullets, falls stretched out and unmoving in a pile of leaves against a small wall on the South Korean side.

The entire sequence, from the first appearance of the jeep to the soldier's frenzied crossing, lasts four minutes.

It unfolded Nov. 13 in the Joint Security Area, which is overseen by both the American-led U.N. Command and North Korea and lies inside the 4-kilometer (2 1/2-mile) -wide Demilitarized Zone that has been the de facto border between the Koreas since the war.

Forty minutes later, the video has switched to infrared to show the heat signatures of two South Korean soldiers as they crawl on their hands and knees, using a wall as cover, toward the prone defector. They grab hold of the defector and drag him to safety. Not far away, heavily armed North Korean troops begin to gather near the Kim Il Sung monument.

For the moment, the border is quiet again.

Surprisingly, North and South Korean soldiers didn't exchange fire during the shooting, the first in the area in more than three decades. The bullets went in only one direction.

The defection, subsequent surgeries and slow recovery of the soldier have riveted South Korea. But his escape is a huge embarrassment for the North, which claims all defections are the result of rival Seoul kidnapping or enticing North Koreans. Pyongyang has said nothing about the defection so far.

North Korea's actions during the defector's escape at the Panmunjom border village violated the armistice agreement ending the Korean War because North Korean soldiers fired across and physically crossed the border in pursuit of the soldier, U.S. Col. Chad Carroll, a spokesman for the U.N. command, told reporters in a live TV briefing Wednesday. A U.N. Command statement said a meeting had been requested with the North's military to discuss the violations.

After undergoing two surgeries last week to repair internal organ damage and other injuries, the soldier has regained consciousness and is no longer relying on a breathing machine. His doctor said Wednesday he is enjoying watching American movies and shows such as "Transformers," ''CSI," and "Bruce Almighty," and listening to South Korean pop songs such as "Gee" by popular female band "Girls' Generation."

"He said it was so painful when he was shot by bullets but that he doesn't feel pain now," he said.

Doctors plan to keep him at an intensive care unit for at least several more days to guard against possible infection, hospital official Shin Mi-jeong said.

While treating the wounds, surgeons earlier removed dozens of parasites from the soldier's ruptured small intestine, including presumed roundworms that were as long as 27 centimeters (10.6 inches), which may reflect poor nutrition and health in North Korea's military. The soldier is 1.7 meters (5 feet, 7 inches) tall but weighs just 60 kilograms (132 pounds).

About 30,000 North Koreans have fled to South Korea, mostly across the porous border with China, since the end of the 1950-53 Korean War. Now add one more to that tally — a man in uniform, fleeing gunfire toward a new life one overcast afternoon across the world's most uneasy border.

Homeless US Samaritan to get house, dream truck, trust funds