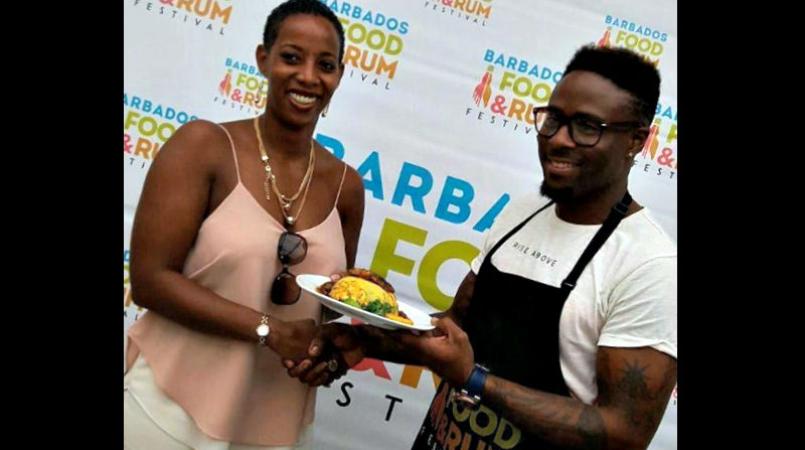 If you check the Bajan record books, two names will go down in history for selling the most expensive plates of cou-cou and fish, Barbados national dish.

In a celebrity cook-off recently between Eric ‘Rudefus’ Lewis and Kirk ‘Breezy’ Brown, cou-cou and flying fish was an expensive main course.

Rudefus narrowly edged out Kirk to win the competition according to the judges, but where the winning plate was auctioned for $300, Kirk’s own went for a whopping $325.

Rudefus said on his Facebook page, “Them 2 fellas cooked up a storm, all two both were winners.”

But because Rudefus is old school, his ability to ‘throw down’ in the kitchen was not questioned, it was Kirk who was in the hot seat.

“It was for charity. I like anything positive like that. It was part of the Barbados Food & Rum Festival. They just said Kirk could you come down to Palm Grill and battle.”

However, sheer luck put these two competitors together.

Laughing Kirk explained what led to the pairing.

“I was filling in for Vic [Fernandes]. It was actually meant to be Market Vendor versus De Queen, which would be more humorous. I was actually slated for the next Saturday, ‘Meet the Browns’, Kirk Brown versus Nikita Browne. But Vic had to travel unexpectedly, so I filled in.

“Rudefus versus Kirk was good fun.”

Speaking to how it was in the kitchen, he said:

“I stirred up a cou-cou as my grandmother taught me to make it, real Bajan with a thick stew and hearty cou-cou.

“I feel very proud and thank my family and gran from Britton’s Hill, because most of the attendees there said, ‘Kirk we surprised. We didn’t think you could make cou-cou, because we can’t even make cou-cou.’ I didn’t really think like that, it’s our national dish but it’s kinda dying. It’s not something that everyone can cook. Everyone can cook rice or macaroni pie, but it was great fun. It was great!"

So is Kirk one to soak his meal? Actually not!

“My method is, I use the traditional put in the meal, boil the water and stir, don’t stop, no lumps. It was very smooth.”

All the proceeds were donated to the Child Care Board.