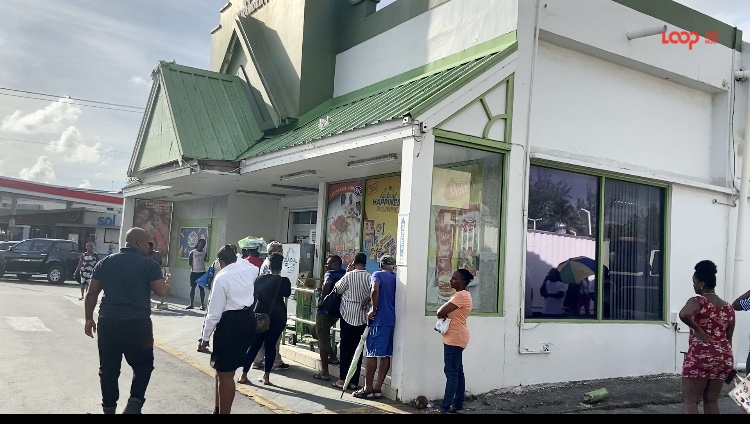 Scores of Barbadians lined up at Trimart Supermarket Rendezvous.

Panic-buying intensified this afternoon (April 2), as droves of Barbadians rushed to the supermarkets, minimarts and gas stations to stock up on food supplies and essential items before Government's mandated 24-hour curfew goes into action.

Supermarkets, minimarts, auto-marts in gas stations and restaurants will be closed from 5 pm tomorrow. Persons will only be able to be on the road to go to the pharmacy, to seek medical attention, if they are an essential service or if they are going to conduct business with essential businesses.

But shortly after Bradshaw's announcement, persons made a desperate attempt to purchase food and essential items before the islandwide closure. Along the South Coast of the island, Loop News witnessed long queues at minimarts, gas stations and supermarkets. Persons even came with umbrellas in hand expecting to be standing in line in the parking lots.

The decision was met with ire from some shoppers, such as Alisa Branch who expressed that some locals were refraining from shopping because of the long lines.  While acknowledging that the 24-hour curfew was anticipated given that some Barbadians have not heeded Government's warnings, Branch told Loop that the sudden announcement by Government would further increase panic.

"I believe the shutdown is necessary to stop COVID-19 from spreading [but] the shutdown was a bit sudden so it has caused a lot of people to rush to the supermarkets. People who are working might not be able to make it to the supermarket today so there will be a mad rush tomorrow, which I don't think was wise ... but you do what you have to do to curb the disease."

A Trimart shopper who asked to remain unidentified also pitched in with his conspiracy theory. Despite assertions from Prime Minister Mia Mottley that the island has enough food supplies to weather this turbulent period, the shopper suggested that the supermarkets could be closing for reasons that were "not genuine".

However, he too, like some others took issue with the fact that customers were only alerted at the last minute. He contended, that he was surprised by the decision and the announcement "that didn't give people proper notice to do their shopping."

Bradshaw cited that long lines have been evidenced at supermarkets across the island and despite Government's warnings, persons have continued gathering in large groups since the 8 pm to 6 am curfew was implemented March 28. Hence, these stringent actions were taken today in an attempt to curb the "reckless" behaviour of the public.

"The tough decision to close supermarkets with immediate effect is due to the fact that we are currently experiencing community spread of COVID-19.

"By allowing supermarkets to remain open, even if for just one more day, would defeat the purpose of social distancing as there will be a mass rush to purchase goods possibly allowing for further spread of the virus."

Barbados authorities contend that to date there is no community-transmission on island.