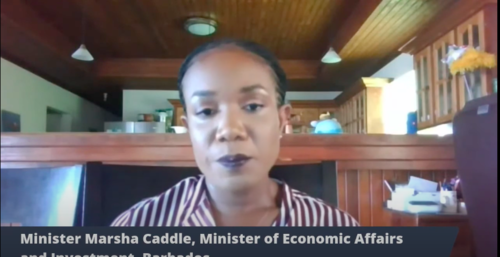 Minister in the Ministry of Economic Affairs, Marsha Caddle.

Barbados needs to address nutrition security not just food security for its citizens.

Minister in the Ministry of Economic Affairs Marsha Caddle was speaking during the Grow Local webinar on the topic 'The Future of The Caribbean: Sustainable Supply Chains, Trade and Agriculture', when she pointed out food security is not the key issue afflicting the small island state, but rather nutrition security.

Caddle stated that the health of citizens has been compromised due to the cheaper imported products that do not provide the best nutrition. Barbados is an epicentre for non-communicable diseases (NCDs) - eight out of ten deaths in Barbados are due to NCDs such as diabetes, cancer, heart disease and stroke.

"The globalization of supply chains has really meant that the kinds of products that are still able to make it to the market and are cheaper to come to the market in small islands like ours are not the ones that provide the best nutrition. The conversation we are having in Barbados is not just about supply and food security and making sure that we have if not a local but a regional CARICOM approach to that, but also how do we bring about nutrition security," Caddle remarked during her opening address.

She revealed that due to the outbreak of COVID-19, the purchase and consumption of local products from farmers and grocery stores have increased significantly.

"What we are finding more and more is that the COVID-19 pandemic provided a great opportunity for that because people started to focus quite a bit more on buying local and buying from local farmers. There has been a real galvanizing of support for local markets and we want to continue to build on that and to make sure that we don’t lose that momentum in terms of buying local," Caddle reasoned.

The noted economist reported that the country was not adversely impacted by the interruption to the global supply chain as countries closed their borders.

The F-word that really gives me anxiety during COVID-19