Crawley's 171 puts England in charge of 3rd Test vs Pakistan 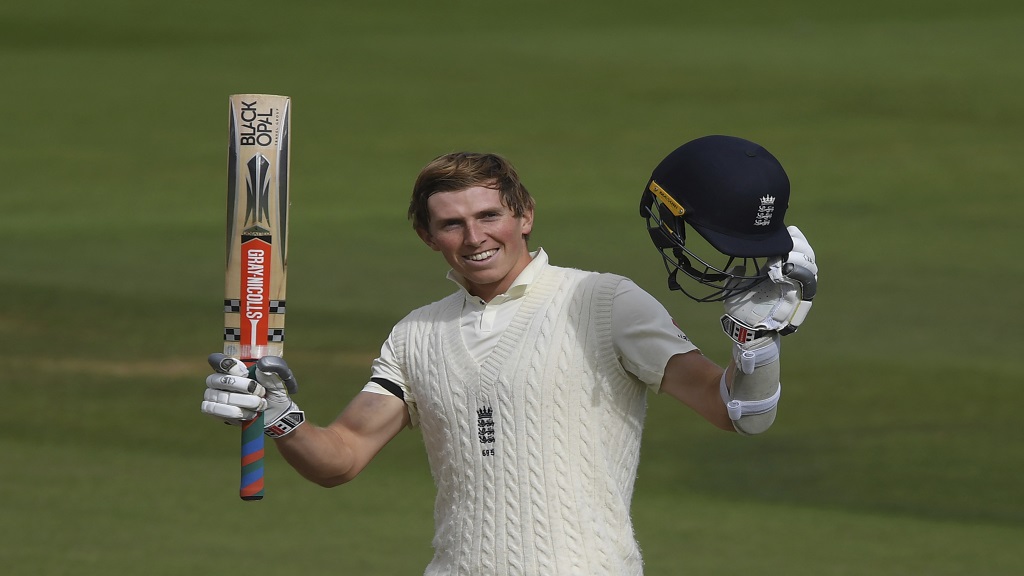 England's Zak Crawley raises his bat and helmet to celebrate scoring a century during the first day of the third cricket Test match against Pakistan, at the Ageas Bowl in Southampton, England, Friday, Aug. 21, 2020. (Mike Hewitt/Pool via AP).

Zak Crawley hit an unbeaten, career-best 171 and Jos Buttler was approaching his second Test century as England dominated the opening day of the third and final match of the series against Pakistan on Friday.

England closed on 332-4, with the fifth-wicket stand between Crawley and Buttler (87) worth 205 and Pakistan's bowlers looking demoralised in the isolated environment of the Rose Bowl.

Crawley struck 19 fours in a composed 269-ball innings that saw him more than double his previous best score of 76, achieved last month on the same ground in Southampton. The 22-year-old batsman is only playing in his eighth Test match because Ben Stokes is missing while he attends a family matter back in New Zealand, and now looks undroppable on this form.

It was the first Test century by a No. 3 batsman for England since November 2018, and a first on home soil in four years. The position has been a problem area, but perhaps no more.

“Best feeling I've had on a cricket field by quite a long way," Crawley said after being applauded off the middle by Pakistan's players then by England's players and officials on the balcony.

"To see everyone else up there on the balcony clapping, it kind of flashed before my eyes, almost my whole career, actually, so far. It was a great moment and hopefully I can get a few more.”

Buttler, meanwhile, produced another beautiful innings that will further quieten the critics of a wicketkeeper-batsman who has had a disappointing summer behind the stumps. He smashed legspinner Yasir Shah for two sixes down the ground, while his array of impressive shot-making included an exquisite back-foot drive through the covers.

It was Buttler's highest Test knock in nearly two years.

England lead 1-0 and are looking to clinch a first series victory over Pakistan in 10 years, as well as a second of the summer after beating the West Indies 2-1.

Pakistan face a tough task getting back into a match that looked like going their way on Day 1 when England were reduced to 127-4 following the dismissals of Joe Root (29) and Ollie Pope (5) after lunch.

The tourists then lost control amid the shot-making of Crawley and Buttler, with even the reliable Yasir losing his way and getting hit for 107 off 28 overs.

Crawley played for all but 4.3 overs of a day when 90 overs were bowled at a venue that was hit by rain and bad light in the drawn second Test last week.

England-Pakistan 2nd Test heads for draw after another washout