Cubana Airlines terrorist bombing 44 years ago not to be forgotten 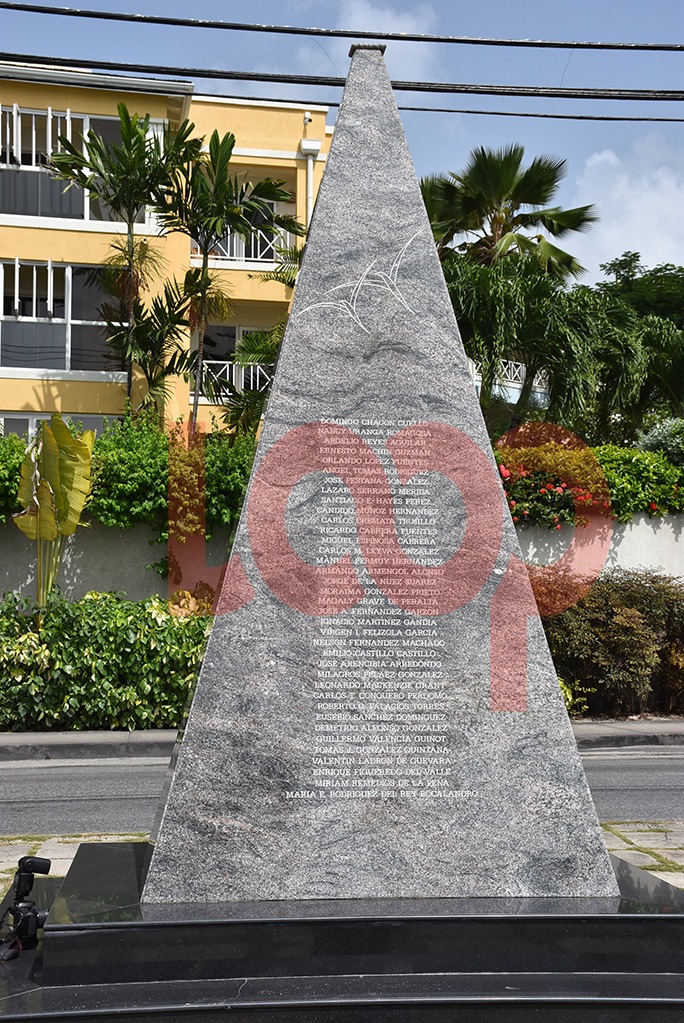 Forty-four years have passed but the loss of 73 lives in a Cubana Airlines bombing will not be forgotten, according to officials and community members who recently commemorated the 1976 tragedy when the plane crashed off the West Coast of Barbados in Paynes Bay, St James.

“We must remember that terrorist act and we must condemn it and demand justice,” stated David Denny, a representative for the Caribbean Movement for Peace and Integration, and President of the Cuban Barbadian Friendship Association.

Describing the terrorist bombing of Cubana Airline flight 455 on October 6, 1976 as a “criminal event against humanity,” Yaima Payne, President of the Association of the Cuban Residents of Barbados, also called for justice for the “families of all of those people who lost loved ones on the flight.”

Barbados’ Ambassador to CARICOM David Comissiong, who joined in the laying of wreaths at the commemorative monument in Paynes Bay, lamented the lack of punishment for some of the terrorists who planted bombs on the aircraft killing all passengers and crew.

“We profoundly regret that the two masterminds of that horrendous act of terrorism, Orlando Bosch and Luis Posada Carriles, were never properly brought to justice. They were protected by powerful forces, and have both gone to their graves unpunished for the great pain that they caused so many Cuban families, and indeed to the entire nation of Cuba,” noted Comissiong in his remarks at the 44th commemoration of the tragedy.

“We take some solace, however, in the fact that our country of Barbados played a crucial role in the arrest and prosecutions of Freddy Lugo and Hernàn Ricardo Lozano, the two functionaries who actually planted the bombs on the plane at Seawell Airport in Barbados,” he added.

“We also use this occasion to highlight our solidarity and to send a strong message globally, that we must stride towards a world where mutual respect and peace dominate and the seeds of hate, intolerance and terrorism are eliminated,” Comissiong further stated.

Cuba’s Ambassador to Barbados Sergio Jorge Pastrana pointed out that the average age of the 73 individuals aboard that day was just 30 years.

“Most of them were youngsters in the prime of life with many aspirations towards their respective achievements in study, work and sports. The young Guyanese students who were going to start their careers as medical doctors. The young Cuban fencing team that had won gold medals at the regional competition. Young North Korean diplomats on their way to their destination, and the crew of that flight. At departure, little could have they imagine what was prepared by criminals to cut short their dreams,” said Pastrana during his remarks.

Among those who attended the commemoration at the monument were the Cuban nurses who came to Barbados recently to assist with the COVID-19 pandemic. Pastrana noted that the nurses’ help would continue for an additional six months under an agreement with the Barbados Government.

“Those present here today are following the careers that they were not able to complete. It is in that vein that we citizens of the Caribbean must remember them and commit to the fulfilment of our lives in rendition of the dreams they were not able to achieve,” stated Pastrana, drawing a parallel between the Cubana victims and the Cuban nurses and other present at the commemoration event.