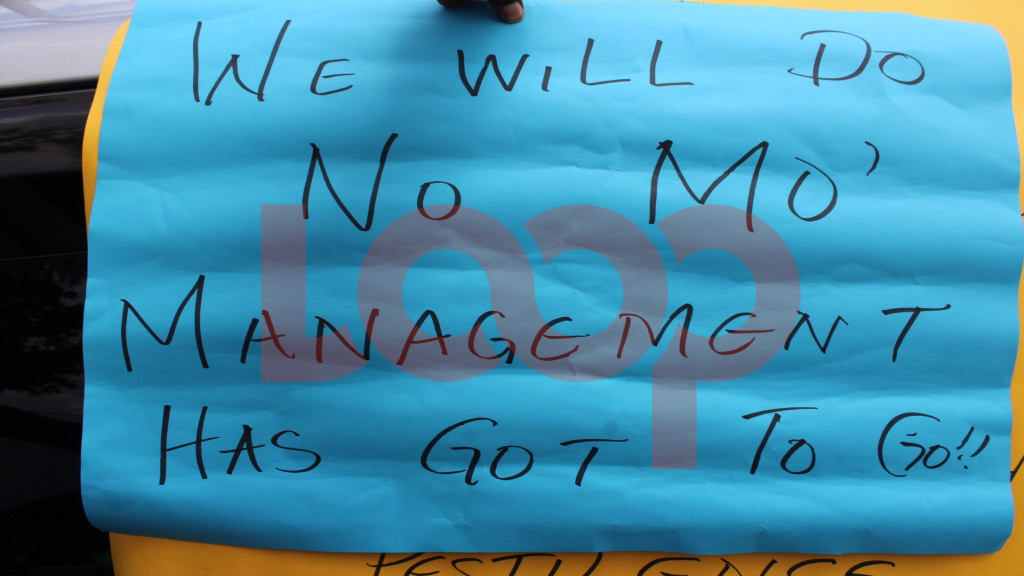 One of the placards displayed by a CXC staff member at the strike outside the Pine Street headquarters.

Management of the Caribbean Examination’s Council this afternoon referred to the ongoing industrial situation facing the regional body, over to the Chief Labour Officer Victor Felix.

Today workers, along with their bargaining agent, the Barbados Workers’ Union (BWU), took protest action up a notch after staging a sickout earlier in the week.

At issue for staff are vacancy advertisements which are being circulated by CXC, in the midst of ongoing negotiations with the BWU on restructuring the 47-year-old body.

In a statement issued this evening, the union’s Executive Council called for the ads in question to be pulled, noting that discussions were to be continued on June 3, but the outcome of those discussions was determined by the management, who posted advertisements for positions which were on the table for discussion.

“This action by the management was the final straw for the staff at the CXC who has been experiencing a number of challenges with the management.  The Executive Council has found the management of the CXC to be insulting and disrespectful, not only to the Secretariat but to the Staff of the Council.  It is unconscionable to post jobs currently held by persons on the market and those persons having no idea that their jobs are under threat.

This morning, Thursday, June 6, workers walked off the job and took up position in the carpark of the Prince Road, Pine Plantation Road headquarters bearing placards, outlining their disgust with the situation, and many pledged not to return until the situation was resolved.

In a release to the media this evening, Public Relations and Marketing Officer Folayan Taitt said CXC, in order to ensure full and open communication on worker concerns brought to the forefront by the BWU, Management participated in consultations.

“Throughout discussions, good industrial relations practices, as well as the rules that govern the organisation, have been adhered to. At this time, Management of CXC has referred matters under discussion to the Chief Labour Officer.

“During this process, Management is firmly committed to ensuring that the business of the Caribbean Examinations Council will continue without disruption,” the release noted, adding that the management of the Caribbean Examinations Council was committed to maintaining the highest standards of fair business practices, to achieve individual and organisational goals.