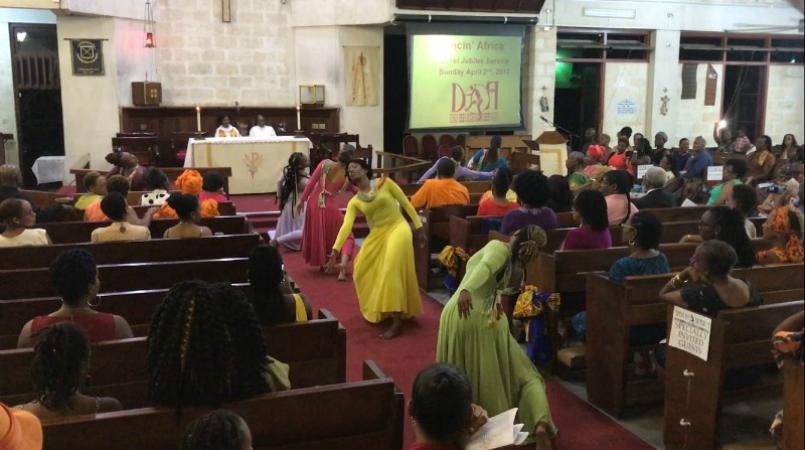 Award-winning Barbadian dance group, Dancin’ Africa hosted a number of activities in the month of April to commemorate their 25th anniversary.

Dancin' Africa returned to the environs of Passage Road Pavilion. its first home and community, to launch its Silver Jubilee under the theme ‘Bridging Communities, Crafting Legacies’ with a church service at St. Leonard's Church.

The service began with a procession led by its Directors and followed by founding members, senior company, junior company and children's troupe. The reverse order of this procession concluded the evening service which was also attended by parents, choreographers, well-wishers, other dance troupes and organisations which have paid tribute to the group over the years.

Permanent Secretary in the Ministry of Culture, Sports and Youth, Ruth Blackman, delivered remarks at the church service and offered Dancin' Africa valuable encouragement and support.. Also in attendance was Antonio 'Boo' Rudder, who was CEO of the National Cultural Foundation during the formative years of Dancin' Africa.

As part of its anniversary activities, the group also took to the grounds of the Carlton Cricket Club to host an inaugural sporting event ‘Dancing in the Lanes’ and as the name suggests there was much dancing involved.

There were races such as “Performance Ready” which required dancers to run a distance before putting on socks, shoes, a costume, and in some instances makeup with no mirror, and perform a dance movement to the finish line. Another crowd favourite was “Bud & Lou” which was a race for members of the Senior Company that required two members from each team and involved the performance of a number of lifting and carrying movements. There were also the traditional races such as the ‘Lime and Spoon’ and the three-legged race which all had elements of dance incorporated into them.

At the conclusion of the event Team Umoja came out on top with 168 points, followed by team Ajoule with 143 points, Kpanlogo with 131 points and LenJen with 103 points.