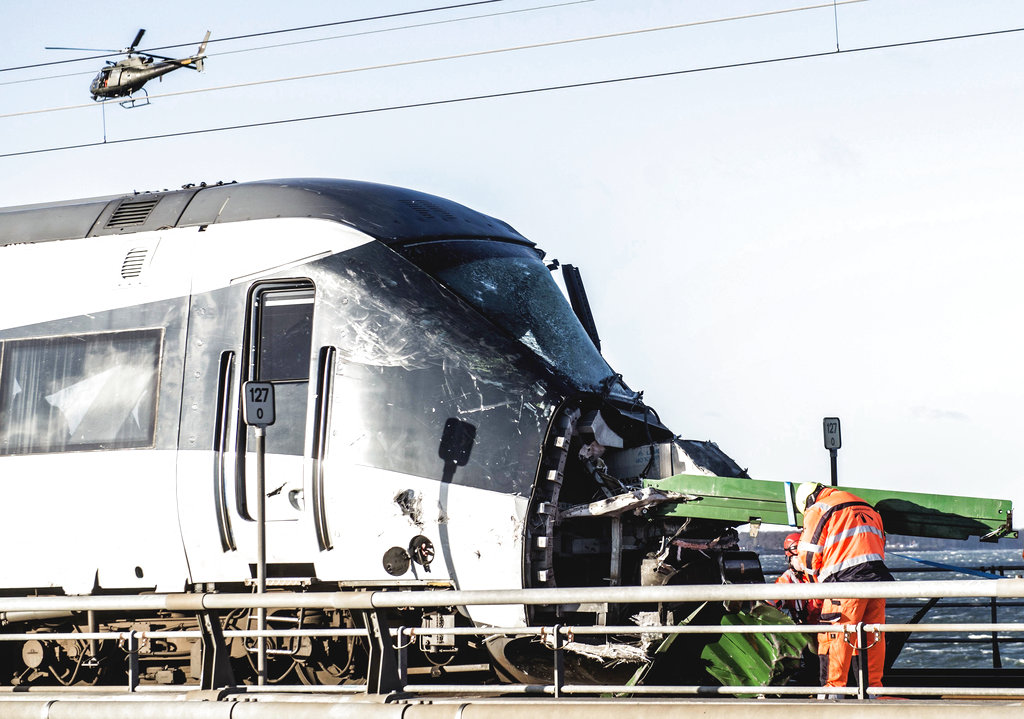 Rescue workers at the site of a train accident on Great Belt Bridge in Nyborg, in Denmark, Wednesday, Jan. 2, 2019. (Tim Kildeborg Jensen/Ritzau Scanpix via AP)

Two more bodies have been found in the wreckage of a crashed train on a Danish bridge, raising the death toll to eight in Denmark's deadliest train accident in 30 years, police said Thursday.

Police say three women and five men were killed in the Wednesday morning accident, and four of them have been identified. Sixteen others were injured.

All of the dead and injured were on a high-speed passenger train travelling on the Storebaelt system of bridges and a tunnel that link the central Danish islands of Zealand and Funen.

Authorities are investigating if cargo fell off a freight train and smashed into the passenger train as the two travelled in opposite directions on the bridge.

The Danish Accident Investigation Board has also said that strong gusts Wednesday could be a factor. At the time of the accident, the 18-kilometre (11.2-mile) Storebaelt link was closed to road traffic because of high winds but trains could still drive across.

Police said in a statement Thursday that the latest bodies were only found after the wreckage was pulled away from the crash site to a remote area near the town of Nyborg on Funen island. They said the damage to the passenger train "was so extensive it has hard to properly get into the most damaged area" while it was still on the bridge but added they are certain no more bodies are inside.

Divers also searched the seabed under the bridge overnight, looking for train wreckage and for more clues to explain the deadly accident.

Aerial TV footage and photos showed the front side of the passenger train ripped open. One container seemed to be missing from a flat wagon on the cargo train and a freight tarpaulin was torn into pieces.

Lars Braemhoej, a senior police official, has said investigators believe one possible cause of the "considerable damage" on the passenger train was getting hit by cargo that detached from the freight train. Still he said authorities "do not know precisely what caused the accident."

Since the wrecked passenger train was pulled away from the bridge, rail crossings over the Storebaelt link resumed Thursday from west to east. Train crossings in the other direction were expected to restart later in the day.