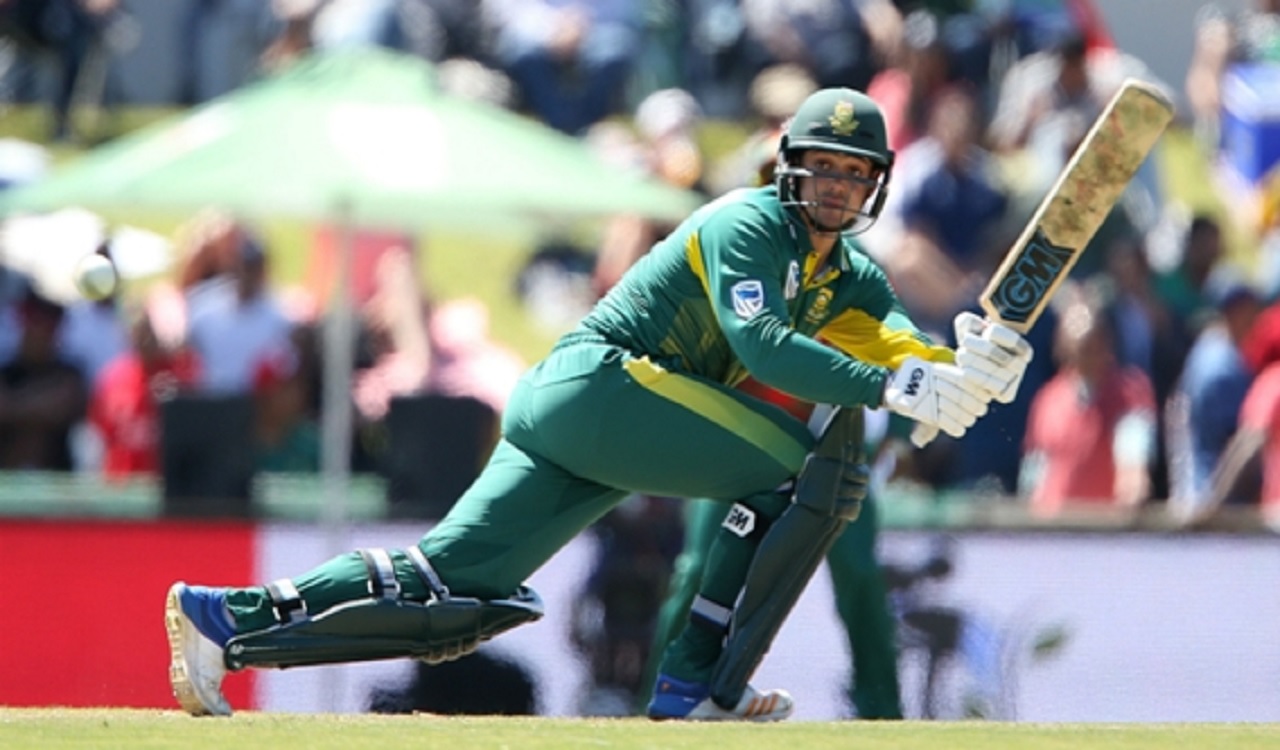 Quinton de Kock smashed his highest Twenty20 international score as South Africa continued their dominance over Bangladesh with a 20-run victory in the first game of the series in Bloemfontein on Thursday.

De Kock made 59 off only 44 balls and there were more fireworks from AB de Villiers (49 from 27) at the Mangaung Oval, where the Proteas posted an imposing 195-4 in the first of two T20s against the Tigers.

Soumya Sarkar gave the tourists hope with a 31-ball 47 at the top of the order and Mohammad Saifuddin was unbeaten on 39, but they fell short on 175-9 after debutant Robbie Frylinck, Beuran Hendricks, Andile Phehlukwayo and Dane Paterson took two wickets apiece.

Bangladesh were whitewashed in the Test and one-day international series' and South Africa will complete a clean sweep if they win in Potchefstroom on Sunday.

Mehedi Hasan (2-31) got an early breakthrough by rattling Hashim Amla's off stump, but De Kock and De Villiers set South Africa on their way to a big total with a stand of 79 after JP Duminy won the toss.

De Villiers had Rubel Hossain wincing when the paceman stopped a fiercely struck straight drive and inflicted further pain with classy boundaries on both sides of the wicket in an ominous start to his innings.

The former captain had struck six fours in seven legal deliveries when he dispatched Shafiul Islam to the boundary with disdain, but missed out on a half-century when he was caught in the deep by Mahmudullah to give Mehedi a second wicket.

Duminy announced his arrival at the crease by launching Mehedi over cow corner for six after the Proteas had reached three figures in the 11th over and De Kock brought up his half-century in style with a huge six off Shakib Al Hasan.

Shakib got rid of Duminy later in the over and Rubel trapped a furious De Kock leg before to leave South Africa 133-4 with five overs remaining, but Farhaan Behardien (36 not out off 17) struck some lusty blows and David Miller added a quickfire 25 in an unbroken stand of 62.

Soumya carried the fight for Bangladesh, striking Hendricks into the crowd over long-on in the second over before hitting another six and five fours in a swashbuckling knock.

The Tigers were going along nicely on 92-2 when Phehlukwayo snared Soumya leg before and the wheels came off after that blow despite the best efforts of Saifuddin, as the wickets were shared among an inexperienced Proteas attack.