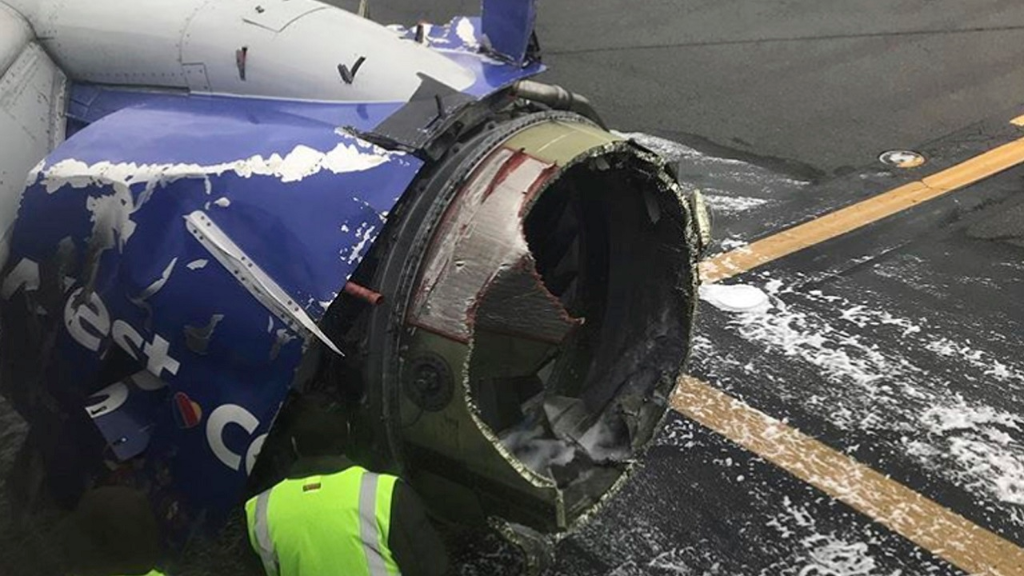 (Image: AP: The damaged engine of the Southwest plane)

A preliminary examination of the blown jet engine of the Southwest Airlines plane involved in a deadly incident on Tuesday showed evidence of "metal fatigue", according to the National Transportation Safety Board.

The engine blast set off a terrifying chain of events that left a businesswoman hanging half outside a shattered window. Passengers scrambled to save the woman from getting sucked out the window that had been smashed by debris. She later died, and seven others were injured.

The pilots of the twin-engine Boeing 737 bound from New York to Dallas with 149 people aboard took it into a rapid descent and made an emergency landing in Philadelphia.

The dead woman was identified as Jennifer Riordan, a Wells Fargo bank executive and mother of two from Albuquerque, New Mexico. The seven other victims suffered minor injuries.

The National Transportation Safety Board sent a team of investigators to Philadelphia.

In a late night news conference, NTSB chairman Robert Sumwalt said one of the engine's fan blades was separated and missing. The blade was separated at the point where it would come into the hub and there was evidence of metal fatigue, Sumwalt said.

The engine will be examined further to understand what caused the failure. The investigation is expected to take 12 to 15 months. Photos of the plane on the tarmac showed a missing window and a chunk gone from the left engine, including part of its cover.

Southwest CEO Gary Kelly said there were no problems with the plane or its engine when it was inspected on Sunday. As a precaution, Southwest said on Tuesday night that it would inspect similar engines in its fleet over the next 30 days.

Passengers praised one of the pilots, Tammie Jo Shults, for her cool-headed handling of the emergency. The former Navy pilot was at the controls when the plane made the emergency landing. She walked through the aisle and talked with passengers to make sure they were OK after the aircraft touched down.

"She has nerves of steel. That lady, I applaud her," said Alfred Tumlinson, of Corpus Christi, Texas.

Starbucks to close US stores for racial-bias training