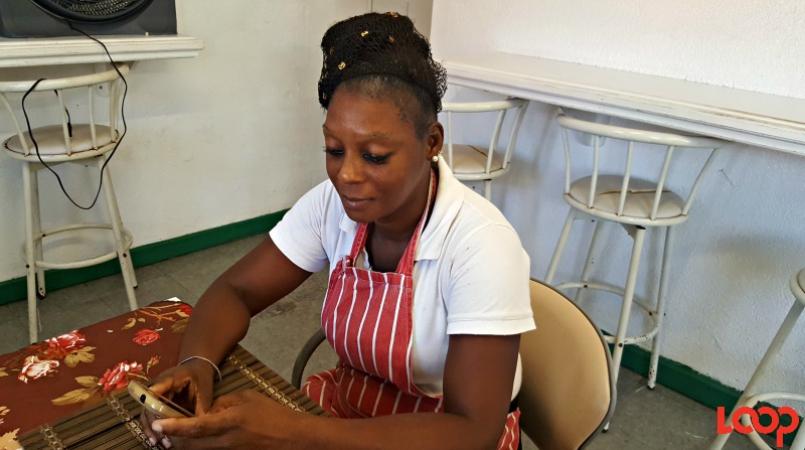 Althea Hunte is a mother, a general worker and she is very creative.

Though deaf, she has learned to communicate and understand despite the communication barrier.

Chatting with Loop she said that she has four children – three boys and one girl, and of the lot only the girl can sign very well.

She signed, “She was signing from three years old and as she grew up she learned and learned and knows a lot of signs now. I taught her by myself.”

Like her daughter, her youngest son who is five years old is always trying. He signs, “Mummy and always signs, ‘You understand’ after he shows me something or tries to tell me something.”

When it comes to her children and school, she signed that she tries; "With some teachers I understand, others not really."

At work, she said she knows her routine and reads lips or interprets actions. At O’neil’s restaurant in Warrens, she cleans, washes up, sweeps and mops. Her manager Magdalene Morgan said, “Working with Althea is the same as working with anyone else. Honestly, if she could hear, I could put more responsibility on her because she is that good of an employee.”

At the restaurant there is a poster showing the sign language alphabet and Morgan said that customers try finger-spelling to Althea. Many even ask where they could get one so they can practice and get better.

This is going three years that Althea has been employed at the establishment after taking a break previously.

During the lunch-time interview, someone observing asked if Althea could read and write or only sign, which led Loop to sign the question to her, and she quickly said, “Yesssssss! I can write and read. I read the newspaper!”

Asked if that is an assumption that people make, that because you are deaf, you are illiterate, she signed, “some”.

Althea explained that she can read well and from early, her oldest son’s dad bought him a phone. Both he and her daughter text her. They are 19 and 17 respectively. Her other two sons are ages eight and five. Only the youngest two live with her.

As this is Christmas time, Loop asked her if she will be going to church come December 25th and she signed, “no, too early”, then she laughed at the Loop reporter who attends church at 5:00am and goes to the park after.

On Christmas Day at her home, smiling the 42-year old signed that her tradition is cooking “too much food”.

Outside of work the mother said that she likes dressing up and looking pretty. She likes makeup and can braid. “I braid my own hair and other people’s too.”

When asked if she watches TV as well, she signed, “No, I be too tired. I always fall asleep then my son kisses my cheek, wakes me up and says go to bed and sleep.” They love that she explained, because the two of them love to watch cartoons all the time.

With many parents rushing to and through town this week to get their kids' gifts, this Christmas she explained she is saving for her home, but she will buy toys and books for her children, while their dad will buy them bicycles.

Finally, asked if there is one word she would like hearing people to learn to sign what would it be, with a smile, she opened her right hand, placed the palm on her chest and made a circle - "please".

Do not say 'hearing impaired'

Pageant King and Queen sign their joy at winning