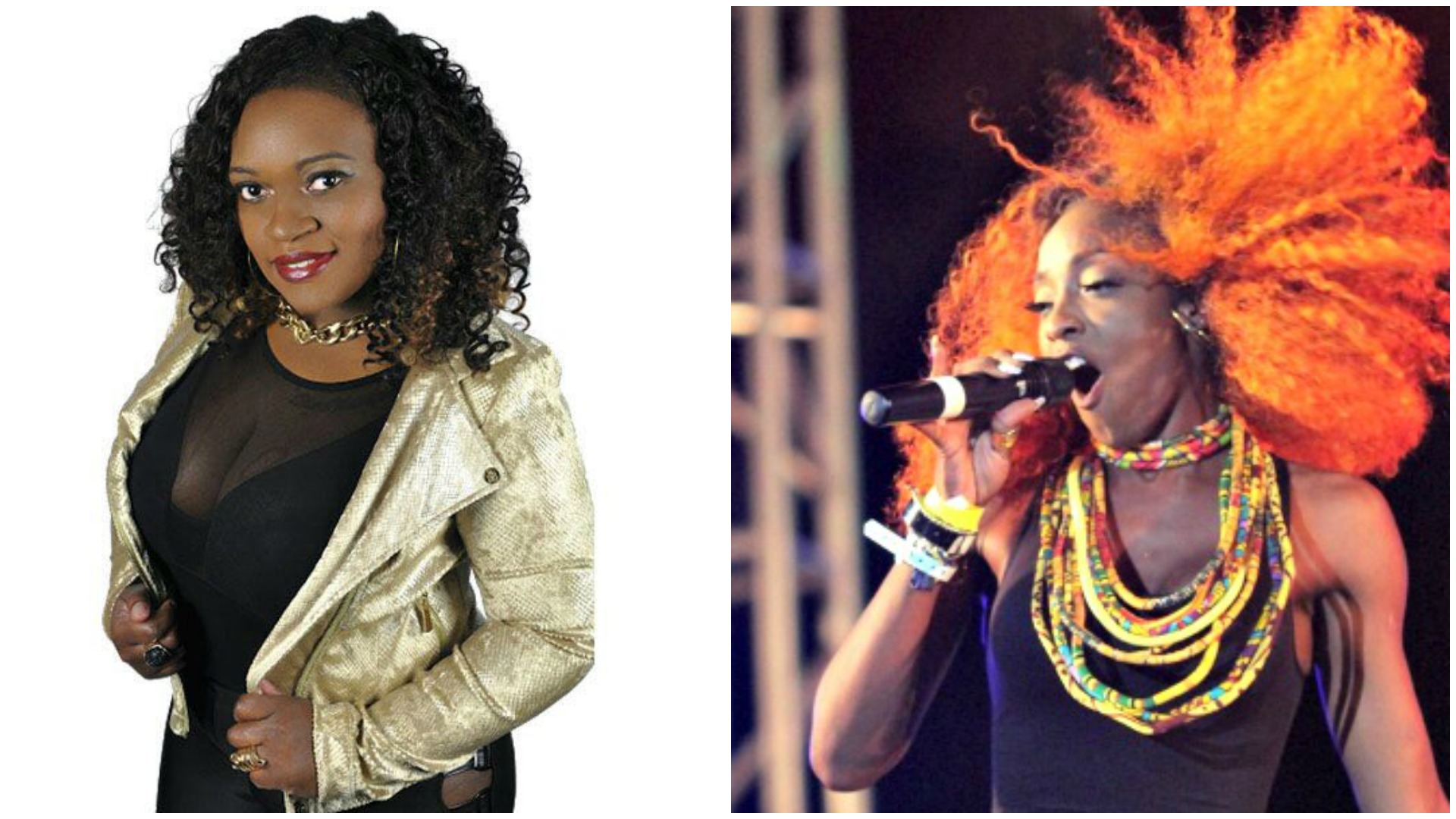 ‘I did not know until Monday morning’.

This is what both singers, DeeVine and Nikita have said, following the controversy surrounding their tracks ‘We De Same’ and ‘Same Way’ respectively.

DeeVine who was born in the UK and raised in Barbados told Loop News:

“I feel disrespected by Shaft, hurt and embarrassed also, because people are not interested in what I am going through just the third party. People are forgetting I bought this song with my hard earned money. I am an artiste as well that works hard. Why is it that only the third parties in this are being treated as the only ones who have had this horrible thing happen to them? It is legally my song and it has just been taken away from me, and no one cares.”

DeeVine’s ‘We De Same’ was released in 2015, written by Jason ‘Shaft’ Bishop and produced by his Shaft Vibes Entertainment. Consulting with her lawyer since Monday, she said, “I am a professional and would not sing a song if I was not authorised to do so.”

Saddened at this turn of events, she also disclosed, “I spent a lot of money on the song and recording, so it was very expensive.”

This point was also made by Nikita’s manager Richard Haynes of South Central. He said that Nikita too bought her track and paid Shaft.

Haynes debunked the belief that Nikita stole the song, and stressed that Nikita is “entirely correct. She has done nothing wrong at all.”

Haynes said that she shopped for the song as is commonplace. De Red Boyz brought the track to Nikita and he insisted, “I have the utmost respect for [them] in terms of their integrity and the way they do business. So they got this song from Shaft. They did their due diligence and the song was never released before and this was confirmed by Shaft in an email that the song was never released before etcetera. So to all of our surprise when the song was released, we then found out immediately that the song had already been released in 2015 by an artiste called DeeVine. When I say released, I must stress that the song was called ‘We de same’ that DeeVine had released and not ‘Same Way’ that Nikita had released.”

Haynes asserted that this entire controversy had him worried about Nikita’s brand, so he is clearing the air.

“I was very concerned about her brand because it could be misinterpreted that she had taken somebody’s song and ran with it basically, which is the furthest thing from the truth, because Nikita, this project she has pioneered by herself. It wasn’t like her other two songs that the company brought to her. She pioneered this song by herself. She bought the music. She paid Shaft. She paid for all the recording sessions with De Red Boyz and De Red Boyz went out of their way to make sure the recording is epic… Nikita really put in a huge effort to ensure that the song was of a standard to be an international hit.”

He said when she found out, it was very “unfortunate, because not only is Nikita out of pocket, it also sheds some kind of doubt over not only Red Boyz but Nikita. You know, are these guys taking music from people? So my thing is to immediately clear the air that it had nothing to do with Red Boyz. They had done their due diligence and it is a far stretch from the demo.”

By 2:00 p.m, today, Wednesday, May 24, Haynes disclosed that he had a meeting in Barbados with Shaft and his manager and he said that a press release will be issued this evening and Haynes said, “Shaft has taken responsibility and I respect him for that. It seems to have been one of those errors that tend to happen every now and then in the entertainment business. By no means does it seem to have been a purpose plan to try and sabotage Red Boyz, South Central or Nikita.”

In terms of pulling the song, Haynes said the song is holistically-owned by Nikita and De Red Boyz so he cannot make that call but as her manager he said, “I would let the song ride.”

Nikita’s next two songs were done ‘in-house’ and are “very tight in terms of publishing and so on,” assured Haynes. One is recorded through Platta Studios with Romel Ward and the other is entirely a product of South Central using Studio B and Haynes’ partner Central Records in Trinidad, who wrote the song called CARIfestival.

UPDATE: Shaft and his management team this afternoon released a statement in which the songwriter said he "genuinely forgot" DeeVine had previously recorded the song and attributed the misstep to not having a proper classification system.

"Shaft regrets he did not have a system in place then to prevent such and is truly sorry for the stress this may have caused all parties involved," read the statement, while noting that the songwriter is legally allowed to give the song to another artist. 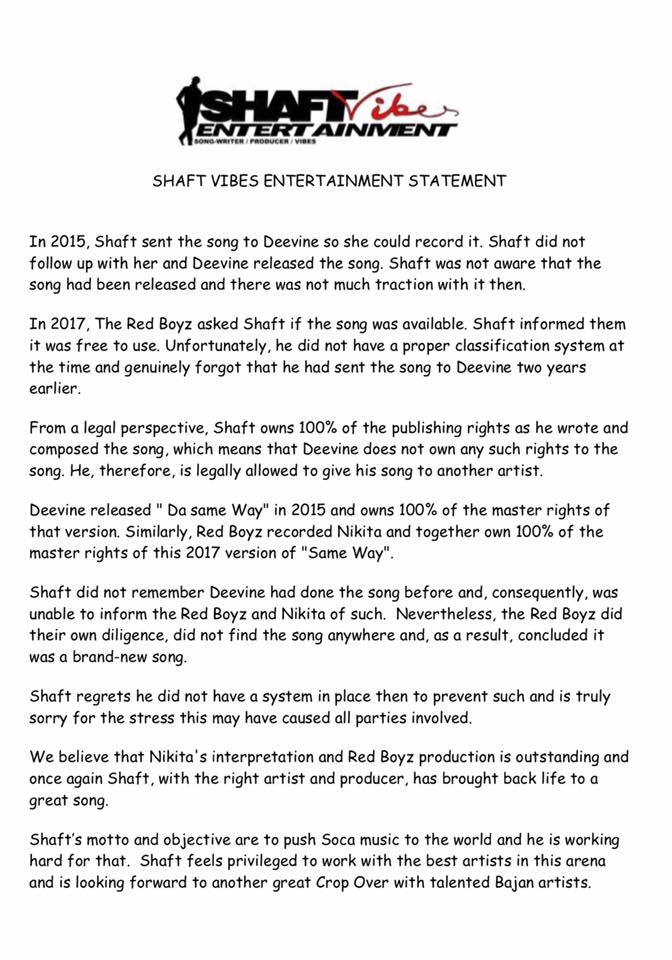 This is not the first time that Bishop has been the songwriter of a piece that was used by different artists.

Bajan artist Faith Callender had a similar experience in 2015 with her release 'Take Me Out', which was also written by Bishop and produced by De Red Boyz. The same song was previously released in 2014 by Trinidadian artist Dilena Diamond under the same song title, but produced by Samuel Jack.

Bishop, who was named the Best Songwriter for Crop Over 2015, has penned major hits for top artists across the Caribbean, including 'All Ah We' (Peter Ram) and 'Home Sweet Home' (Edwin Yearwood), which have one major soca competition titles.

A similar situation occurred when Barbados-based Trinidadian artist, Farmer Nappy, released De Red Boyz produced 'Big People Party' in 2014 after St Lucian Teddyson John had released a similar track in 2012 with the same title. The songwriter, in this instance, was Steve Sealy of Ghostwriters Music. 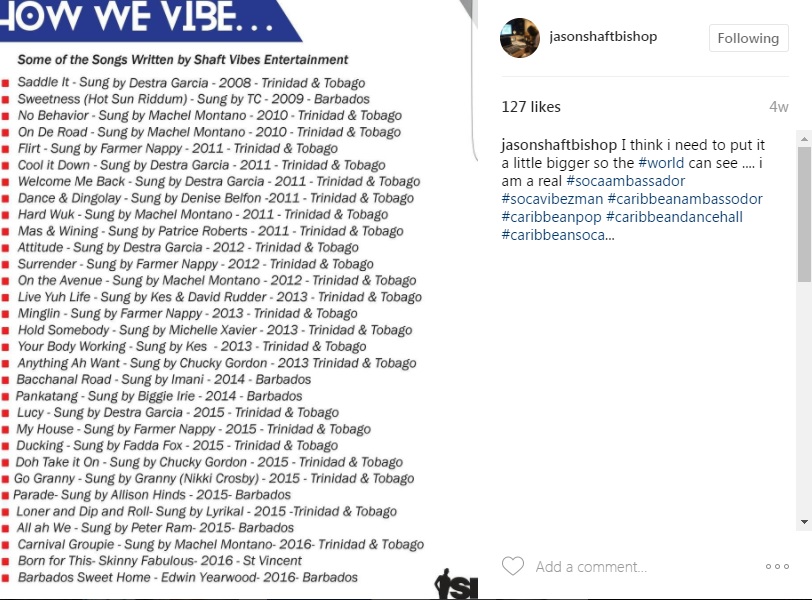 Write for yourself, says Bunji Garlin

Shaft ready for Crop Over